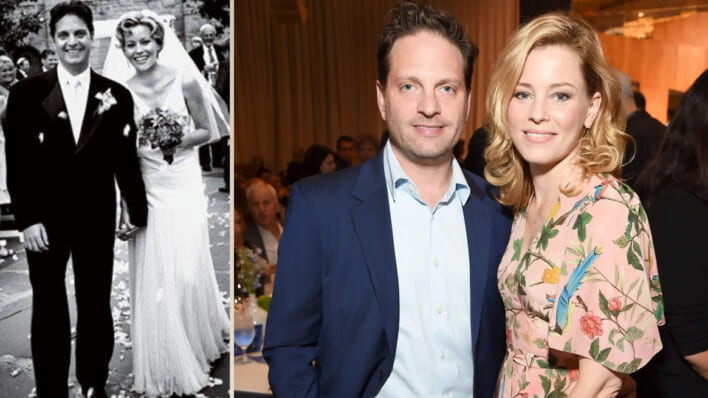 Elizabeth Banks and Max Handelman have been together for 30 years, and married for 20. Raising two young sons and working together every day, Banks declares, “There’s love. And there’s lust. So it’s great.”
By Laurence Lerman    October 15, 2022

Elizabeth Banks and Max Handelman have been together for 30 years, and married for 20. Raising two young sons and working together every day, Banks declares, “There’s love. And there’s lust. So it’s great.”

An actor, producer, writer and director, Elizabeth Banks is best known as a three-time Emmy Award nominee for her roles on Modern Family and 30 Rock. However, she has also come on strong as a respected big-screen talent in The Hunger Games, Love & Mercy, W., and the Pitch Perfect franchise. The latter was produced by Brownstone Productions, the company founded in 2002 by Elizabeth Banks and husband Max Handelman.

But before all the hard work and dedication needed to launch, and then maintain, her Hollywood career, Elizabeth Banks made a crucial decision in 1992, on her first day at the University of Pennsylvania.

That’s when Elizabeth met fellow student Max Handelman. The two immediately embarked on a romantic relationship that continues to this day.

After college, Handelman set out for an MBA (which he earned at UCLA in 2003), while Banks made inroads into her blooming acting career. She appeared in such early-2000s hits as Wet Hot American Summer, Seabiscuit, Spider-Man and Spider-Man 2. During the early days of their marriage, the pair’s careers took up the majority of their time. Handelman worked as an investment banker before becoming a director at News Corporation, where he helped to launch Fox Sports’ fantasy football division (and co-wrote the book Why Fantasy Football Matters: (And Our Lives Do Not)). Banks, meanwhile, was hopscotching across the country, making movies.

In 2002, Banks came up with the idea that she and Handelman should form a film and television production company. Thus, the What to Expect When You’re Expecting star “dragged him into the industry.” They formed Brownstone Productions in the fall of that year.

“He worked an 80-hour week,” Banks said. “I was traveling all the time in a career that requires me to film on location for up to six months of the year. Forming the company really was about trying to combine our professional and personal goals.”

Banks and Handelman Are Producers and Executive Producers

Brownstone is best known for producing the Pitch Perfect films as well as the hotly anticipated Pitch Perfect streaming series, Pitch Perfect: Bumper in Berlin. Banks directed the second entry in the series, Pitch Perfect 2, the highest-grossing musical comedy movie of all time, with a box-office take of $287 million worldwide. It also marks the biggest-ever opening for a first-time feature film director, and the second-largest debut for a female filmmaker.

Not surprisingly, the sequel to Pitch Perfect 2, the aptly named Pitch Perfect 3, is the second highest-grossing musical comedy of all time, ringing up $185 million globally.

Box office-smashing record notwithstanding, Banks considers her greatest accomplishment to be her thriving relationship with her husband.

“It’s the thing I’m most proud of,” she said. “I do think people grow together or they grow apart. We definitely grew together. We were constantly making decisions that kept us close.”

However, Banks and Handelman aren’t resting on its Pitch Perfect laurels. Their Brownstone Productions has a varied slate of projects, including the science fiction thriller Surrogates, with Bruce Willis; Walk of Shame, starring Banks and James Marsden; and the lauded TV series Shrill, starring Aidy Bryant, on which they served as executive producers.

More recently, Brownstone produced a couple of noteworthy reboots, the first being 2019’s Charlie Angels, which Banks directed and co-wrote. That was followed by the TV game show Press Your Luck, which Brownstone transformed into an even more popular prime-time program.

RELATED: Is Olivia Wilde the Most Controversial Director in Hollywood?

The original daytime show ran for three seasons, until 1986, while the new version is currently in the middle of the fourth season. One reason the reboot is doing so well is, undoubtedly, the presence of the lively and encouraging Elizabeth Banks as host.

Yes, Banks is one of the show’s producers, and knows that her hosting lends itself to the bottom line. However, she is also happy to offer another very positive reason that she’s on board with being on-camera:

“I’m on Press Your Luck because I love that job,” said the Charlie’s Angels director. “It’s fun to change people’s lives with money.”

Brownstone has some dozen films in development or production, among them the thriller Cocaine Bear, directed by Banks, and the romantic comedies Tink and Queen for a Day. Also in development is the horror-thriller The Invisible Woman, which Banks is lined up to direct and star in.

Brownstone also produces a pair of podcasts, both hosted by Banks: My Body, My Podcast, a wellness/sex/motherhood-themed program; and the upcoming scripted ensemble comedy Fugly.

Banks and Handelman Bring Their Kids to Work

Handelman is a co-producer on all the projects, of course. The couple’s young children can be considered part of the team, as well. At least when it comes to The Invisible Woman, as Banks established during the making of Charlie’s Angels that she has a very open policy about parenting on her set and thinks it’s okay to bring one’s children to work, as it were.

“We should be having whole lives – I don’t need to separate my work from my kids as much as I used to. There’s an old stigma about that,” Banks insisted. “For me, I throw all the rules out and invite my kids into my work life, because I want to be with my kids and I want to do great work.”

So it looks like a lot of fine decisions have been made during the course of Banks and Handelman’s three decades together, resulting in an active family, thriving careers and a life that finds them working daily with their very favorite people: each other.

“We have always dreamed about our life together. And we work together every day, and we have a lot of respect for each other on every level, says Banks. “And then there’s love. And then there’s lust. So it’s great.”