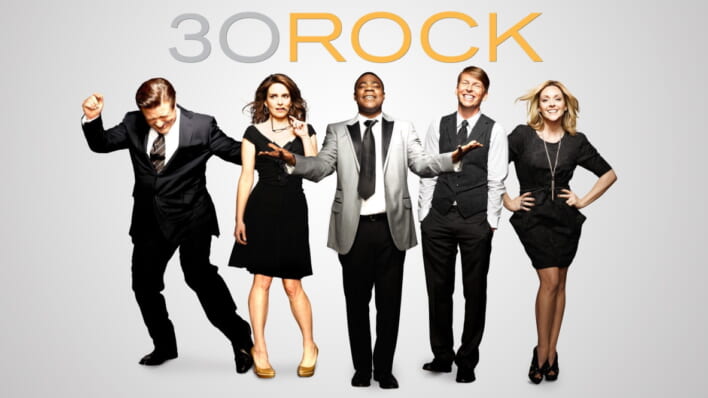 Tina Fey’s ’30 Rock’ Was a Ruthless Attack on Pop Culture – Did It Have to be?

30 Rock is known for its cartoonish and fast-paced tone, but its depiction of work culture is as nuanced as it is mocking.
By Jeff Liddell    June 25, 2022

30 Rock is known for its cartoonish and fast-paced tone, but its depiction of work culture is as nuanced as it is mocking.

People have referred to various concepts when trying to conceive the best possible purpose for comedy. One common interpretation is that comedy tells the truth about life’s hardships through a tone that makes the audience comfortable.

One of the most common of these challenges is struggling to find satisfaction in one’s career. Indeed, the pressure to face the challenges of a professional life and how society ties it to your identity is a ubiquitous experience.

Despite this, until recently, working life was seldom addressed in a comforting way that truly acknowledged nuance, but there are always exceptions. In the case of television, it was the rise of “quality” shows in the 2000s, which included comedy.

RELATED: 22 Tina Fey Quotes That Will Help You Face Life Like a Boss

Usually represented in the public consciousness by the appropriately named series, The Office, many of these modern comedies were about the workplace, and used their settings as an excuse for episodic hijinks, instead of critiquing the culture of the depicted industries. It’s Always Sunny in Philadelphia, for example, is about a quintet of lousy bar owners, but the bar itself is more of a reflection of the Gang’s psyche and lifestyle than anything that could be approached satirically.

To contrast Always Sunny, there is 30 Rock, the implicit satire of which specifically targets its own industry, and as a result, shows the full potential of an ultimately motivational workplace sitcom as a subgenre of comedy.

An artist’s past experiences will inevitably leak into their work. It tends to be subconscious, but within the realm of world-building, directly picking influences from one’s own life and acknowledging it is becoming increasingly more common. Comedy is no exception. On American television, this practice ranges from just naming characters and locales after familiar people and places like The Simpsons, to just having the creator play themselves in their own life, like Curb Your Enthusiasm.

30 Rock’s approach is closer to Curb, but takes enormous creative liberties with its source material to portray the rewarding and exhausting sides of professional life, specifically one in the television industry. It is no secret that the series is heavily based on, and sometimes directly retells, the experiences of creator and star Tina Fey on Saturday Night Live. Fey’s character, Liz Lemon, is the head writer of a fictional Saturday Night Live parody, a role Fey famously had on the real SNL. Liz is even named after Fey, whose legal first name is Elizabeth.

Other parts of the show that directly mirror Fey’s life include the characters of Jack Donaghy and Tracy Jordan, written with their actors in mind.  Jack is also based on SNL creator Lorne Michaels’ likeness. The show’s title came from a common nickname for 30 Rockefeller Plaza, its setting and the real filming location of Saturday Night Live. It might seem like a cop out, but this easy form of identification indicates the show’s intentions of being blunt in its satire.

Of course, like most shows, 30 Rock’s connection to the real world is only at a surface level. Aside from a few namesakes and personalities to model the writing after, what is depicted in the show is very much completely fictional. Nevertheless, the series frequently takes inspiration from real world events to specifically satirize real issues that mirror the characters’ own lives.

Like most episodic shows, let alone most comedies, 30 Rock makes the most out of the smallest ideas, such as insults or a network policy. Both of these aforementioned topics were the focus of two early episodes, with the former specifically focusing on a slur (“The C-Word”) and the latter being about NBC’s environmentalist PR stunts (“Greenzo”). They demonstrate the show’s intentions, even early on, to address the frustrations related to the television industry’s work culture, and how they damper a potential joie de vivre.

“The C-Word” is a self-explanatory title, and while it is a fairly mundane plot from a conceptual standpoint, is based on something that actually happened to Tina Fey. The episode’s way of approaching the issue shows that while a boss is usually the main cause behind problems with their employees, the employees themselves can be just as alienating with their own rhetoric. Liz is toxic enough as a boss and co-worker to warrant harsh insults, but Lutz went too far with his own choice of words.

RELATED: Why Tina Fey and Jeff Richmond Are a Great Example of What Loyalty and Trust Should Look Like

“Greenzo” is a hostile response to performative statements that NBC forces its shows to make. In this case, the episode is an intentionally ludicrous story about environmentalist television, which is usually motivated by optics and profit than any concern for nature. When the main plot is kicked off by a challenge to make money off an environmentalism “trend,” it is clear that the writers have a bone to pick with NBC’s policy and aim to depict it as one of the most cynical habits in the commercial world.

These episodes are some of the show’s more self-contained. The events that transpire in their stories are rarely mentioned in the series’ remaining episodes, if they are even referred to at all. However, they are an excellent introduction to the show’s meta approach to satirizing, and indicate how deeply intertwined with character development the satire actually is.

30 Rock and Happiness: Personal and Professional

30 Rock is, at its core, about television and the challenges that come with working in it. It could have easily just focused on the creative aspects of production to both make it easier for the writers and make these “underdog artists” in the cast easier to root for.

However, the show decided to challenge itself, and therefore, its viewers. Happiness is a recurring theme in all seven seasons of 30 Rock, and the characters’ pursuit of it is a demonstration of the personal depending on the professional.

Liz and Jack are theoretically on opposing sides of the professional spectrum. The former is on the artsy side, a writer whose career became the sole focus of her life due to everything else being lacking. The latter is a businessman, a “properly educated” and performatively sophisticated man that intentionally connects his satisfaction with life to his professional success.

Both are single-mindedly obsessed with their jobs, but Liz’s fixation is out of emptiness, whereas Jack’s is out of presumed fulfillment. Their respective schticks as comedic characters reflect their initial relationships with their jobs. Gloomy Liz is neurotic and clumsy, and confident Jack is slick and competent.

The other characters are just as affected by the fictionalized NBC’s nefarious environment. Tracy and Jenna are both demanding actors that are prone to acting nonsensically just for the sake of it. They contrast each other by their motives and circumstances.

Tracy is an established star and afraid of his own mortality. He partakes in stereotypical celebrity hijinks to preserve what actually fulfills him: his loving relationship with his wife. Jenna, despite her intense narcissism, is a B-list celebrity at best, and the reality of her shortcomings cracking her self-satisfied façade makes for some of the show’s most bombastic jokes, especially in the later seasons.

The most important characters are not the only ones to depend on their jobs for happiness. Some of them, like Pete and Frank, use NBC to escape misery. For others, such as Lutz and Toofer, their jobs at The Girlie Show contributes to their own downward spiral. The one outlier is Kenneth, who ends up becoming the writers’ most prominent tool to mock professional culture.

Kenneth is chipper and oblivious, despite being at the bottom of the NBC hierarchy as a page. His sincere love for television is mitigated by his simplistic taste in programming. But his character is an outlier. For every positive trait, there is something else to contrast it. Kenneth is the ultimate symbol of 30 Rock’s mostly absurd interpretation of television work. Through his role, the writers tell viewers that only a being as ridiculous as him could be gratified by spending a lifetime with a TV network.

All these characters’ identities are tied to their professions, but the existential questioning of their satisfaction with their own lives is persistent, and does not leave, even after the series finale. That being said, 30 Rock ends on an optimistic note, even with a bleak and cartoonish take on life in the TV industry.

Liz learns that she genuinely loves working and manages to balance out the time spent with her career and her personal life, which has the kids she always wanted by the end of the show. Jack finally finds meaning in his lifelong ambitions with a career-defining invention. Jenna and Tracy come to terms with the end of their current celebrity shenanigans by legitimately appreciating what their lives gave them. Kenneth’s passion for the industry pays off when he becomes CEO of NBC, a position the canonically immortal character still holds generations later.

The show created caricatures out of its ideas, but also humanized them, and used the empathy of viewers to its advantage. By amplifying the entertainment industry’s negative aspects to make a point about the absurdities of American work culture, 30 Rock created a believable ensemble whose own joy was both a reflection of the intended audience reaction, and a worthwhile goal in itself. It was a refreshing satire due to being realistic without falling into the trap of cynicism.