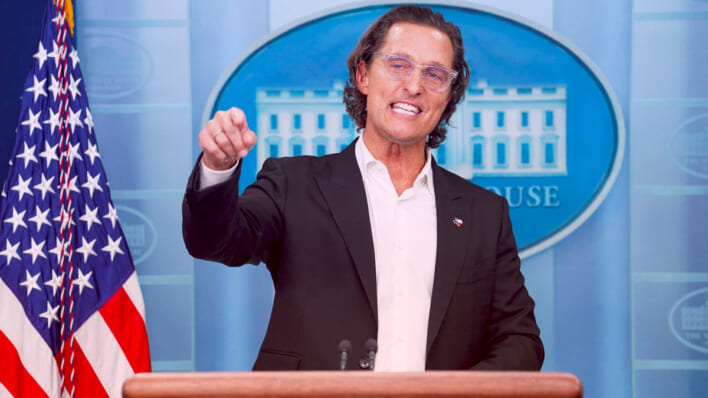 Matthew McConaughey’s speech at the White House press briefing on the Uvalde mass shooting was a very public call to action. But does it have the power to elicit real change?
By Bianca Mercuri    June 13, 2022

Matthew McConaughey’s speech at the White House press briefing on the Uvalde mass shooting was a very public call to action. But does it have the power to elicit real change?

Tuesday, June 7, 2022, Academy Award-winning actor Matthew McConaughey appeared at the White House press briefing to ask congress to pass gun control legislation on behalf of the children and teachers who were killed in the Uvalde massacre.

Mass shootings in the U.S. are more common than many citizens would like to admit, with more than 250 mass shootings taking place in the US in 2022 alone. The May 24 Uvalde elementary school shooting hit a little too close to home for McConaughey. The Texas native is actually from Uvalde and addressed growing up in this warm Texas town.

McConaughey’s plea for gun control might have been the most compelling case for gun reform from a celebrity yet, given his connection to Uvalde. He prefaced by saying, “Uvalde is where I was taught to revere the power and the capability of the tool that we call a gun,” he stated. “Uvalde is where I learned responsible gun ownership.”

But for McConaughey, it’s more than that: he’s also a gun owner, himself, saying that he and others are “fed up with the Second Amendment being abused and hijacked by some deranged individuals”.

His stance on guns and his Uvalde roots set a particularly telling stage, particularly as his plea became more impassioned and emotional. McConaughey shared stories of and spoke on behalf of the victims who could not be there to do so.

He and his wife, Camile Alves, spoke about the time they spent time with the families of those who were killed. He used his White House speech to show pictures and artwork of the children, as well as the actual shoes that were used to identify the body of a little girl.

Because the shooting was perpetrated using an AR-15 rifle, most of the bodies were mutilated to the point where only DNA tests or pieces of clothing, like the shoes of that little girl, were able to identify them. This was not the only time emotions ran high in the totality of his 20-minute call for action, though.

McConaughey’s speech truly was a call for action to congress. “How can the loss of these lives matter?” he asked, “While we honor and acknowledge the victims, we need to recognize that this time, seems that something is different.”

He asked Congress for background checks for gun purchases as well as to raise the minimum age to purchase an AR-15 and similar rifles to 21 from the current minimum of 18-years-old. He also suggested a waiting period for purchasing AR-15-style rifles and “red flag” laws. McConaughey made these demands with the fierce opinion that he wants “gun laws that won’t make it so easy for the bad guys to get the damn guns.”

Piers Morgan, a British journalist, and media figure, is usually known for his controversial and strong opinions. This time around, he had the majority of people siding with his New York Post article responding to McConaughey’s White House speech. He admitted that, like many others, McConaughey’s words evoked tears and raw emotion. He even went as far as to say, “There’s never been a more powerful or gut-wrenching moment in the White House briefing room.”

While McConaughey’s cry for gun control in the midst of a national crisis had the deepest impact, many other celebrities weighed in on the issue. Another Texan star, Selena Gomez, posted a thread on Twitter expressing her concern for the situation: “Today in my home state of Texas 18 innocent students were killed while simply trying to get an education. A teacher killed doing her job. If children aren’t safe at school where are they safe?”

She then followed up by expressing, like McConaughey, that those in power need to change the laws in order to prevent these mass shootings from continuing to occur at an alarming rate. Gomez also used her enormous online platform to share a resource where people can get involved and donate.

The Kardashian family also spoke out about the shooting, and gun violence in general. Kris Jenner expressed how the tragedy broke her heart, saying, “No words can make this better. There is much that needs to change. Law makers – Please stop failing our children.” Kim, Kourtney, and Kylie also used their social media platforms to bring awareness to the issue of mass shootings in America, but it was Khloe’s statement that made the most impact. “It was ‘enough’ ten mass shootings ago. It was ‘enough’ after Sandy Hook,” Khloé’s Instagram story read, “What good is our freedoms when there is no protection of our lives?”.

Many athletes such as Golden State Warriors head coach, Steve Kerr, as well as famous NBA players Steph Curry and Lebron James, made statements in light of the Uvalde mass shooting. In fact, Kerr’s speech was shared extensively online, warranting a response from Taylor Swift who said that “Steve’s words ring so true and cut so deep”.

How Can Celebrities and Social Media Invoke Change?

Social media can be an amazing tool for sparking change. Not only do we have access to global networking and connections at our fingertips, but we have the opportunity to reach new audiences. As individuals, we can use our smaller platforms to change the communities around us. On a much greater scale, celebrities have the reach to change the world.

RELATED: 5 Daily Habits to Steal from Matthew McConaughey, Including His Penchant for Mixing Work and Pleasure

This might seem like an overly optimistic statement to make, but optimism in times of hardship might just be what we need. Many of our favorite celebrities have hundreds of millions of followers. Think about the impact that one statement from someone so influential can make. Not only do they have the resources to make a difference in the form of donations, but by simply sharing resources and bringing awareness to what’s going on in the world, they can inspire change.

The domino effect is the idea that change can start with one person and become a chain reaction. This is the power that celebrities hold, and we have seen it work this way in the past. From McConaughey’s meaningful speech to the plethora of Tweets and Instagram posts, we can already see that society is responding in a powerful way.

The Uvalde mass shooting is not a political issue; it’s an issue of humanity. In the words of McConaughey himself, “Regulations are not a step back; they’re a step forward for a civil society and — and the Second Amendment.”