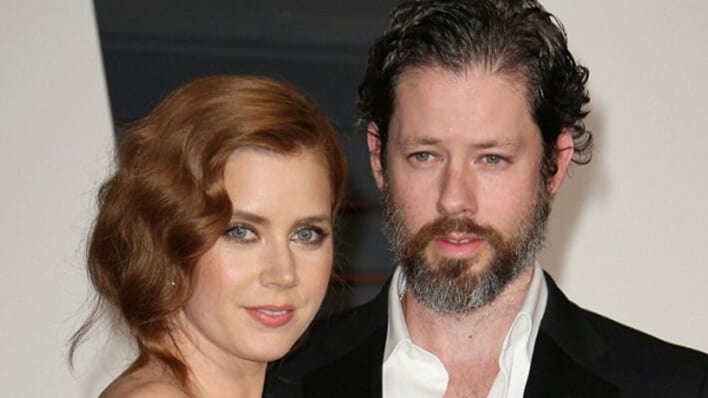 Together since 2002, engaged in 2008 and married in 2015, Amy Adams and husband Darren Le Gallo met in acting class in 2001. And they’ve been building a family and looking good ever since!

Hollywood star Amy Adams actually met future husband Darren Le Gallo when the two of them took acting classes. Adams had enrolled prior to one of her early film roles, Steven Spielberg‘s crime adventure Catch Me If You Can. She and Le Gallo became fast friends, and often did scene work together. However, it took a year or so before that friendship to evolve into something more.

“I had another boyfriend, and Darren was dating some girl — I did scenes with him, and I liked him and thought he was really sweet,” Adams recalled.

It wasn’t until one weekend later on that Adams and Le Gallo acted together in short film, directed by their acting coach, and they really got to know each other on a considerably more personal level.

“I just found him to be such a genuine, caring person. And assertive! He demanded that we go out on a date,” Adams remembered. “He said, ‘I know you’re getting over this [other] guy, but I’m taking you out on Wednesday.’ I think that was it exactly. And I was like, ‘And so you are!’”

Just as their relationship was taking root, Adams’ career began to seriously accelerate. Over the course of the next 10 years, she began appearing in one acclaimed movie after another, including Junebug, Enchanted, Charlie Wilson’s War, Sunshine Cleaning, Miss Pettigrew Lives for a Day, Doubt, Julia & Julia and The Fighter.

In the midst of all that work, Adams and Le Gallo found the time to fall in love, get engaged, and then, in May 2010, have a daughter, Aviana Olea Le Gallo. The couple were married in 2015 with 5-year-old Aviana serving as a flower girl.

Adams garnered the first three of her six of Academy Award nominations over the course of those first 10 years with Le Gallo. In fact, it was at the 2006 Academy Awards ceremony, where she was nominated for Best Supporting Actress for Junebug, that the couple made their first public appearance together. For her part, Aviana made her first appearances in public at age of 7, when Adams received a star on the Hollywood Walk of Fame in 2017.

Adams and Le Gallo’s Daughter was Born in 2010

Over the years, Le Gallo occasionally popped up in small roles on TV shows like First Monday, Then We Got Help and HBO’s Six Feet Under, and in films such as Date Night and The Master. He was also engaged in other visual arts, having received his bachelor’s degree in painting from Abilene Christian University in Texas. Amy Adams’ husband posts many pictures of his “dream-like paintings” on his Instagram page, alongside adorable photos of the family.

By and large, Le Gallo has retired from acting, and the past decade has seen him truly shine in supporting his wife and her busy schedule as an A-list film actress.

“He has sacrificed a lot. But he travels with me and helps to keep the family together, and I really do appreciate that,” Adams said in a 2016 interview. “But I don’t value it because he’s a man doing it, I value it because he’s my partner. My husband is an extremely competent caregiver.”

Adams has only praise for her husband’s seemingly selfless actions in regards to his seeming sacrifice of his own acting career in support of hers and taking on the majority of the day-to-day parenting duties for their daughter.

De Gallo Travels with Adams and ‘Keeps the Family Together’

“I know he’s completely capable and lovely, and beautiful, and offers something I could never hope to offer just in the nature of his being,” the star of The Master, American Hustle, and Arrival insists.

“It’s sexy to see him raising a girl and teaching her how a man should treat her in a lovely way,” she said.

Now it looks like Adams and Le Gallo may be entering a slightly different phase as Le Gallo has written and directed the upcoming family “dramedy” Sam & Kate, scheduled to open theatrically in November.

Starring heavyweights Dustin Hoffman, Sissy Spacek and Henry Thomas, the early buzz on the film is strong, And we’ve got to assume that Le Gallo has some serious talent when it comes to writing, directing and selling himself — enough to attract such seriously big names as Hoffman and Spacek for his debut film as a writer/director.

Adams and Le Gallo Have Big Movie Openings This Season

A couple of weeks after the limited theatrical release of Sam & Kate comes the worldwide rollout of Amy Adams’ big new holiday film, the highly anticipated Disney family adventure Disenchanted. A sequel to the 2007 hit Enchanted, one of Amy’s biggest box-office smashes, Disenchanted follows the story of Amy’s princess, Giselle, at a point when she has lived “happily ever after” for 10 years, and she finds herself questioning her happiness in what is seemingly a perfect, fairy tale life.

RELATED: Who Is Chris Evans’ Girlfriend, and What Does His Love Life Say About Dating?

Shifting our focus back to reality, it looks like her real life is playing out like that kind of fairy tale one might find in the movies, while her husband’s reality is entering its own fantastical period with his upcoming feature film directorial debut.

Fantasy or reality, from the looks of it, it appears that Amy Adams couldn’t be more content.

“Once you have a great man in your life, it allows you – at least for me – to look at yourself and grow as an individual,” she says. “If I had known I was going to find this, my early 20s would have been completely different.”