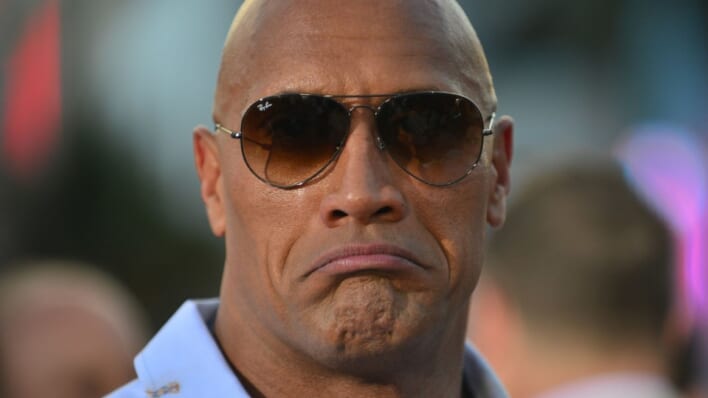 The “Devil Wears Prada” beauty and action superstar developed a delightful friendship on “Jungle Cruise” and their playful teasing continues to keep it real.
By Laurence Lerman    October 16, 2022

The “Devil Wears Prada” beauty and action superstar developed a delightful friendship on “Jungle Cruise” and their playful teasing continues to keep it real.

Actress Emily Blunt can hold her own when it comes to taking on the usually formidable Dwayne “The Rock” Johnson.

That was quite apparent when the pair hit the publicity trail to promote their 2021 laugh-filled action-adventure film Jungle Cruise, which was inspired by Walt Disney’s famed theme park attraction of the same name.

One very memorable exchange happened between the two during an on-camera interview that found Blunt and The Rock playfully snipping at each other when they were asked by one journalist if they had to develop any particular skills from scratch for the making of the film. At that point, a smiling Ms. Blunt pointed at the unsuspecting Mr. Johnson and deadpanned, “Acting.”

Emily Blunt & The Rock Shared Many Laughs on Jungle Cruise

And with that, the 260-pound professional wrestler-turned-Hollywood superstar began laughing uncontrollably.

Many more jokes and jibes unfurled during their promotional tour, so many in fact that The Rock put a bunch of them together into a reel and posted it on his @therock Instagram page, captioning the montage with the comment, “Here’s the gospel ~ I have never EVER worked with any other costar in my life who makes me laugh harder than this one.”

Emily Blunt and Dwayne Johnson didn’t meet prior to starring in Jungle Cruise together, but clearly they hit it off famously. As evidenced by both their on-screen chemistry and in the charm and comfort they exhibited while publicizing the film, they became fast friends over the course of the film’s production.

The word was that it took a whole lot of cajoling by The Rock—who also served as one of Jungle Book’s producers—to convince Emily Blunt to co-star opposite him in the movie. For her part, Blunt wasn’t initially interested in the project when plans for its production were being laid out as she was enjoying a short break after filming her well-received movies Mary Poppins Returns and A Quiet Place back-to-back. This, after The Rock left her a slew of messages and videos in an attempt to convince her to sign on for the film!

Johnson’s persistence, humor and bright attitude went a long way in chipping away at the London-born actress’s seemingly Teflon exterior (boosted by an enthusiastic plea from the film’s director Jaume Collet-Serra). It took a little while, but Blunt finally decided to join the muscle-bound leading man for the colorful cinematic cruise.

Emily Blunt Was Initially Reluctant to Embark on Jungle Cruise

Dwayne Johnson’s success at the international box office speaks for itself, but that face is not all of his big-budget, big-action extravaganzas can be winners—that’s something any cinematic superstar will tell you. And the best laid plans for any large-scale, “can’t lose” production can be derailed a host of reasons, be it a controversy, a change in public tastes, a political upheaval or a pandemic.

Or, sometimes, it’s as easy as the movie simply not being all that great.

Not that Jungle Cruise was awful, but it didn’t light the critics on fire, scoring a so-so 62% Fresh rating at reviews aggregator Rotten Tomatoes and only a slightly more enthusiastic rating of 6.6 at IMDb. Notably, most of the positive notices make mention of lively on-screen back-and-forth between the two stars, with the UK’s The Times declaring that, “Johnson and Blunt make the most unexpectedly appealing screen couple of the year.”

That chemistry was apparently the only combustible element to be found in Jungle Cruise when it was released in the July of 2021, ultimately ringing up a worldwide total of $221 million. With an estimated combined production and promotional cost of $362 million, Jungle Cruise needed to gross approximately $500 million worldwide in order to break-even, meaning that the film lost more than $151 million at the box office.

The Fun Continued for Both on the Promotional Tour

Though it was released at a time when Covid and its variants were stifling people from going to the theaters, one would think that a family-friendly action-adventure vehicle starring The Rock and the always-pleasing Emily Blunt would have elevated the theatrical possibilities and not landed with a thud.

Then again, it’s availability on streaming platform Disney+ and subsequent release on Blu-ray and DVD helped to inch it closer to profitability—and to the possibility of Blunt and Johnson returning for a sequel!

RELATED: The Rock Walks His Cousin Into a House With Her Eyes Closed – What Happens Next Brings Her to Tears

News of a sequel to Jungle Cruise was officially confirmed only one month after the film’s premiere in theaters and on Disney Plus, with co-producer Hiram Garcia hinting that the second Jungle Cruise would be even more sprawling than its predecessor.

“I think one thing fans can expect is our heroes covering more territory. Our first movie mainly went between London and the Amazon, but for this next adventure we have much bigger plans,’ he said.

In the meantime, The Rock and director Collet-Serra recently teamed up again for the upcoming DC Comics movie Black Adam starring Johnson, while Ms. Blunt just wrapped the upcoming Amazon Prime The English is currently shooting the crime drama Pain Hustlers. The stars of Jungle Cruise are both busy, indeed, but one imagines they’d up for one more cruise through the jungle, now that they know they can work and play so well together.

A Jungle Cruise Sequel for Emily Blunt and The Rock?

Whether there’s a sequel of not, it’s simply nice to see a pair of high-profile actors like Johnson and Blunt grow close during a project to the point where a genuine friendship develops, one where they can work with each other, respect each other, and needle each other with affection. (How else to describe her referring to him as “toots” and “cupcake” during the shoot!?)

That audiences and critics most enjoyed the byplay and relationship that developed between Blunt and Johnson, and that they took that feeling with them out on the promotional road tells us a lot about the strength and positivity that comes with a genuine friendship. And that you should never take yourself too seriously, particularly in Hollywood where all eyes are on you.

And if you’re keeping it real when the movie that brought you together isn’t considered to be one of the great ones, well, to that we can only say, “Bravo!”