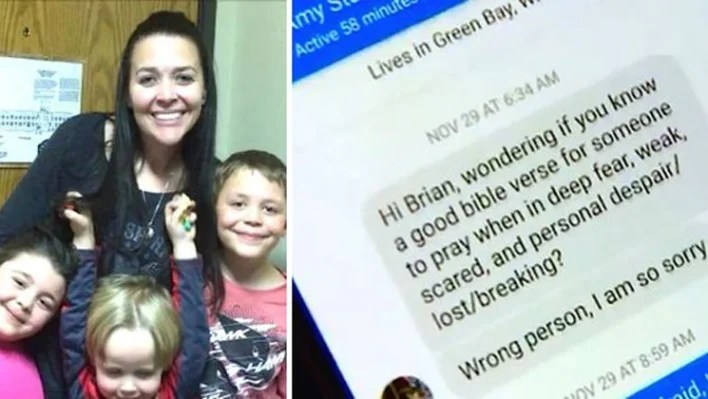 Amy Rickel had no way of knowing her mistaken message would lead to a holiday miracle.
By Amber Dowling    December 26, 2022

Amy Rickel had no way of knowing her mistaken message would lead to a holiday miracle.

Sometimes help comes when you need it most, but from a place you expect it least. That was one mother’s experience over the holidays in 2016 after she accidentally sent a Facebook message to a stranger, resulting in a life-changing miracle for her and her three children.

You see, back then, Amy Rickel had just moved her three small children from Michigan to Green Bay, Wisconsin, so they could be closer to their father. But then her luck ran out. She lost her job, her car broke down, and all of the shelters that accepted children had long wait lists.

She had no idea how she would pay for the cheap motel she’d rented out for her family, let alone keep her four, six, and eight-year-old “safe and warm,” as per a WPXI report.

So she reached out to a friend on Facebook and asked for prayers to help her during her darkest time. “Hi Brian, wondering if you know a good bible verse for someone to pray when in deep fear, weak, scared, and personal despair/lost breaking?” she wrote.

Except the message she sent went to a total stranger, a mistake Rickel realized immediately. She sent a follow-up message apologizing. Then, to her surprise, the man she accidentally reached instead, Brian Van Boxtel, took the message as a calling and wanted to help.

Related: Stranger Catches Homeless Man Sleeping On His Office Porch – Instead of Kicking Him Out, He Decides to Change His Life

“He was like, ‘Nope! God puts us in people’s lives for a reason,’” Rickel recalled to the publication.

A Change of Fortunes

Van Boxtel wanted to help, and so he asked himself what Jesus would do. Rickel remembers how she was “bawling and praying” when he messaged her back, saying he was coming to pay for her motel. But that wasn’t all.

Shortly after arriving to help, Van Boxtel convinced the mother to set up a crowdsourcing page to ask for donations and help. So she did. “Any and all help will be welcomed and received with warm loving grateful hearts, and we as a family will pay it forward as soon as we are able,” she wrote.

“Thank you all in advance for even considering helping my family out, you may never know how much it will mean to me, but know that it will be everything this time of year knowing they are all warm and safe!”

Help arrived almost immediately. A woman named Kathy Schumann offered the family use of her minivan. But she, too, wanted to do more.

“She really tugged at our heartstrings,” Schumann told WPXI. “And we just felt like this holiday season we couldn’t let the kids be out in the cold and we cleared out a room and brought them home.”

A man named Chad Morack also found out that Rickel was a licensed practical nurse, and he put her in touch with a medical recruiting office. A senior recruiter worked hard to find her a full-time job for the new year.

Related: Woman Agrees to Buy a Stranger Lunch Despite Her Own Financial Struggle – Then She Breaks Down in Tears

“[I’m] pretty amazed,” Rickel said. “I still kind of find it unbelievable… It’s totally restored my faith in more than just humanity, my faith in God.”

As for Van Boxtel, he says he was where he was meant to be that day when Rickel reached out. “I know that God had me in the right place at the right time and so I listened to my heart,” he added.

Listening to The Universe

This story just shows you that sometimes things happen for a reason, and even if you don’t understand that reason at the time, listening to your instinct or inner voice can lead to some pretty incredible things.

Van Boxtel could have ignored Rickel’s message that day and gone about his life. And who knows where Rickel and her children would have ended up. But by asking questions and following his instincts, he helped an entire family change their lives.

It’s a subtle reminder that we all have the power to make a difference. You don’t have to pay for an entire motel room stay or give someone your minivan, but doing something small and within your power to help another person who is down on their luck can be the thing that turns them around.

So if your gut is telling you to make that small donation at checkout, donate some old clothes to a friend or shelter, or even volunteer your time driving someone around or reading over their resume, just do it. Odds are you’ll never regret it.

KEEP READING: Dad Realizes He Can’t Afford an Expensive Plane Ticket for His Toddler – So a Stranger Buys It for Him and Quietly Slips Away