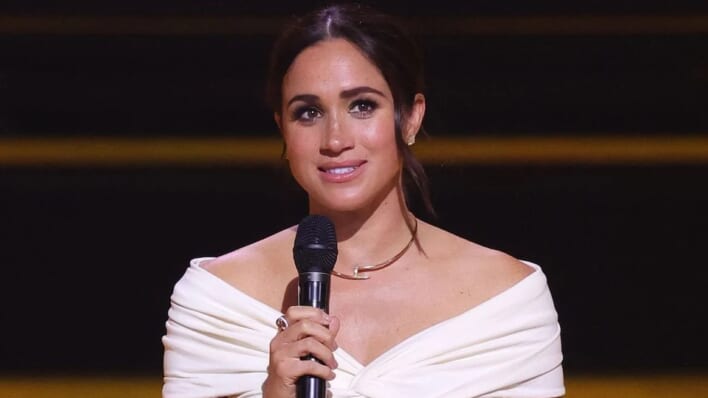 Meghan Markle’s podcast “Archetypes” has been fighting Joe Rogan for first place on the Spotify charts since its release. Other than well-known guests, most fans tune in to hear Markle’s experiences with the royal family. So, what exactly did Markle have to say about her – now distant – royal relatives and how did it shift her sense of self?
By Bianca Mercuri    September 10, 2022

Meghan Markle’s podcast “Archetypes” has been fighting Joe Rogan for first place on the Spotify charts since its release. Other than well-known guests, most fans tune in to hear Markle’s experiences with the royal family. So, what exactly did Markle have to say about her – now distant – royal relatives and how did it shift her sense of self?

Meghan Markle, the Duchess of Sussex, released her podcast “Archetypes” on August 232022. It skyrocketed to the top of the charts, even beating out Joe Rogan at the time. Her first featured guest was Serena Williams, who recently announced she plans to retire from pro tennis. Since then, she’s had other memorable guests such as Mariah Carey and Mindy Kaling.

RELATED: Meghan Markle Is Worth Admiring — but Not Because of Royalty

But, the most memorable conversations from the podcast were about Markle herself. Markle has infamously removed herself from the same life as her royal relatives, living peacefully out of the spotlight. However, she certainly had some interesting things to say about how being a part of the royal family affected her sense of self.

Let’s get into what was said in “Archetypes”, and what kind of insight it gives us into the royal family dynamic.

Before diving into what Markle has said in “Archetypes”, it’s important to define what the podcast is supposed to uncover in the first place and why she chose that title. “This is Archetypes – the podcast where we dissect, explore, and subvert the labels that try to hold women back,” Markle said in the teaser, “I’ll have conversations with women who know all too well how these typecasts shape our narratives. And I’ll talk to historians to understand how we even got here in the first place.”

In the opening episode of the podcast, Markle was not holding back. Serena Williams and Markle have an already established friendship, which contributed to the candidness of the interview. She and Williams talked about knowing when to call it quits, which was interesting as Markle alluded to her exit from the royal spotlight in 2020. “I think both of us, of the three of us,” she said talking about herself, Williams, and her husband Harry, “really know that sometimes the right decision isn’t the easiest decision.”

RELATED: Serena Williams Get Real About Mental Health, Inspires Us to Let Go of the Pressure to Be Perfect

Markle also spoke about how she learned ambition and feminist ideals from the all-girls Catholic school she attended in her childhood. She felt this empowered feeling of being a woman was a focal point in her life and that she actively felt working… until she met Prince Harry.

“So, I don’t remember ever personally feeling the negative connotation behind the word ‘ambitious’ until I started dating my now-husband,” She said, “Apparently ambition is a terrible, terrible thing, for a woman that is – according to some. So, since I’ve felt the negativity behind it, it’s really hard to un-feel it.”

What Meghan Markle and Mariah Carey Discussed About Race and Royalty

Mariah Carey was the second featured guest on “Archetypes”. Even though Carey is a pop culture icon, the podcast explored some more complex themes such as what it’s like to be biracial. Carey opened up about she felt she “didn’t fit in” in her childhood due to constantly moving around.

Markle made a point to say that they both felt it was difficult to fit in because they’re “light-skinned”. She also brought this particular theme back to her relationship with Prince Harry. “I mean, if there’s any time in my life that it’s been more focused on my race, it’s only once I started dating my husband,” Markle said, “Then I started to understand what it was like to be treated like a Black woman. Because up until then, I had been treated like a mixed woman. And things really shifted.”

RELATED: Why Mariah Carey Will Never Forget Her Encounter With Princess Diana Before Her Tragic Death

We can see that her media coverage throughout her relationship with Harry as well as her entrance into the royal family did skew her perception of self and she had always seen herself. As she said, she always thought that ambition was a positive attribute, but that quickly became a point of contention which made her re-evaluate the values instilled in her as a young girl.

Furthermore, her experience being biracial was completely overlooked as she was labeled a black woman in the media which did not necessarily resonate with her. These are two very important identities that were questioned by the public, which can be detrimental to the way that Markle saw herself during that time.

With the recent death of Queen Elizabeth II, Markle and Prince Harry’s royal duties may increase for the time being. It’s expected that the couple put aside their qualms to grieve and heal together. That being said, this tragic time for the royal family does not erase why Markle and Prince Harry distanced themselves in the first place.

From Markle’s podcast revelations, it’s arguable that her time being associated with the royals did her more harm than good. It’s a rare occasion that someone chooses to remove themselves from the royal family. Coincidentally, Markle is reminiscent of Princess Diana and what she stood for. Besides the intense media scrutiny that both received, it’s actually the acts of giving back that connect the two closely. Princess Diana might have briefly been a royal, but her purpose was to use that opportunity for charity work and to give back to communities in need. Markle seems to be following a similar path.

With more fantastic guest features planned for “Archetypes”, her listeners are excited to hear more about Markle’s personal life as well as explore the trajectory of this podcast. Markle’s formula for a successful podcast has proven itself as it continues to dominate Spotify, holding onto its popularity.

Whether you’re a dedicated fan or a curious listener, Markle’s “Archetypes” is sure to make you think. Leave your hang-ups by the door, and stay a while, you’re sure to come out with a fresh perspective.