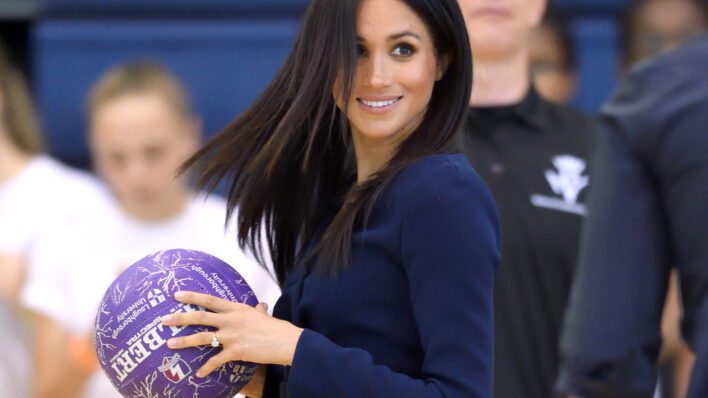 The birth of Meghan Markle and Prince Harry‘s first child has come and gone, as has the first anniversary of
By Aly Walansky    April 29, 2019

The birth of Meghan Markle and Prince Harry‘s first child has come and gone, as has the first anniversary of the royal wedding, and the announcement that Meghan and Harry are moving away from royal life. Consequentially, the world’s interest in the former actress known as Meghan Markle is at a fever pitch.

We all can’t get enough of the American actress turned British royal, but what is it about Meghan that has us all so obsessed? Are we just all fantasizing about escaping the doldrums of our lives by falling in love and joining the royal family? At some level, this is what psychologists call projective fantasy.

“If she could become a ‘princess’ then so could I.”

“People project their own unconscious (and conscious, though less so) fantasies onto those in the public eye (celebrities and certainly royals),” says Neil Schierholz, PsyD, a licensed psychologist.

To many, Meghan Markle is the modern-day Grace Kelly: an American-born actress whisked away to a foreign land by a prince to become his bride. Many little girls are taught to fantasize about exactly that.

We may covet this version of reality in our dreams, but they are just that: dreams. We don’t actually know these people, though we can interact with them in our fantasies as if we do. Dr. Schierholz says we “manipulate them in our minds according to our own wishes, dreams, and desires without fear of retribution (after all, they don’t know what we are thinking, right?).”

Royals allow us a safe place to put our fantasies and to live them out, experiencing the good feelings that we may not otherwise get in reality.

“In essence this allows us to ‘play with our dolls’ as adults, in our minds, without appearing childish and subject to ridicule, especially if others are engaged in the same,” says Dr. Schierholz.

But Meghan Markle is so much more than a royal princess for so many of us. At the surface level, yes, many people follow Meghan and the royals as a form of escapism and indulgence in the princess fantasy, but at a deeper level:

“It’s more about the ideas this bi-racial woman represents and how she’s bringing them to the forefront of a very old institution and helping to modernize it,” says Erika Martinez, Psy.D., CDWF, a licensed psychologist and founder of Miami Shrinks.

Meghan Markle is a woman of mixed race, divorced, and an actress – all factors that 50 years ago would have kept her out of the British royal family, and yet, today, she’s using her to status to change the game.

She’s also showed us how her grace extends to her personal trials in the public eye. “Personally, I very much admire her grace and fortitude as she’s coped with her father and paternal half-siblings’ behavior in the press,” says Dr. Martinez.

Meghan Markle has been an amazing woman who did incredible things for the world for years now. As an accomplished actress, she had a starring role in a hit TV for seven years. She was making waves with her humanitarian efforts through charity, women’s rights and equality, and animal rescue before she even met Prince Harry.

All of that is much more worthy of admiration than the way her life changed because of who she married.

Still, many of us also still want to be a princess in gowns and tiaras who gets married to a prince. We admit it. Is it escapism, then? Yes, but so are so many, many activities in life.

“Ritual and fantasy, the great spiritual teachers and indigenous peoples knew and know, are pathways to altered states, other realms, and healing,” says  Dr. Schierholz.

If we can channel our fascination with the Duchess of Sussex into a focus on Meghan Markle‘s successful career and humanitarian efforts, then it’s fantasy time well-spent.