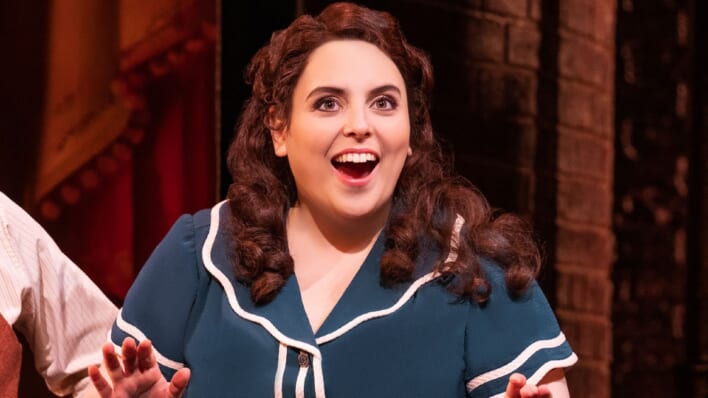 Beanie Feldstein’s Powerful Response After Being Fired from Funny Girl

Her headlining Broadway debut may not have gone as planned, but Beanie Feldstein still has plenty to smile about
By Laurence Lerman    August 3, 2022

Her headlining Broadway debut may not have gone as planned, but Beanie Feldstein still has plenty to smile about

Over the past decade, actress Beanie Feldstein has built up an exceptional resume of film and television work, which includes her portrayal of Monica Lewinsky in the FX anthology series Impeachment: American Crime Story and the films Lady Bird, The Female Brain, The Humans and Booksmart. For her performance in the latter, Feldstein earned a Golden Globe nomination for Best Actress-Motion Picture Comedy or Musical.

RELATED: 5 Effective, Professional Ways to Express Gratitude in the Workplace

With her final performance as Fanny Price in Funny Girl on Broadway, the biggest celebs came out to applaud the actress. Even former co-star and American Horror Story actress, Sarah Paulson had this to say, “She was a THRILLING, wildly moving Fanny. That’s just the f–ing truth.”

Beanie Stars in the Broadway Revival of Funny Girl

This year, the 29-year-old Feldstein achieved what can be considered a career high by any measure: starring as legendary theatrical performer Fanny Brice in the first-ever Broadway revival of the landmark musical Funny Girl. The show first opened on Broadway in 1964 starring Barbra Streisand in a star-making performance that garnered her a Tony Award nomination, one of eight garnered by the show.

Unfortunately, there’s been a lot of raining on Beanie Feldstein’s parade since the Funny Girl’s opening on April 24.

Feldstein’s portrayal of Brice in Funny Girl immediately received stinging or, at best, tepid notices from the critics—one article even referred to her as “Beanie Flopstein.” Weeks later, the actress tested positive for Covid-19 and missed a string of the show’s performances, severely hampering any positive momentum the production may have been gaining.

In mid-June, both Feldstein and the Twitter page for Funny Girl announced that Feldstein would be leaving the show in late September, four months into what was reportedly a year-long contract.

“September 25th will be my last show as Fanny Brice in Funny Girl. I’ll never be able to find the words that could even begin to explain what the experience has been to me,” Feldstein posted.

Beanie Announces her Early Departure from the Show

Two weeks later, it was reported on Gawker that actress Lea Michele had committed to taking over the role of Brice come September.

Michele, one of the stars of the original Broadway production of Spring Awakening and the hit musical TV show Glee, has long let it be known she has been interested in the Funny Girl leading role. Fittingly, she even sang a pair of songs from Funny Girl’s renowned score in episodes from Glee’s first two seasons.

According to sources, the article on Michele—which also referenced the show’s unenthusiastic reviews and declining ticket sales—made Feldstein “very upset” by implying that was she was “basically fired” from the show.

A couple of weeks after that, on July 11, Feldstein announced via Instagram that she would be leaving Funny Girl much earlier than expected.

“Playing Fanny Brice on Broadway has been a lifelong dream of mine, and doing so for the last few months has been a great joy and true honor. Once the production decided to take the show in a different direction, I made the extremely difficult decision to step away sooner than anticipated,” Feldstein stated in the post.

Acknowledging the show’s cast and crew, Feldstein ended her post by stating, “I hope you continue to join them on Henry Street after I depart on July 31st.”

The Rumor that Lea Michele is Replacing Beanie is Confirmed

The next day, the Funny Girl production officially announced on its social media pages that Lea Michele would be replacing Feldstein as Fanny Brice beginning on September 6. Feldstein’s understudy Julie Benko will play the role from the beginning of August until Michele’s arrival.

And that’s exactly what happened: Feldstein’s final performance was on Sunday, July 31, and Benko assumes the role on Tuesday, August 2, through Michele’s arrival in early September.

RELATED: 5 Common Reasons People Get Fired and How to Easily Avoid Them

Gossip, rumors, and innuendo have long whirled about the Broadway community and its coverage in the press. In the case of Funny Girl, it has been virtually non-stop since Feldstein’s casting in August 2021, as has the coverage on social media outlets. Her abrupt public announcement of her early departure from Funny Girl, though rumored to be a move that “blindsided” the show’s producers, appears to have been the conscientious decision of a levelheaded professional keenly aware of her own accomplishments, direction and sense of responsibility.

Feldstein has openly discussed how when she was just starting out as a performer, she had to overcome pressure to meet show business and society’s beauty standards and her sexuality to become a star on her own terms. The realization in her late teens that, “I was not the problem; this standard is the problem,” inspired Feldstein to shift her way of thinking away from what society deems ideal and instead focus on both personal satisfaction and professional success.

Beanie and Her Longtime Girlfriend Bonnie are now Engaged

During the heights of the story’s extensive tabloid and social media coverage, Feldstein enjoyed a personal high of her own. In late June, two weeks after the first announcement of her departure from Funny Girl, she announced her engagement to her longtime girlfriend Bonnie Chance Roberts, whom she met on the set of the movie How to Build a Girl in 2018. She describes Roberts, one of the film’s producers, as “the love of my life.”

Friends and family were on hand to celebrate the news and Feldstein shared pics from the proposal on Instagram, writing in the caption of the post, “i do, bon.”

​​“Bon was the best thing that’s ever happened to me,” she told Vogue in a profile earlier this year.

RELATED: Why Keira Knightley and James Righton’s Marriage Teaches Us The Value of a True Partnership

One of Feldstein’s current projects is a starring role in another well-known musical endeavor—a film version of the storied 1981 musical Merrily We Roll Along, featuring a score by Stephen Sondheim. Beginning at the end of the story and traveling backward in time for 20 years to the start, it tells the story of three friends—Frank, Charlie, and Mary—who begin their careers in show business together. Merrily is being directed by Richard Linklater who will film it over the next two decades to recreate the amount of time the musical covers. (Linklater famously filmed his award-winning movie Boyhood over the course of 12 years.)

Like Funny Girl, Merrily We Roll Along follows the lives and careers of people involved in entertainment, and the success, failure, love and friendship they encounter. It is a fictional tale, yes, but one with which Feldstein was undoubtedly feeling quite familiar as she approached the final night of her first starring role on Broadway. And though Funny Girl didn’t reach the commercial and critical peak that its producers projected, Feldstein’s positivity and the excitement she’s generating both personally and professionally deserve a standing ovation.

The actress gave her final performance as Fanny Brice on Sunday and in an Instagram post following the show, she warmly bade Broadway farewell (for now) with lyrics from Joni Mitchell’s classic 1966 song “Both Sides Now:”

“But now it’s just another show; and you leave ’em laughing when you go,” she posted.

RELATED: What Drove Cameron Diaz To Quit Hollywood Once And For All?

Feldstein’s simple but expressive online farewell is a worthy example of how one should approach life’s professional and personal endeavors. No career venture, no matter how vital or high-profile (which is how they tend to be in show business) should ever disrupt the equally essential goal of personal happiness and satisfaction.

Work projects will fade into yesterday, while life and love exist for today—and tomorrow. Just as Joni sang and Beanie echoed, it’s just another show…

Charlize Theron Vs. Tom Hardy and the Importance of Asserting Agency in the Workplace