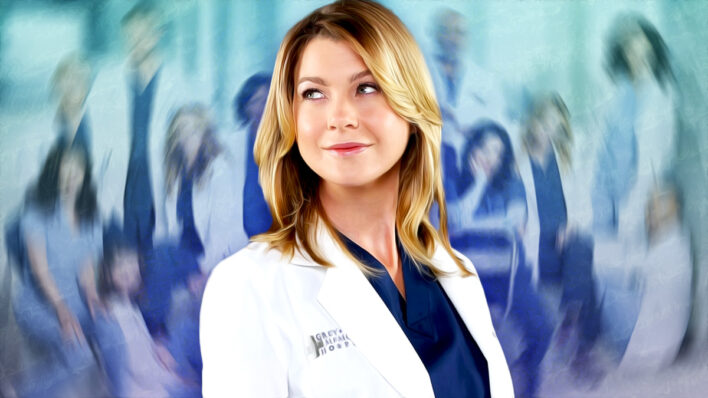 Ellen Pompeo’s longterm commitment to Grey’s Anatomy is both practical and visionary. And she has zero regrets. Here’s why.
By Maya Khamala    May 4, 2022

Ellen Pompeo’s longterm commitment to Grey’s Anatomy is both practical and visionary. And she has zero regrets. Here’s why.

For devoted fans, Grey’s Anatomy, which is currently in its 18th season, is truly the gift that keeps on giving. Having premiered all the way back in 2005, Shonda Rhimes’ hit medical drama is the longest-running primetime medical drama in television history. Perhaps in part because it sparked a revolutionary moment for inclusivity on television, Grey’s remains ABC’s top-rated show, even after all these years.

It’s still going strong, too: ABC has yet again renewed the show for what will be its 19th season, with star Ellen Pompeo set to return as Meredith Grey, a role she’s been playing since the very beginning.

RELATED: What Kate Pearson from “This Is Us” Can Teach us About Self-Actualization

Although Grey’s has seen many of its most beloved characters leave the show in heartbreaking and tragic ways over the years, the 52-year-old mother of three was just 33 when she first tried Meredith Grey on for size. And she’s stuck with it ever since.

Following a tough childhood where she and her siblings were raised by her father and grandparents after her mother died of an overdose, Pompeo made her way to Hollywood. Her breakout role in the 2002 film Moonlight Mile sparked interest from major filmmakers, yet by 2004, her career had stalled. That’s when her agent brought her the script for Grey’s Anatomy.

Her response at the time: “I’m not going to be stuck on a medical show for five years. Are you out of your f!@#%^& mind? I’m an actress.” He convinced her to audition anyway, if only to pay the rent.

And the rest, as they say, is history.

Why Ellen Pompeo Chose to Stay on Grey’s Anatomy

Pompeo’s commitment to remaining on the show for 17 years and counting has been the topic of much discussion.

The award-winning actress has scarcely appeared onscreen in anything other than Grey’s since she first started working on the show. So naturally, people want to know why a true talent with everything going for her would choose to remain so steadfastly tethered to one show throughout her career while fellow cast members like Sandra Oh chose to leave in order to pursue other creative avenues in their careers.

But it’s not like Pompeo never thought about leaving. On the contrary, she has opened up about how, for the first 10 years or so, the environment on set was more or less toxic, almost leading her to call it quits.

“I talk to a lot of girls who are on network shows, and they have the same culture problems that we had,” Pompeo shared. “On the outside, we were a massive success, but there was all of this tumult on the inside: It was a lot of rivalry, a lot of competition. It starts with actors behaving badly, and then producers enabling them to behave badly. And, by the way, I’m guilty of it, too. I saw squeaky wheels getting all the f!@#%&^ grease, so I was like, ‘OK, that’s how you do it,’ and I behaved badly as well. I mimicked what I saw. I’m not perfect.”

Along these lines, it seems likely that Derek Shepherd, Meredith Grey’s long-term love interest, was written off the show because of actor Patrick Dempsey’s toxic behavior on set. For her part, Pompeo didn’t like how Dempsey was always complaining about working long hours when she “had twice as many scenes” in the same episode.

Ultimately, Pompeo’s decision to stay on Grey’s Anatomy was simple. It was motivated by the desire to provide for her family.

“Once I started having kids,” she said, “It became no longer about me. I need to provide for my family… I made a decision to make money, and not chase creative acting roles. I don’t like chasing anything ever, and acting to me, in my experience, was a lot of chasing.”

But just because she chose to sacrifice a certain aspect of her creative life for the sake of her family — while withstanding a toxic work environment, no less — doesn’t mean she wasn’t determined to create a series she could be proud of.

Ellen Pompeo Fought for What She Deserved on Grey’s Anatomy

It turned out that creating a series she could be proud of was inextricably linked with Pompeo gaining more agency—both in deciding the direction of the show and in changing the dynamic on set. The turning point was sometime around 2015, the year Dempsey left.

In a 2018 interview, she opened up about how she came into her power more — both on the show, and in life.

“For me, Patrick leaving the show was a defining moment, deal-wise. They could always use him as leverage against me — ‘We don’t need you; we have Patrick’ — which they did for years. I don’t know if they also did that to him, because he and I never discussed our deals. There were many times where I reached out about joining together to negotiate, but he was never interested in that. At one point, I asked for $5,000 more than him just on principle, because the show is Grey’s Anatomy and I’m Meredith Grey. They wouldn’t give it to me… I’m sure I felt what a lot of these other actresses feel: Why should I walk away from a great part because of a guy?”

RELATED: How Ellen Pompeo Fought for What She Deserves on Grey’s Anatomy

Ultimately, however, Pompeo got her ask and then some. It turned out she had plenty of leverage, since Grey’s had been drawing nearly 12 million viewers, even after 300+ episodes. In 2018, she became one of the highest-paid actors on TV, making nearly $20 million a year. She was also promoted to the rank of producer.

While most actors tend to hate discussing their paychecks with media, Pompeo has been purposely vocal about her experience in the hope of empowering other women in Hollywood to advocate for themselves.

Having a family and more responsibilities in life not only influenced Pompeo to embrace her current job, it also led her to embrace the fact that, because of it, her fans will always know her as Dr. Meredith Grey. In this way, she has nurtured strong bonds with both her onscreen and offscreen families over the years. And, for Pompeo, there’s a wellspring of self-agency to be found there.

“At my age and where my life is, I just try to lean into it,” she says. “I’m not trying to run away from anything. It is who I am. I made my choices and I’m cool with it.”