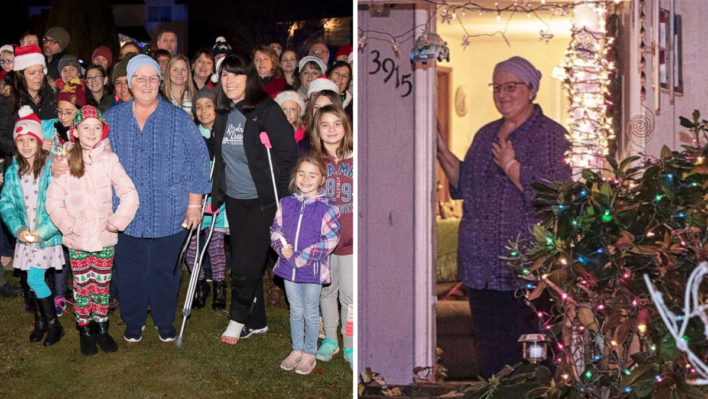 The teacher’s battle with cancer was getting her down when she was blessed with a holiday miracle.
By Sophie Babinski    December 23, 2022

The teacher’s battle with cancer was getting her down when she was blessed with a holiday miracle.

Cancer is one of the scariest things we deal with in life. When the battle drags on, things can get even darker.

Luckily, a teacher who was undergoing radiation after a misdiagnosis got a visit from her students that brightened her spirits and inspired the town.

The Misdiagnosis One School Teacher Received

Laurie Burpee is a second grade teacher in Vancouver, Washington. She is beloved by her students and known around her community for her kind and giving spirit. So, when Laurie was diagnosed with breast cancer, everyone who knew her was devastated and hoped for the best.

Then, after a double mastectomy, Laurie’s healthcare team realized she had been misdiagnosed. She didn’t have breast cancer as they had originally concluded — she had a rare cancer in her salivary gland that had metastasized and spread to her lungs. Laurie would have to undergo aggressive radiation to keep the cancer from spreading further.

Throughout the whole ordeal, Laurie was away from school. Both teacher and students missed each other dearly — until the holidays, when the students came up with a plan.

How Students Surprised Their Favorite Teacher

Laurie was at home taking it easy when she noticed a young child outside her house in the dark. When she looked closer, she noticed that there were actually many young children standing there, along with their parents.

Everyone was holding an electric candle, lighting up the block outside of their favorite teacher’s house. At first, Laurie was stunned.

Laurie went outside and noticed that among the students and parents were her colleagues and other school staff members. They were all wearing Santa hats and singing the beautiful carols Laurie loved so dearly. Laurie was overcome with emotion, but there was more to come.

How One Community Proved the Power of Doing Good

The police pulled up to Laurie’s house, flashing their lights. At first she had a fright and thought something was wrong, but she quickly realized that they were there for her.

The country sheriff and five police officers were there on behalf of local non-profit Kindness 911. The organization teams up with law enforcement to recognize people in the community who do good.

For Laurie, they had a special framed “citation.” The message on the citation thanked Laurie for being such an awe-inspiring person.

RELATED: Cancer Survivor Finishes Chemotherapy Treatment – What Her Husband Did Next Completely Stuns Her

“Thank you for being an example of kindness, compassion, and goodwill. Even when faced with overwhelming circumstances, you are a light[…] May this night remind you that you are never alone, and we look forward to walking with you through your metamorphosis where you will most definitely be a beautiful butterfly.”

Laurie was very touched that the whole community had come together and done such an amazing thing for her. She stayed humble, encouraging people to be kind just for the sake of being kind.

However, it is important to take a lesson from this heartwarming story: small acts of kindness every day can snowball and become big movements that can change the world. Never underestimate the power of doing good.