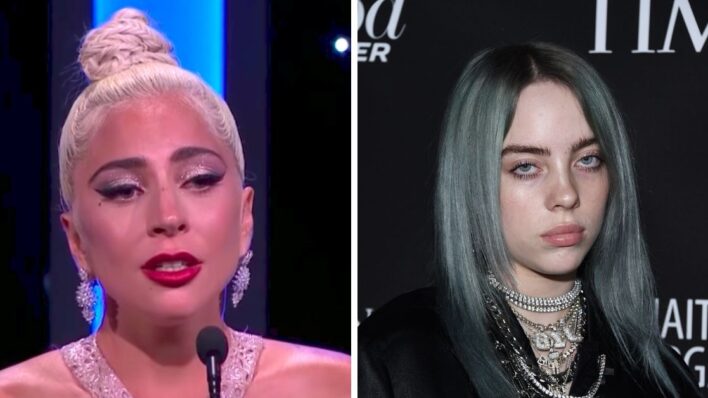 The Inspiring Reason Why Lady Gaga Reached Out To Billie Eilish

Lady Gaga reveals the powerful reason why she decided to reach out to Billie Eilish and become a mentor to the young singer.

Lady Gaga reveals the powerful reason why she decided to reach out to Billie Eilish and become a mentor to the young singer.

By now, many are aware of Lady Gaga‘s commitment to helping people. From her Born This Way Foundation committed to helping youth struggling with mental health issues to her incredible fundraising that raised $35M for COVID-19 relief efforts, her philanthropic endeavors have been a constant in her life.

Yet, Lady Gaga’s kindness is far more than just philanthropy. As she admitted to Oprah, “when I see someone in pain, I can’t look away.” Her experience with trauma at the young age of 19 changed her perspective for life.

It seems the Mother Monster has learned her lesson: sometimes, holding back from great friendships is depriving yourself–and the other–of amazing life connections. This is why she reached out to Billie Eilish, whose beginnings in the music industry mirrored her own.

Lady Gaga started out as an outcast

Gaga recently revealed in an interview with Apple Music that she wanted to be there for Billie because when she entered the industry, no one was there for her.

Billie swept a whole bunch of awards so I said, ‘Let’s send some flowers’. I wrote her a note. For me, it’s healing because it hurt me that I didn’t get that. I’m going to be that for someone else.

Let’s not forget that when Lady Gaga arrived in the industry, she created a shockwave with her eccentric appearance and commitment to expressing herself exactly how she wanted to. How can anyone forget her infamous meat dress?

Despite the constant waves of criticism she received; unfounded rumors of her being a hermaphrodite also circulated. But for Gaga, her weirdness has always been empowering. In her Netflix documentary Gaga: Five Foot Two, she openly admitted that she was not in the business of serving a male-dominated industry with her fame.

That’s not why I’m here. I’m not a receptacle for your pain. I’m not just a place for you to put it.

Additionally, Gaga also revealed that her wild outfits have a lot to do with her struggle with confidence and self-esteem issues. “If you see me dressing really out there, I tend to be self-deprecating inside,” she admitted. “When I dress like a lady, I tend to be feeling very wild and confident.”

There are plain parallels between her trajectory and that of Billie Eilish, whose career started out when she was only 15 years-old. Much like Gaga, the teen singer has also had to deal with the pressures of being unapologetically herself in an industry that puts so much pressure on women.

Lady Gaga has served us an array of strange, provocative or downright artistic outfits throughout the years–and she pulled off every single one of them. In a similar way, Billie’s own fashion style has been an expression of her artistic identity and values.

Since the beginning of her career, Billie has always been sporting enormously baggy clothes with eccentric prints and accessories. While a lot of people have come to recognize it as her style, it’s important to remember that it’s also a conscious choice on Billie’s part.

Having been exposed to the scrutiny of media, fans and public–some of it so intrusive that it reached the realm of inappropriate–Billie sees her baggy clothes as a shield. In an ad for Calvin Klein, she revealed her truth.

Billie, like Gaga, has reclaimed her agency by not giving in to the world’s expectations. The only difference is, she’s had to do it at an even younger age.

Gaga revealed that it was hard finding an older woman mentor

When Lady Gaga was starting up in the industry, she felt at a loss when it came to finding a female mentor. Back in 2005, the times were different.

“I’ve had a harder time with ­older women in terms of having a female ­mentor. Other than Celine Dion and Carole King, it’s proven ­difficult to have someone who would show me the way,” she admitted.

Yet, Gaga also realized she had to be the change she wanted to see in the industry.

So I really hope that young female artists – or young artists of any gender identity or sexual identity – will know that I am rooting for them.

Don’t wait for change–be the change

Instead of leaving things to the status quo, Lady Gaga decided to be the change the industry needed. In a world where women are so often pitted against each other, she proved that it does not have to remain that way. It’s not enough to just be empathetic–we need to use that empathy and put it into action.