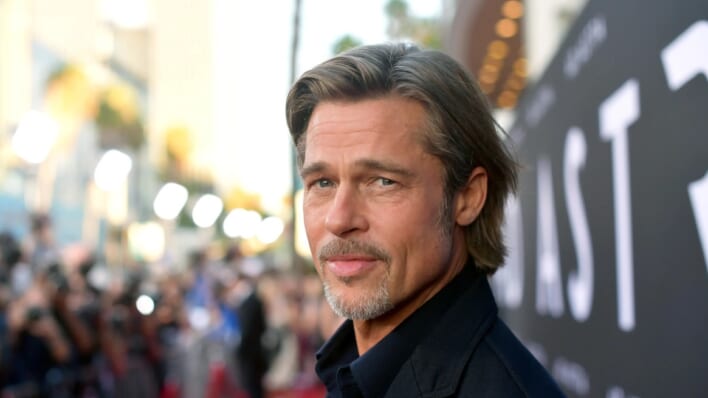 It’s been almost six years since Angelina Jolie began divorce proceedings against Brad Pitt. Now, three years since the divorce was finalized, Pitt is focusing on self-improvement, realistic optimism, and nurturing a sense of purpose in his life.
By Jenna Pearl    August 15, 2022

It’s been almost six years since Angelina Jolie began divorce proceedings against Brad Pitt. Now, three years since the divorce was finalized, Pitt is focusing on self-improvement, realistic optimism, and nurturing a sense of purpose in his life.

When we think about Brad Pitt, what comes to mind is likely one of his iconic film roles – Achilles in Troy, perhaps, or Tyler Durden in Fight Club, or Aldo Raine in Inglourious Basterds. He’s been lauded as a fan favorite as well as a critical darling.

“He’s one of the last remaining big-screen movie stars,” Quentin Tarantino told GQ about Pitt. “It’s just a different breed of man. And frankly, I don’t think you can describe exactly what that is because it’s like describing starshine.”

From his public presence as one of the biggest movie stars in the world, it would be hard to guess that he is privately introspective and actively working to improve his life. But, like so many of us, he’s on a journey of self-improvement and self-discovery.

Prompted by his divorce from Angelina Jolie in 2016, Pitt is completely retooling his life.

According to Pitt, before the divorce, he was drinking, smoking cigarettes, and consuming cannabis to cope with the stresses of stardom.

“I spent most of the ’90s hiding out and smoking pot,” he admitted to the New York Times. “I was too uncomfortable with all the attention.”

His struggles with managing his substance use prompted him in 2016 to turn to Alcoholics Anonymous meetings. He spent the next eighteen months attending meetings and adopting the organization’s policy of cutting out all alcohol and drugs.

RELATED: Jennifer Aniston’s Biggest Regret From Her Marriage to Brad Pitt Is a Lesson for Us All

“I had a really cool men’s group here that was really private and selective, so it was safe,” he told GQ. “Because I’d seen things of other people who had been recorded while they were spilling their guts, and that’s just atrocious to me.”

Pitt also quit smoking during this time, replacing cigarettes with nicotine-flavored gum. “I don’t have that ability to do just one or two a day,’ he explained. ‘It’s not in my makeup. I’m all in. And I’m going to drive into the ground. I’ve lost my privileges.”

Brad Pitt Opens Up About Heartbreak and Happiness

Pitt’s romantic life has been a long and winding road. His first high-profile relationship came when he lived with Juliette Lewis from 1990 to 1993. He then briefly dated Jitka Pohlodek from 1993 to 1994. Gwyneth Paltrow came next, from 1994 to 1997. After that, in 1998, he and Jennifer Aniston started dating and were married in 2000.

The marriage lasted until 2005 when Pitt met co-star Angelina Jolie on the set of Mr. & Mrs. Smith. The couple had their first child a year later, only marrying in 2014. Sadly, the marriage wasn’t destined to last. Jolie filed for divorce just two years later. The couple was fully divorced by 2019.

Musing about life and heartbreak, Pitt told GQ, “I always felt very alone in my life. Alone growing up as a kid, alone even out here, and it’s really not till recently that I have had a greater embrace of my friends and family. What’s that line, it was either Rilke or Einstein, believe it or not, but it was something about when you can walk with the paradox, when you carry real pain and real joy simultaneously, this is maturity, this is growth.”

“I think all our hearts are broken,” he added.

What We Can Learn From Brad Pitt’s Divorce

Pitt kept himself busy throughout the divorce proceedings and continues to keep busy during the pandemic. His production company, Plan B Entertainment, is currently producing a screen adaptation of Miriam Toews’s Women Talking. This is just the most recent thought-provoking project the production company is working on. Pitt also stars in Bullet Train, which is currently in theaters

“I’m one of those creatures that speaks through art,” Pitt told GQ. “I just want to always make. If I’m not making, I’m dying in some way.”

RELATED: Jennifer Aniston and Brad Pitt’s Reunion Has People Talking but for the Wrong Reason

There’s a lot that we can take away from Brad Pitt’s post-divorce strategy. It can be jarring to end a relationship and suddenly start thinking of life in terms of “me” instead of “we” – but Pitt has handled it beautifully, opting to work on improving himself with Alcoholics Anonymous meetings. Focusing on self-care and self-improvement is an excellent way to get through a divorce (or breakup).

Having a realistic mindset is also crucial to navigating the end of a marriage. Pitt recognizes that his heartbreak is real, but it isn’t unique. We all carry some form of heartbreak in our lives. It’s just a part of being human. The trick, as Pitt pointed out, is learning to carry that heartbreak while also making room for happiness in our lives.

Lastly, having a clear purpose will always help you get through a tough situation. Pitt’s a self-proclaimed “maker,” but purpose can come in many forms. Feeling useful and fulfilled, even if it’s not through a paying job, will help you keep your head above water when things get hard.

All in all, Brad Pitt seems to be thriving despite a difficult transition in his life. We could all hope to do the same.

Brad Pitt is Still Fighting the Ghost of Tyler Durden