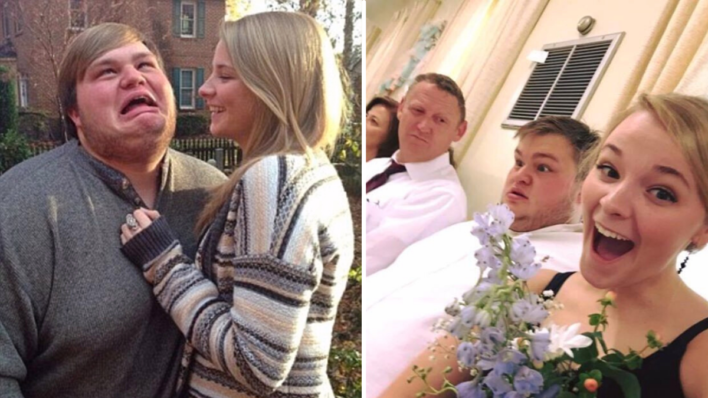 Ashley Stevens reminds the internet that looks aren’t everything.
By Amber Dowling    September 12, 2022

Ashley Stevens reminds the internet that looks aren’t everything.

People fall in love for all kinds of reasons. Yet sometimes, the world feels the need to comment on that love — especially when it’s behind a screen and on the internet.

A woman named Ashley Stevens was reminded of that once when a photo of her and her boyfriend, Christopher Reed, went viral for a ridiculous reason.

Why the Internet Made Rude Comments About a Woman’s Boyfriend

Back in 2015, Stevens and Reed had attended a wedding. There, Stevens caught the bouquet and snapped a selfie while her boyfriend looked shocked in the background. However, when a friend posted that photo to Reddit, no one was prepared for the onslaught of negative comments. And before they knew it, the post had gone viral.

“People were asking if he has Down syndrome and said that he’s too fat to be my boyfriend. That’s just shallow,” Stevens told Today.

“At first, I was kind of upset about it because I wasn’t with Chris when I started reading the comments, and then I saw how he responded to it, and he was laughing about it,” Stevens added to ABC News.

He was taking it really lightly, and so that reminded me that the people that are making comments about him don’t know who we are, and they can’t really judge us because we don’t define ourselves by what other people call us.

How One Woman Responded to Bullies Online

Stevens wasn’t one to sit around and ignore the haters, so she decided to craft her response online. She went on social media and wrote a tribute to her boyfriend, highlighting why he’s so great.

“It surprises me how many people are so quick to judge when they don’t even know you,” she wrote. “I have won the jackpot with Christopher. He may not have rock-hard abs like the world tells girls to want in a guy, but really, why does that even matter when you are trying to find someone you want to spend the rest of your life with?” she continued.

“He is so thoughtful and patient; he always shows me how he loves me in little ways; he is my best friend. I love him for who he is, and he loves me for who I am.”

RELATED: Bullies Call Mom A “Whale” In Front Of Everyone – Her Response Takes Them By Surprise

For his part, Reed laughed off the whole situation, which Stevens revealed is another reason she loves him.

“Honestly, I’ve always been a big guy the majority of my life, and so, of course, I had the comments and the cruel jokes growing up, so I kind of got used to it. I know who I am, and I really don’t care what people have to say about me because I’m confident,” he told ABC News.

“It’s trolls sitting behind their computers. They don’t know us, and they can’t talk about us, so honestly, it just didn’t bother me.”

When the couple first went viral, they weren’t planning on getting married immediately. They wanted to finish school and establish themselves a bit first. However, at the end of 2015, Reed proposed, and the couple is now married and thriving.

“I wouldn’t say it has changed [our relationship]. I would say, if anything, it’s brought us a little bit closer,” Reed revealed before the proposal. “It’s made us understand how much our family and friends support us and our relationship.”

RELATED: Bullies Who Always Excluded Kid With Autism Are Stunned When He Confronts Them In Front Of Everyone

These days this “mismatched couple” whose photo was viewed more than 1.4 million times overnight, works together at the University of Georgia and spread messages of hope, positivity, and love.

“We forgive anyone who made any negative comments,” Stevens previously explained. “I would like them to know that.”

How One Couple Proved the Importance of Focusing on Love

It can be easy to make snap judgements about others, especially when we’re online. But as this couple’s story reminds us, you never know what’s underneath the surface. At the end of the day, looks don’t matter — despite what social media or the world may try and tell us.

Reed and Stevens had a happy ending because they could see past all of that, and in the end, they had a valuable lesson to teach: believe in your partner and yourself and not what the world around you may think.

RELATED: Woman Cruelly Teased And Called ‘Piggy’ By Bullies Gets The Last Laugh

Whether you’re in a relationship and feeling judged by others around you, feeling as though you’re not your best physical self lately and worried about how others perceive you, or just feeling down because someone has judged you in a mean-spirited way, try and remember that those people don’t matter.

As Reed and Stevens proved, we’re all worth more than our looks. And your true tribe will find a thousand other reasons to celebrate you instead.