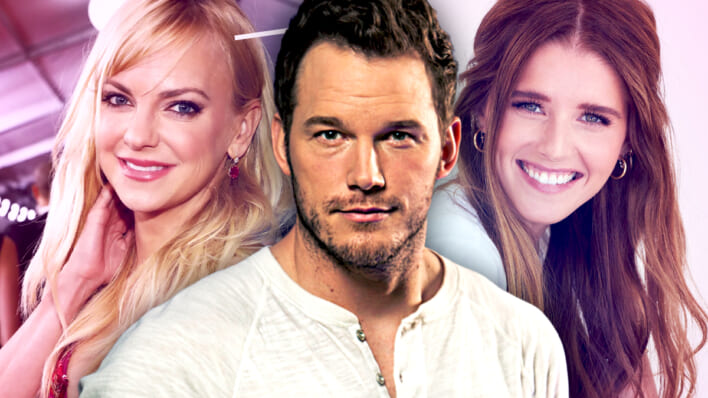 The Jurassic World actor knew exactly what to do — and what not to do — in his second marriage, and why his choice enriched his relationship with Katherine Schwarznegger.
By Shaoni Das    June 24, 2022

The Jurassic World actor knew exactly what to do — and what not to do — in his second marriage, and why his choice enriched his relationship with Katherine Schwarznegger.

Chris Pratt may be the envy of up-and-coming actors across the entertainment scene, but would you want his personal struggles, too?

Over the last decade, the actor, who made his mark as Andy on the workplace sitcom Parks and Recreation, has risen steadily and unceasingly in prominence, knocking out one blockbuster after another. Whether you’re a Marvel fan, a Pixar nut, or a Jurassic Park enthusiast, he’ll have something for you.

RELATED: Anna Faris Reveals The Important Lesson She Learned After Her Divorce From Chris Pratt

Of course, an exhilarating trajectory through the upper echelons of the movie business doesn’t automatically mean an equally successful private life. In fact, he has faced quite a few personal hurdles of late and has attracted several controversies around his faith, and his relationship with Katherine Schwarzenegger.

With the release of the final movie in his Jurassic World trilogy and raising newborn baby Eloise, who he and Katherine welcomed just a few weeks ago, Pratt definitely has his hands full. For most people, recovering from your divorce and building a new life with someone can be intimidating, even debilitating. Chris Pratt, however, never took this change for granted — he studied his mistakes and adjusted his approach to ensure they didn’t repeat.

Chris Pratt, Katherine Schwarzenegger and a Marriage of Controversies

The first thing about Chris Pratt’s three-year marriage with Katherine Schwarzenegger is that it hasn’t been easy, especially considering the public perception surrounding their union.

There was a sizeable contingent of fans who rooted for Chris and Anna Faris, his last partner, and were understandably devastated by their split. Chris and Anna were the perfect comedy pairing, the ones who had been with each other through thick and thin, long before either had exploded into the public consciousness as A-List talent. Therefore, Chris’ new relationship with Katherine was always going to rub some people the wrong way, even though it hadn’t involved anything objectionable at all.

Following his divorce from Anna, Chris Pratt experienced a re-awakening of his Christian faith, which ultimately became the foundation upon which he and Katherine developed their relationship. Recalling how the two crossed each other’s paths, Chris said, “We met at church,” adding that it was “kismet, and a lot of connections” that facilitated their initial bond.

Following a whirlwind courtship, the two tied the knot on June 8, 2019. But their relationship wasn’t the only storm that blew into their lives.

Since getting hitched to Katherine, the daughter of action legend Arnold Schwarzenegger, Chris Pratt has attracted many controversies, and has had to defend himself and his choices several times to the public.

Primary among the concerns of his fans was his association with the Hillsong Church in Los Angeles, which has been accused of being bigoted and discriminatory against the LGBTQ+ community. Chris Pratt took to social media almost immediately to address the accusations and affirmed the church’s inclusiveness:

“I go to a church that opens its doors to absolutely everyone,” he said, adding that the church welcomed him with arms wide open, despite his divorce, and played a pivotal role in helping him forge an enduring mindset around life, family, and his own self.

Nevertheless, he also declared that the church doesn’t “define” his existence, and he doesn’t claim to be its spokesperson. “My values define who I am. We need less hate in this world, not more. I am a man who believes that everyone is entitled to love who they want free from their fellow man,” he said on Instagram.

Unfortunately, this wasn’t the only or last backlash Chris received in recent years. Last year, he unintentionally instigated more uproar after commending his wife for bringing a “healthy daughter” into the world, which people read to be a direct jab at the actor’s son, Jack, who was born prematurely with cerebral hemorrhage. Chris Pratt indirectly responded to the outrage the following day, revealing that he had gone to bed “depressed” and “upset,” but was ultimately able to pull himself together with a run in the woods.

Chris and Katherine’s relationship, as well as the faith and devotion they share, has been sharply condemned at every turn. However, Chris doesn’t let external noise influence his parenting style; he continues to absorb what he believes to be powerful principles, and is focused on building a blended family unit underpinned by love, respect, and transparency.

In a candid interview detailing the secret to his marriage with Katherine, the Guardians of the Galaxy actor said he and his wife continually make sure they’re aligned on where they stand. His advice? “Communicate. Listen, listen to your partner with intention. Care about each other’s feelings and support one another and just listen,” he told Entertainment Tonight.

Additionally, having been through a divorce, Chris wanted to guarantee that he and Katherine were a good match for each other. Thus, they underwent pre-marital counseling to get to know each other and their expectations for their impending union. Katherine said it might not be a usual course of action for many spouses-to-be, but it consolidated their decision to walk down the aisle and enabled them to go a layer deeper around the partnership they’ve established.

Considering how Chris and Anna’s marriage broke down due to a failure in communication, it’s no wonder why Chris and Katherine have made this their priority. Even Katherine raved about their communication skills to US magazine and how both husband and wife make a genuine effort in being transparent about where they stand:

I got married last June, and just communication constantly is, like, really the most amazing gift you can have, I think, in a partnership and in a relationship. … I don’t like to go to bed angry. And we both are the same way.

Katherine Schwarznegger to US Magazine

What Can We Learn From Chris Pratt’s Divorce?

The two celebrated their third marriage anniversary in 2022, and are basking in the arrival of their second child together. They couldn’t be happier and more grateful to be in each other’s company as they go through this wild, unpredictable journey called life.

Chris Pratt’s seemingly near-effortless marriage with Katherine took a lot of work, but it demonstrates that your life doesn’t have to be over after divorce. There is always a chance for you to get back on your feet and adjust your mindset. You don’t let your mistakes stand in the way of happiness; you learn from them and make sure they weren’t wasted.