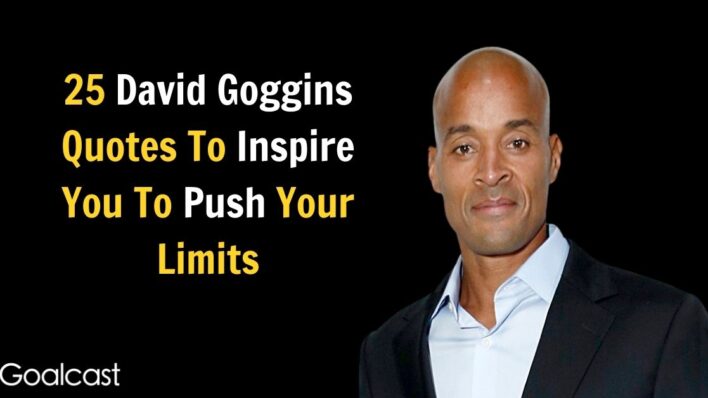 David Goggins is a strong example of what the human body can achieve when there’s enough willingness and motivation. Here are 25 David Goggins quotes to inspire you to push your limits.
By Flavia Medrut    December 28, 2020

David Goggins is a strong example of what the human body can achieve when there’s enough willingness and motivation. Here are 25 David Goggins quotes to inspire you to push your limits.

David Goggins is an accomplished endurance athlete, motivational speaker, and author. Often referred to as the toughest man alive, Goggins is a strong example of what the human body can achieve when there’s enough willingness and motivation.

The now retired Navy SEAL, is proud to be the only member of the U.S. Armed Forces ever to complete training as a Navy SEAL, Army Ranger and Air Force Tactical Air Controller. Goggins has competed in more than 60 ultra-marathons, triathlons and ultra-triathlons. In 2013, the athlete broke the Guinness World Record as he managed to complete 4,030 pull-ups in 17 hours.

Each of David’s achievements seems like something only a super-human could do. However, before becoming famous for his incredible performances, Goggins worked as an exterminator who was out of shape and was living paycheck-to-paycheck. He credits his transformation to self-discipline, mental toughness, and hard work.

If you want to learn more about shutting up the voice in your head that says “I can’t”, then you should definitely check out his book Can’t Hurt Me: Master Your Mind and Defy the Odds.

Here are 25 David Goggins quotes to inspire you to push your limits:

The only person who was going to turn my life around was me. The only way I could get turned around was to put myself through the worst things possible that a human being could ever endure.

You gotta start your journey. It may suck, but eventually you will come out the other side on top.

A lot of us don’t know about another world that exists for us because it’s on the other side of suffering. That’s the real growth in life.

The things that we decide to run from are the truth. When you make excuses, you’re running from the truth.

We all want to take this four-lane highway, but we always step over the shovel. All I did was pick up that shovel and made my own path.

Life is a battle between trying to find more of yourself knowing that the real you is afraid, likes comfort, likes to be patted on the back, and doing what you need to do to get better.

The most important conversation is the one you have with yourself.

My happiness is my reflection on the suffering during my journey and knowing that I never quit nor was I guided by anybody on this earth.

If you can get through doing things that you hate to do, on the other side is greatness.

Everyday you’re trying to find more of what you’re capable of – and that’s the big question. What are you capable of? Stop doing the things that you do every day. If you run everyday, go swim.

The only way that you’re ever going to get to the other side of this journey is by suffering. You have to suffer in order to grow. Some people get it, some people don’t.

The only reason why I became successful was because I went towards the truth. As painful and as brutal as it is, it changed me. It allowed me, in my own right, to become the person who I am today.

People take classes on self-help, mental toughness, breathing control — the only way to get tougher is to put yourself in hellacious situations.

As humans, we’re reading books everyday to try to figure out how to be someone else. What we don’t do is go inside, turn ourselves inside out, and read our own story. You have to look inside to find out what you really want.

We are all great. No matter if you think you’re dumb, fat, been bullied, we all have greatness. You gotta find the courage. It’s going to be hard work, discipline, and the non-cognitive skills — hard work, dedication, sacrifice — that will set you apart.

If you’re not physically and mentally prepared for what life is going to throw at you, then you’re just going to crumble, And then, you’re no good to nobody.

We like to live our lives on social media with lies about ourselves about how great we are. Get to the source! Fix the problem.

Life is one big tug of war between mediocrity and trying to find your best self.

The more things you can do to get outside of that zone that makes you feel good, the stronger your mind is going to get. It starts getting used to doing things like this. It’s not fun, but now my mind is used to it.