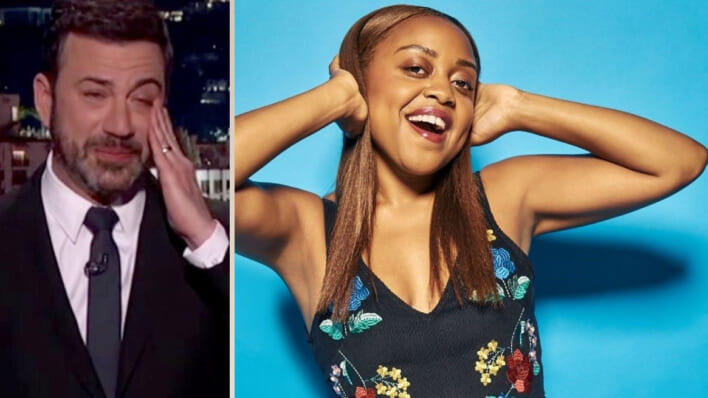 A historic moment in the spotlight could have been derailed by a misguided attempt at comedy, but Quinta Brunson has a lot of experience stepping over obstacles in her way.
By Mark Millien    September 15, 2022

A historic moment in the spotlight could have been derailed by a misguided attempt at comedy, but Quinta Brunson has a lot of experience stepping over obstacles in her way.

The 2022 Emmy Awards will most likely be remembered for leaning into a firmly musical aesthetic, an incredible pair of speeches from Lizzo and Sheryl Lee Ralph, and perhaps most, unfortunately, a pivotal moment in Black history achieved by Quinta Brunson that Jimmy Kimmel unfortunately hijacked.

RELATED: Sacheen Littlefeather Was ‘Shocked’ by Her Oscars Apology – Her Response Was More Surprising

Awards shows are prone to memorable mishaps due to their extravagant nature, hyperfocused scrutiny, and live televised ceremonies. While this year’s Emmy Awards weren’t nearly as dramatic as the Oscar’s and Will Smith’s slap, it still had its own groundbreaking highlights and lowlights, both including the massively talented actress, writer, and comedian Quinta Brunson.

Who Is Quinta Brunson?

Quinta Brunson is the youngest of five children (hence the name) and a native of Philadelphia, Pennsylvania. She studied at Temple University before eventually moving to Los Angeles to pursue her artistic and professional aspirations. Within a year she had begun to make a name for herself with her micro-series The Girl Who’s Never Been on a Nice Date. Due to its phenomenal success, she was able to parlay her skillset into a production deal with Buzzfeed .

RELATED: Keke Palmer’s Response to Zendaya Comparisons Is a Powerful Lesson in Self-Belief

After producing original digital content for the big tent publisher that garnered millions of views, she began to gain traction as an actress in projects she didn’t helm (iZombie, Lazor Wulf) as well as recognition for the content she continued to spearhead (Quinta vs. Everything, Quinta & Jermaine).

In 2019 she began writing and co-starring on HBO’s A Black Lady Sketch Show and two years later she published She Memes Well, a collection of essays reflecting on her journey as a talented Black woman mastering her craft.

What Happened With Jimmy Kimmel During Quinta Brunson’s Acceptance Speech?

After 35 nominations and three wins, Jimmy Kimmel’s immensely popular late-night television show has yet to win Outstanding Variety Talk Series Award. Tuesday evening was the site of yet another loss and during his award presentation with Will Arnett, the two decided to play up the most recent defeat in dramatic fashion.

Arnett hauled a non-responsive Kimmel by the ankles across the stage until unceremoniously letting him lie prone in front of the microphone. Their gig was that Kimmel sought solace in the comfort that could only come from binging “skinny margaritas” in the back room. Arnett then proceeded to recover the list of nominees from Kimmel’s ‘unconscious’ form to announce the nominees.

After a lengthy pause, Arnett announced Brunson as the winner for Outstanding Writing For a Comedy Series. The multi-talented actress alighted onto the stage, navigating the heap of Kimmel’s limbs, and set about to accept her place in history.

As Kimmel was on the floor, Brunson said, “I won, Jimmy.” Kimmel gave only a thumbs up sign to this.

For context, Brunson is the first Black woman to have ever won the award without a writing partner and she did so in the name of a show, Abbott Elementary, that she created, stars in, and serves as showrunner.

The critical consensus surrounding the show’s excellence is remarkable. At the time of writing, the sitcom has a 98% critics score on Rotten Tomatoes and a 90% audience score. Since its very first episode, the reviews have been laudatory, with an emphasis on the chemistry of its cast and the genius of its dialogue.

Many viewers took offense with Kimmel’s dedication to the skit considering the weight of the moment. Instead of accepting Brunson’s invitation to get up as she awkwardly managed her footing around him, he offered only a thumbs up in response.

In the spirit of the comedy improv edicts that demand a performer take as true anything supplied by their scene partner, Brunson asked Kimmel to hold her phone and proceeded with her speech.

Considering the rising tension in the room manifested, if she had opted to do otherwise highlights how she deftly sidestepped a host of poor outcomes.

Jimmy Kimmel and Quinta Brunson’s Response After the Fact

Brunson was well within her rights to demand that she be allowed to occupy the space of her accomplishments without any undue distractions, especially since the anchor in question was designed specifically to amplify one artist’s failure in the wake of another’s success.

There are also those who can fairly criticize the complexion of race in the face of this perhaps unintended slight. Kimmel’s credentials as a progressive-minded advocate for equality do not necessarily insulate him from criticism that the specificity of these circumstances should have outweighed any perceived comedic obligations. An unawareness of that imbalance did not absolve him of seeing beyond the myopic crawlspace of his own creation.

RELATED: How Jessica Chastain Found Calm At Oscars After Will Smith Slap

If Brunson had done so however, there is a good chance that the conversation she has earned around her incredible accomplishment would only be further overshadowed. In that moment she was forced to make a decision to either ignore a potential irritant or provide it with more energy and in choosing the former she allowed others to narrate their perspective of the experience while leaving her undisturbed on her island of excellence. The option to give grace to an uncomfortable situation can be difficult and unfair, especially if it is not self-imposed but in reaction to the insensitivity of others.

One such immediately accessible alternative in handling a similar situation is imbued in the collective pop culture consciousness forever. When Will Smith ascended the stage at the Oscars earlier this year and opted to right a perceived grievance by slapping Chris Rock, the hosts of the venerable awards show described it as “traumatizing” amid the months-long public autopsy of what transpired that night.

No one from the Emmys was ever in any real danger of a physical confrontation but it isn’t hard to imagine someone with less patience erring on the side of righteous indignation as opposed to humorous resignation.

How Quinta Brunson Didn’t Let Anyone Steal Her Moment

Brunson’s success did not come overnight. She began as a storyteller on social media whose clever quips and relatable characters garnered a sizeable loyal audience. She later parlayed that devoted fanship to other projects and even credits Kimmel with giving her one of her first considerable opportunities in a crowded late-night landscape, bolstered by the work she had done up to that point. He was one of the first people on the planet to ever see the pilot of the show that led to this controversial moment.

RELATED: These Celebrities Have a ‘Weird’ Approach to Social Media – And It Might Save Your Life

Her response after the show mirrored her balance of equanimity and comedic instincts on display during the broadcast.

“Tomorrow maybe I’ll be mad at him. I’m going to be on his show on Wednesday, so I might punch him in the face.”

Magnanimously, Brunson has reserved the right to be upset about what occurred at a later date and has simply refused to be baited into dimming the radiance of her triumph with the ill-timed use of Kimmel’s brand of pouting.

Conversations of white privilege and the late-night host’s blindspots are frankly irrelevant to the deserved discourse. As far as privilege is concerned, it seems reasonable to assume Kimmel’s response would have been the same no matter who won the award. Of the twelve people who were eligible to win the award, only Bruson and Stefani Robinson were Black, but there were other nominees of color.

There is no good-faith reason to assume Kimmel would have abandoned the routine for a white winner, but again this is all beside the point. Discussing it in those terms shifts the onus of coverage from Brunson’s laurels and grace to his questionable exploits and she has earned her time in the sun devoid of any manufactured shadows.

Kimmel did offer this to say, “I’m sorry I did do that, actually. And also, the last thing I would ever want to do was upset you because I think so much of you. And I think you know that — I hope you know that.”