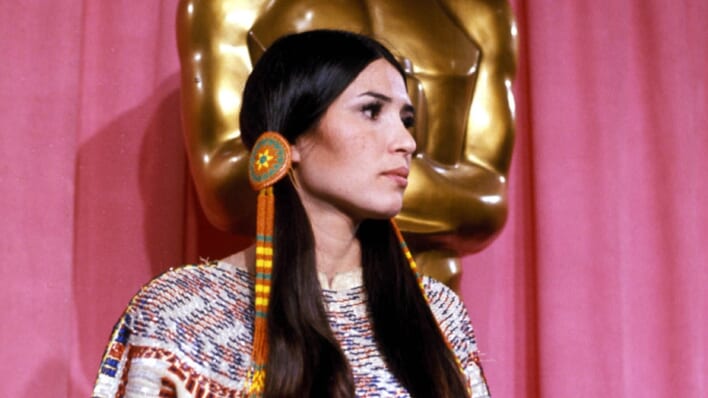 The Native American civil rights activist and former actress has embraced “love, gratitude and forgiveness” since being mistreated at the 1973 Oscars.
By Laurence Lerman    August 24, 2022

The Native American civil rights activist and former actress has embraced “love, gratitude and forgiveness” since being mistreated at the 1973 Oscars.

Sacheen Littlefeather’s onstage appearance at the 1973 Academy Awards remains one of the most memorable and controversial moments in the history of the Oscars, the craziness of Will Smith and “The Slap” several months ago notwithstanding.

Here’s what went down:

The incomparable Marlon Brando had been awarded the Oscar for Best Actor for his performance as Don Vito Corleone in The Godfather, his name announced by presenters Roger Moore and Liv Ullman. Up from the audience rose not Brando, but rather an unknown, striking 26-year-old woman named Sacheen Littlefeather.

RELATED: Watch 10 of the Most Inspiring Oscars Speeches of All Time

Clad in Native American garb, the activist and aspiring actress walked onto the stage and refused to accept the statuette. In a short, prepared speech on behalf of Brando, Littlefeather offered that the award-winning actor was turning down the Oscar as a protest against “the treatment of American Indians today by the film industry.” She also cited the ongoing siege of 200 American Indian Movement activists, who had occupied the South Dakota town of Wounded Knee to protest the ongoing abuse of Native Americans.

The Reaction to Sacheen’s Oscar “Debut” Was A Strong One

The unprepared audience at Los Angeles’ Dorothy Chandler Pavilion reacted with a confusing combination of boos, jeers, and a smattering of applause. Then, little more than a minute after Littlefeather had taken the stage, she exited to the right, followed by a slightly dazed Moore and Ullman. Littlefeather headed to the press room to deliver a lengthier speech on the issues.

Legendary actor John Wayne, who reportedly was seething with anger, had to be restrained by backstage security guards from possibly assaulting her. Here it’s worth noting that Littlefeather, who is of White Mountain Apache and Yaqui descent, was the first-ever Native American woman to stand on the stage at an Academy Awards ceremony.

Now, nearly fifty years later, the Academy Museum of Motion Pictures has formally apologized to Littlefeather for the treatment she received that evening and in the years that followed. The apology began in the form of a letter sent to her this past June from former President of the Academy of Motion Pictures Arts and Sciences David Rubin (his term ended earlier this month).

“The abuse you endured because of this statement was unwarranted and unjustified. The emotional burden you have lived through and the cost to your own career in our industry are irreparable. For too long the courage you showed has been unacknowledged. For this, we offer both our deepest apologies and sincere admiration,” read a portion of the correspondence.

Additionally, the Academy announced that it will hold a special program with Littlefeather, entitled “An Evening with Sacheen Littlefeather,” on September 17 at the Academy Museum. The activist and former actress will participate in a conversation with producer Bird Runningwater, co-chair of the Academy’s Indigenous Alliance.

The Academy describes the upcoming event as an evening of “conversation, healing, and celebration.”

For her part, Littlefeather, now 75 and residing in Northern California, announced that she was “stunned” by the apology. “I never thought I’d live to see the day I would be hearing this, experiencing this,” she said.

RELATED: How Jessica Chastain Found Calm At Oscars After Will Smith Slap

Her shock was underlined by graciousness and humor at the near surrealness of the Academy’s declaration.

“Regarding the Academy’s apology to me, we Indians are very patient people — it’s only been 50 years!” said Littlefeather, who is currently battling metastasized breast cancer. “We need to keep our sense of humor about this at all times. It’s our method of survival.”

For attendees and viewers of that fateful Oscar night back in 1973, the happening may have come and gone and lent itself to some initial chit-chat on the party circuit, but for Littlefeather, who says she originally met Brando “through his interest in the Indian movement,” the effect was long-lasting.

She has spoken of how her acting career came to a halt, beginning with the federal government’s threats to halt any talk shows or productions that planned to put her on the air. And though Littlefeather had a fledgling film career — she appeared in minor, uncredited roles in the Hollywood productions The Laughing Policeman (1973) and Freebie and the Bean (1974) — there weren’t many more opportunities forthcoming. Before the decade’s end, the acting chapter of Littlefeather’s life came to a close.

Sacheen Has Been A Native American Activist For Decades

Currently, the president of the National Native American Affirmative Image Committee (with which she’s been associated since the 1960s), Littlefeather has spent the past four-plus decades working to provide health-care education and advocacy in the Native American community. She has also pursued a career in hospice care, worked in helping AIDS patients alongside Mother Teresa in the 1980s, and led a prayer circle devoted to the first Native American Catholic saint, Kateri Tekakwitha.

Clearly, Sacheen Littlefeather saw a future beyond an audience of buzzing Hollywood folk in evening attire and the possibility of an acting career in a handful of genre movies.

RELATED: 49 Powerful Quotes from John Lennon to Live and Love By

The AMPAS apology and upcoming event with Littlefeather are hopeful examples of how Hollywood continues to attempt to rectify issues in its tricky past while demonstrating the necessity of respect for all peoples’ dignity regardless of their heritage, cultures, and traditions.

That Littlefeather can today smile about the abuse she received at the decades-old incident, along with the subsequent boycotting of her career as an actress, is a remarkable and wonderful example of pride, perseverance, and positivity.

Through It All, Sacheen Has Responded with Grace and Humor

As the Academy and Littlefeather’s scheduled attendance at the upcoming special program illustrate, it’s never too late to right a wrong or, at the very least, begin a healthy, forward-thinking conversation on the different views held in this time of greatly divided opinions. It can only lead to some constructive steps forward.

RELATED: 8 Famous Quotes from Famous People That Will Inspire You to Love Yourself More

Concluding her Oscar night speech to a worldwide audience all those years ago, Littlefeather said, “I beg at this time that I have not intruded upon this evening and that, in the future, our hearts and our understandings will meet with love and generosity.”