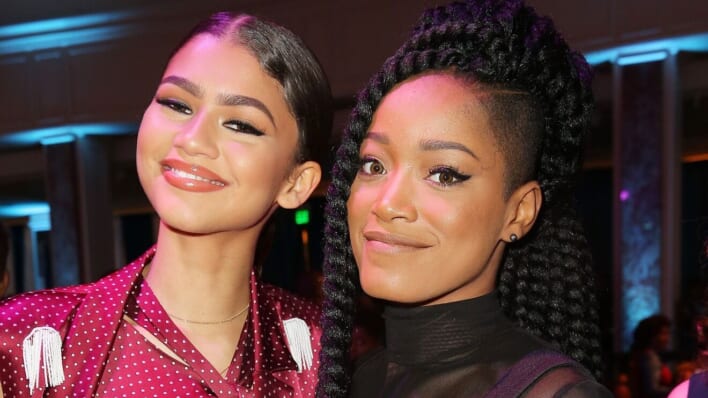 When compared to a fellow Disney contemporary and peer, Keke Palmer set the record straight on what makes her unique.
By Shaoni Das    September 14, 2022

When compared to a fellow Disney contemporary and peer, Keke Palmer set the record straight on what makes her unique.

Keke Palmer will not stand for a pity party at her expense.

As the star of Jordan Peele’s 2022 horror comedy Nope, she’s been racking accolades left, right, and center as of late. Both supporters and critics have identified her as a bonafide movie star, someone who can charm audiences as reliably as she can deliver a thoughtful, nuanced performance. From inadvertently producing viral memes to showcasing fierce red-carpet looks, she’s become a delightful presence in pop culture, finally receiving the widespread admiration she deserves.

However, even with her catastrophic ascension, many have been wondering: how has it taken this long for Palmer to break out and get recognized for her talent? She’s a former child actor who made her debut at just nine in Barbershop 2: Back in Business. Then, she rose through the ranks to star in some of the funniest, most memorable Disney and Nickelodeon features, such as Jump In, The Wool Cap, True Jackson, VP, Winx Club, and more. It was only time until she broke out of her child star bubble and stormed the big leagues with her irresistible flair and abilities.

However, instead of being thrilled with Palmer’s rise, some people on social media decided to compare her career to that of Zendaya. Nevertheless, Palmer’s surprising yet level-headed response is a salient lesson in being grateful and appreciative of what you bring to the table.

It all started with a long, analytical Twitter thread posted shortly after Nope’s release. A Twitter user wanted to do a deep-dive between Zendaya and Keke Palmer’s respective journeys. She argued that were it not for colorism in entertainment, Palmer would have had the same opportunities as Zendaya, and, therefore, would have achieved the same level of “mainstream popularity.” After all, both had nearly identical beginnings and were doing incredibly similar types of roles at the turn of the decade. However, it didn’t go as planned for Palmer, and in her view, Zendaya flourished and jumped ahead, leaving Palmer struggling to catch up.

RELATED: The Real Reason Why Zendaya Is Staying Away From Relationships

Though the tweet was well-intentioned and only sought to dissect the genuine issue of colorism within our communities, it didn’t reveal the whole picture. Fame, in its current format, is increasingly difficult to measure, and so it becomes a little futile to try to decipher the root cause of someone’s popularity and then make baseless comparisons with their peers.

Palmer, being the social media maestro that she is, took no time to issue her own response to the debate. Instead of agreeing to the narrative being woven on her behalf, she wanted to shift perspective and show her fans what her achievements really mean to her.

The 29-year-old began the thread by saying that comparing herself with another actress is a sign of colorism itself. “A great example of colorism is to believe I can be compared to anyone,” she wrote. Then, she proceeds to list her accomplishments: “I’m the youngest talk show host ever. The first Black woman to star in her own show on Nickelodeon, & the youngest & first Black Cinderella on broadway.”

Calling herself an “incomparable talent,” she wanted to let everyone know that her body of work is rich, varied, and impactful, despite what anyone says. But unfortunately, only the media and the masses perceived Nope as her claim to fame; in reality, she’s been shining through for a long time and doesn’t need to be portrayed as a weakling who lost the fight to Zendaya.

In a follow-up tweet, the Hustlers co-star reminded her followers that she has over 100 credits and has been a leading lady since the age of 11. Today, she may be starring in a blockbuster summer hit, but this isn’t the beginning nor the end. Instead, it’s just the next phase of the dazzling story of Palmer, who has well and truly made her mark on Hollywood.

Keke Palmer’s Approach to Racism and Colorism: “I Ignore It.”

The Twitter thread wasn’t the only time Palmer spoke out about the racism and colorism prevalent in the industry. In an in-depth interview with The Guardian, she discussed while some folks are only waking up to her brilliance now, others have known about her for a long time. “It’s pretty normal, I think, especially as a Black entertainer,” she said. She recalled an interview featuring “maybe Luther Vandross” that she feels mirrored her own experience with fame. The entertainer was reportedly asked about what it felt like to be “mainstream.” His response: “Well, I’ve always been mainstream; you’ve just found out.”

Palmer’s approach to racial bias and discrimination is a little atypical in that she doesn’t let these biases shape her day-to-day. So many performers let the anger and the hate fuel their work, the rage keeping their artistry burning, pushing them to the highest, most profound levels possible.

But Palmer’s strategy is not to let any of the noise faze her. “People would always ask me: ‘How do you deal with colorism? How do you deal with being Black in this industry?” she stated. “Because the truth is, I ignore it. I ignore it.” At the end of the day, she has a life to lead, and if you’re too busy letting yourself get absorbed and extended by the discourse, you’re not going to be able to find any satisfaction. This doesn’t mean that racism and colorism aren’t enormous forces impacting many critical outcomes in Hollywood. Still, simultaneously, Palmer is careful about not painting herself as any type of a “victim.”

“You believe I’m not doing enough, not because I’m not but because you don’t believe that I can be enough. And that is colorism,” she said. The Illinois native doesn’t want young Black girls to limit themselves in any way, shape, or form; instead, they should be spurred on to follow their dreams without feeling like they’re competing against more privileged women.

Palmer’s attitude is a strong lesson in defining your own markers of success and glory. No one has been on the exact journey you have, and therefore, they don’t have the right to determine what marks an achievement for you.

RELATED: Who Are Zendaya’s Parents And Why Did She Have To Defend Them To The World

They don’t have the right to decide what your ‘breakout’ is or how valuable your work has been. Only you can recognize the significance of every one of your milestones and how much they mean to you. If you’re happy with where you are in your path, that’s all that matters, and no one can take anything away from the moment.