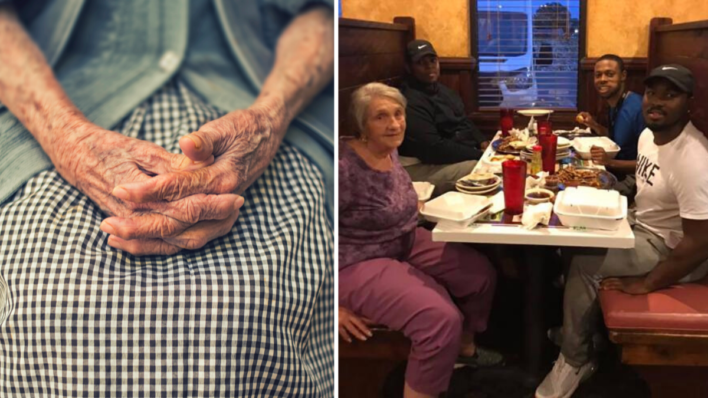 Three young men took an elderly woman under their wing when they saw her eating alone.
By Sophie Babinski    June 23, 2022

Three young men took an elderly woman under their wing when they saw her eating alone.

Losing a spouse is one of the hardest things that somebody has to live through. After decades of marriage, partnership, highs, and lows, finding yourself alone again can be very lonely. Oftentimes, grown children have their own responsibilities and families and can’t give lonely parents all of the attention they might need.

For one woman in Alabama, meeting three kind strangers helped mitigate the pain, loneliness, and grief of loss.

How a Chance Encounter Led to an Unlikely Friendship

Jamario Howard, JaMychol Baker, and Tae Knight were spending the evening letting loose and grabbing a bite to eat at Brad’s Bar-B-Que, their favorite local eatery in Oxford, Alabama. There, they spotted an elderly woman eating alone.

While she did not necessarily look like she was in distress, she looked lonely and nostalgic. Jamario, who felt that he would not like to be eating alone, approached the woman and asked if he could sit with her. Their conversation took a touching turn.

Jamario discovered that the woman, whose name was Eleanor, had recently lost her husband and that it would have been her 60th wedding anniversary. Instead of staying home and wallowing in her pain on the special day, the woman decided to celebrate even without her husband — after all, he was always there in spirit.

Jamario, JaMychol, and Tae decided to invite the widow to eat her celebratory dinner with them. The woman eagerly accepted the invitation.

I instantly gave my condolences and asked her to come eat with us, which she was excited to do.

Howard and his friends were deeply touched by their dinner with the woman and decided to share the experience on social media. Jamario shared a photo of the encounter on his Facebook page, along with the story of how the foursome ended up eating together.

RELATED: How One Elderly Man Continued to Eat Lunch with His Wife – Even After She Passed Away

The message Jamario wanted to get across to the public? Make sure to visit those you love! You never know who is feeling especially lonely and even a simple phone call might turn someone’s day around.

“[I] can’t stress this enough. GO SEE YOUR MOM AND YOUR GRANDPARENTS. They miss you!!” Jamario Howard ended the sweet post on Facebook.