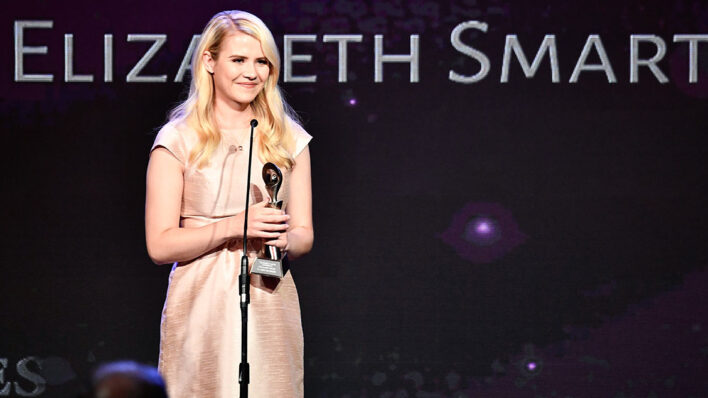 Elizabeth Smart is known as “the girl who was kidnapped,” but she’s really a survivor who is very much in control of her own experience and future.
By Flavia Medrut    October 11, 2019

Elizabeth Smart is known as “the girl who was kidnapped,” but she’s really a survivor who is very much in control of her own experience and future.

To many people, Elizabeth Smart is best known as “the girl who was kidnapped.”

At age 14, a quiet, devout Elizabeth, who played the harp and loved horses, was kidnapped from her own bed by a fanatic named Brian David Mitchell and his wife, Wanda Barzee.

It was a story that caught the world’s attention and horrified us all– but it wasn’t the end of Elizabeth’s story. It was just the beginning.

Elizabeth was held captive for nine months during which she was forced to endure things no human being should. The man who took her “made” her his new wife. He repeatedly drugged and raped her until she was finally freed, in March 2003.

Her parents had never given up the search and ensured wide-spread media coverage of Elizabeth’s kidnapping kept her face clear in everyone’s minds, even as her captor forced her to appear in public in disguise.

One day a passing couple recognized her captor from a news report on the suspect and notified a police offer, who asked Elizabeth if she was Elizabeth Smart.

She couldn’t say anything at first, as her kidnappers constantly kept an eye on her and had already trained her regarding what she should answer in such circumstances.

Luckily, another officer took a different approach. He separated her from Mitchell and Barzee, and told Elizabeth that her family loved and missed her very much, and that they’d never stopped searching for her.

Authorities arrested Mitchell and his wife and returned Elizabeth to her family that same evening.

Coming back home after 9 months of living hell

When she found herself back into the arms of her loving family, Elizabeth had no plans to speak publicly about what happened to her. In fact, she didn’t want to talk about it at all, to anyone, but sometimes she had to — investigators and attorneys constantly interviewed her.

So Elizabeth became her own hero. Despite everything that had happened to her, she somehow managed to return to a relatively normal life shortly after she was reunited her family.

Moreover, she even hiked with them to the camp where she was taken by her kidnapper — the experience empowered her, it has made her feel triumphant.

Elizabeth returned to school and resumed her favorite activities; her greatest passion was playing the harp. So after graduating, she enrolled at Brigham Young University to study music performance.

Your past shapes you, but doesn’t define you

Elizabeth’s mother gave her a piece of advice that helped her redefine who she now was: a strong young woman that will not let her trauma steal more life and energy than it already has.

the best punishment you could ever give them is to be happy, is to move forward with your life. Because by feeling sorry for yourself, by holding on to the past, by reliving it, that only allowing them to steal more of your life away from you.

LOIS SMART TO HER DAUGHTER

Six years after Mitchell’s arrest, Elizabeth decided to confront her captor during a trial and tell the story in her own words. After all, no one else knew more about the things she went through.

The ones who hurt Elizabeth had no power over her anymore and they had to know that they didn’t break her.

That’s not everything that happened — that’s not my whole story. Instead of leaving it to the courts to tell, I felt like I deserved to tell my story.

Rediscovering her goals and dreams

Elizabeth realized that she used to have dreams and goals and refused to give up on them.

She had grown stronger throughout her experience and decided not to feel sorry for herself without locking herself away from hope or potential.

By keeping a fresh attitude and emanating strength and grace, she became an activist on behalf of kidnapping survivors and child victims of violence and sexual abuse.

We have the choice to stay in bed and keep the covers pulled over us, or we have a choice to move forward.

AT TEDx, UNIVERSITY OF NEVADA

Elizabeth has become a great public speaker who constantly encourages other victims to come forward and not give up on themselves. She strongly believes that hope and forgiveness can help anyone survive their trauma.

Forgiveness is rightly seen as an act of kindness toward others, and it can be. But when we do it, we actually give ourselves a gift.

Forgiveness does not mean accepting what was done to us, but acknowledging everything and give ourselves a chance to start fresh, and above all, a chance to heal.

Elizabeth grasped the concept better than most and she is living proof that by forgiving we allow ourselves to move on.

As Elizabeth now travels and talks about her experience, people approach her and tell her what has happened to them, often in a whisper. It might not seem much, but this is a huge step for victims who are usually ashamed or afraid to talk about their abuse.

From Elizabeth’s cruel experience flourished an intense desire of teaching others that bad things happen to all of us, but we do hold the power to change how they affect the rest of our lives.

There are two types of survivors. Those who didn’t die — and those who lived.

In 2008, Elizabeth helped to author the United States Department of Justice handbook for kidnapping survivors — You Are Not Alone: The Journey from Abduction to Empowerment; and in 2011 she launched the Elizabeth Smart Foundation, which aims to empower children and provide resources and trauma support for victims and their families.

While helping others, she also allowed herself to be happy and become the woman she dreamed to be as a little girl — and also found a man who loves her with whom she built a beautiful family.

In October 2013, Elizabeth released a memoir entitled My Story, and continues to advocate for sexual abuse survivors and vulnerable people everywhere.

She refuses to be defined by her past traumas or to allow others to label her. Instead, Elizabeth chooses to focus on moving forward into her free life, and helping others along the way.