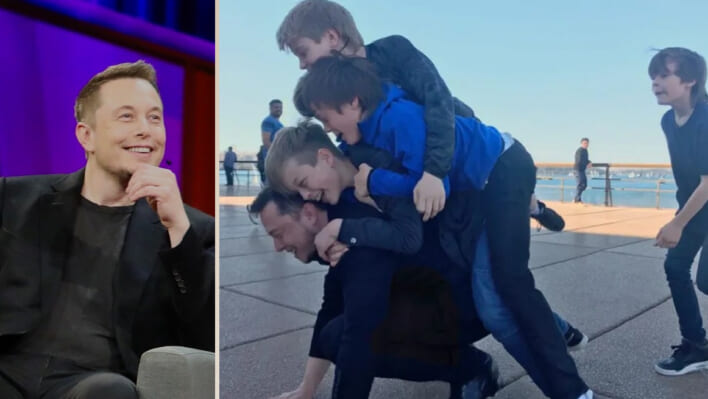 Meet Elon Musk’s Children: His Odd But Uplifting Reason for Having 10 Kids

After acquiring Twitter, firing half the force, hiring some back, and otherwise making the news daily, there are many questions about Elon Musk that need to be answered.
By Mark Millien    November 16, 2022

After acquiring Twitter, firing half the force, hiring some back, and otherwise making the news daily, there are many questions about Elon Musk that need to be answered.

Twitter is now yet another in Elon Musk’s impressive portfolio. As a founder, or co-founder, of PayPal, Tesla, and SpaceX, Musk has forged a path to becoming the world’s richest human in a very unconventional way. However, as nontraditional as his entrepreneurship has been, his philosophical role as a patriarch to his ever-broadening brood is perhaps even more outside the mainstream. Elon Musk is the father to a total of 10 children.

According to a new report from Insider, Musk is the father of twins with Shivon Zilis, a top executive at another of his companies, Neuralink, who specializes in artificial intelligence and human digital interfaces. As his holdings and family expand, it is worth looking at how the most affluent person on the planet goes about the business of parenting.

In January 2000, Musk married Justine Wilson, a writer who he’d met at Queen’s College while they were both students, though their romance did not ascend past awkward dates and casual flirtations until some years later. Their firstborn, Nevada Alexander Musk, arrived in 2002 but the baby was only alive for ten weeks before succumbing to sudden infant death syndrome, a mysterious malady known as SIDS that claims 2,300 infants a year in the United States.

RELATED: What Elon Musk And Grimes Teach Us About Finding The One

Two years later, the couple had twins Griffin and Vivian, and two years after that they conceived a set of triplets, Kai, Saxon, and Damian.

In 2020 Musk, and the singer Grimes, welcomed their son, X AE A-XII. They had another child, a daughter named Exa Dark Sideræl, in November 2021, and one month later Zillis and Musk welcomed their pair of twins.

Elon Musk Just Wants to Be a Dad

Musk told Page Six that he would have “as many as I am able to spend time with and be a good father.” He has highlighted his close relationship with all his children, except his eldest daughter Vivian.

Vivian Jenna Wilson filed in April to have their name legally changed one day after turning 18 and also petitioned a court in Los Angeles to sever ties with Elon Musk as her father. There has been speculation that Wilson took this action in response to some of Elon’s statements on Twitter in regard to the trans community, specifically the preponderance of pronouns in daily discourse. Elon blames Neo-Marxist ideologies for his estrangement from his daughter.

The deterioration of Musk’s relationship with Vivian mirrors the fracturing of his own relationship with his father, a man he has described as an architect of great evil. Though the details of what transpired between the two men aren’t exactly clear, one can surmise that Elon doesn’t wish to be the type of person he perceives his father to be, which can be one of the most powerful motivations in fatherhood.

Elon’s own father, Errol Musk, has been a magnet for controversy in recent months. In August during an interview with an Australian radio program, he confided to its audience that he was not proud of his son’s accomplishments. This seemed, at least in part, to derive from some sense that Elon himself was less than satisfied with where he found himself in his career and life at the moment.

Errol Musk has also been in the headlines for siring a pair of children with his step-daughter, Jana Bezuidenhout, who assumed the role of paternal parent when she was four years old.

How Does Elon Manage Being the CEO of Tesla and the Dad of 10?

Some of Elon’s past romantic partners, such as Talulah Riley, have gone on the record professing Musk’s devotion to his family. Riley was quoted “He tries to come home early for family dinners with me and the kids and maybe play some computer games with the boys.” At one point she described a household where nannies were deployed en masse but said that decreased over time.

Musk has admitted to being hands-off in the children’s life in the early years, suggesting that the mother has more involvement during those foundational years and that his contributions come a little later in their lives. Some notable exceptions to this self-imparted exile are trips abroad where all the children typically accompany him to visit places many only read about.

He also has been candid about the influence of the internet in the education of his children, specifically citing Reddit and Youtube during a 2021 Clubhouse interview as primary channels for their educational consumption. Ad Astra, a school Musk founded in 2014, was once located on the grounds of SpaceX and was the instructional hub for many children in his social hemisphere, including his own.

What Are Elon’s Plans to Continue to Grow the Family?

Errol Musk has encouraged his son to have as many as 30 children. The elder Musk has always espoused a manifest destiny approach to procreation among the wealthy elite, likening his son to sprawling lineages of European kings. A tweet from Elon in July glibly suggested that he may be in agreement with his father. The tweet said “Doing my best to help the underpopulation crisis. A collapsing birth rate is the biggest danger civilization faces by far.”

RELATED: Elon Musk’s #1 Tactic to Never be Afraid of Failure

This sentiment may not be as tongue and cheek as it appears. The hugely successful entrepreneur, despite some of his controversies, seems to be an ardent supporter of a greener planet as well as providing a real alternative habitat in the form of Martian terraforming. As wildly ambitious as that goal may be, Musk is a man who has attained the pinnacle of financial success by investing in the impossible.

Despite the challenges he has faced as a parent he has expressed a dedication to doing his part to battle against various existential threats that may extinguish humanity, and population growth is one of them. He has the resources to support a family of almost any size and while his desires may run deeper than narcissism. As with his other endeavors he may feel uniquely suited to solving a global problem and leading by example and in that lens, he is charitably leading by example.