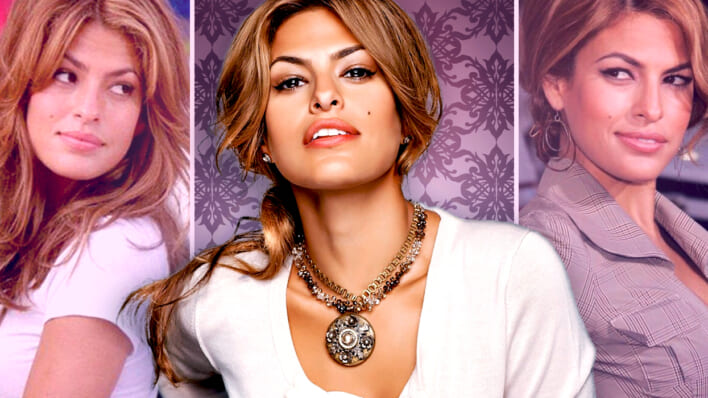 Eva Mendes Revealed Her Two Hollywood Dealbreakers – And a Dream Sequel… with Will Smith?

In 2020, Eva Mendes proclaimed she’d “rather be home with my man than anywhere else in the world.” But did she just tease a return to the screen?
By Barbara Pavone    May 30, 2022

In 2020, Eva Mendes proclaimed she’d “rather be home with my man than anywhere else in the world.” But did she just tease a return to the screen?

Eva Mendes and Ryan Gosling have been making fans swoon with their sweet love story for over a decade. The pair met on the set of 2011’s The Place Beyond the Pines and have been together ever since. In 2014, they grew their family with the arrival of daughter Esmeralda, then little sister Amada followed in 2016.

Over the years, they have chosen to keep their private life mostly under wraps, but what both actors have talked about is prioritizing family. Speaking with Good Morning America in 2016, Gosling gushed how heavenly being home is as a father. “It’s like walking through a field of flowers every day. I live with angels,” he enthused. It’s a notion Mendes echoed in 2020 when she proclaimed on Instagram that she’d, “rather be home with my man than anywhere else in the world.”

RELATED: What Drove Eva Mendes To Leave Hollywood Behind?

Indeed, Mendes has put her partner and children above all else. So much so that she hit pause on her acting career in order to devote more time and energy to parenting. As one source told Us Weekly, “Eva has programmed her entire routine and career to ensure family comes first — then work fits in around it.”

So, will she ever return to acting? Let’s take a closer look at Mendes’ approach to balancing life, love, and career.

How Eva Mendes’ Priorities Changed – And Why That’s Okay

Eva Mendes’ last acting gig was way back in 2014’s Lost River, but she didn’t leave Hollywood on bad terms. In fact, as Mendes told Entertainment Tonight in 2020, “Acting is something that I will always love.” The actor experienced something we all face: shifting priorities. As we grow and evolve as humans, it’s normal for our passions to do the same. What fulfilled you one day, may not fulfill you forever, and that’s perfectly okay.

As Mendes shows us, the key is to be open to such evolution and embrace it. Case in point: She didn’t think she’d ever become a mom, then everything changed. As she told Women’s Health in 2019, motherhood, “was the furthest thing from my mind” until “Ryan Gosling happened.” As she candidly explained, after falling in love with Gosling, “it made sense for me to have, not kids, but his kids. It was very specific to him.”

It’s a sentiment she honed in on during a 2020 appearance on the Fitzy & Wippa radio show. As she reiterated, Mendes “never wanted babies before I fell in love with Ryan.” However, when that happened and she was presented with the unforeseen opportunity to start a family, she wasn’t afraid to go for it, even if it meant changing her life around.

Mendes simply chose to see the positive in the situation and, as she noted on the show, the timing was actually perfect. She was in her early 40s at the time, so “it worked out in that way that I had a career and then I changed my focus to my family.”

Eva Mendes’ approach to balancing personal and professional success is truly healthy and seriously admirable. While she’s stepped away from acting, she hasn’t actually given up work because, as she told Entertainment Tonight in 2020, she’s “super ambitious.” What’s more, she’s all for taking risks and “loves the business side of everything.”

Indeed, just some of her many business ventures include founding an affordable beauty brand called CIRCA, launching a bedding line with Macy’s, and teaming up with New York & Company for a successful multi-year fashion collaboration that earned millions. She’s never stopped hustling and, most recently, she became co-owner of Skura Style (a line of kitchen cleaning tools) in 2022. All this she did without faltering on her top priority: motherhood.

However, despite her impressive ability to balance both, she doesn’t like being called a “supermom.” In fact, she’s adamant that joy and fulfillment come from within and that tuning out outside voices and pressures is key.

Mendes is all about staying true to yourself and doing what makes you happy, whether that’s focusing on parenting, on work, or a mix of both. As she told Entertainment Tonight, “You don’t have to want to be this, like, super mom, super mogul. I’m not and I’m really happy this way […] having an empire is not the goal for me.”

It’s all about chasing the life you want and it’s a point she underscored again on Instagram, writing, “I just want other women to know they can create their own paths that don’t require them to be moguls and have empires.” She then encouraged women to “relieve ourselves of that pressure and fight for what we want, not what society tells us we should want.”

As for what actually drives her, Mendes told Entertainment Tonight that she unapologetically chooses projects she finds fulfilling and likes, “following what my passion is at the time. My ambition shifts from this to that at different times and I think part of the message that I like to get across is that you don’t have to want to have everything,” she explained.

Will Eva Mendes Return to Acting – and What Are Her Hollywood Dealbreakers?

She hasn’t acted in nearly a decade, but as it turns out, Eva Mendes hasn’t written it off. The 48-year-old, who is perhaps best known for her roles in 2 Fast 2 Furious, Once Upon a Time in Mexico, and Hitch, told The View in 2022 that she is open to a comeback — on her own terms.

“Before kids I kinda was up for anything,” the actor admitted, saying she’s gotten much pickier about finding the right role. “I won’t do violence; I don’t want to do sexuality,” she said, noting, “I have such a short list of what I will do.” She even told Entertainment Tonight that she wouldn’t agree to “most of the movies I’ve done in the past.”

Mendes then joked that Disney is “all that’s left,” but added there is one film she’d immediately agree to. “You know what? It’s time for a Hitch 2,” she enthused. Of course, this was long before her Hitch co-star Will Smith tarnished his reputation with his now infamous Oscars slap of Chris Rock.

As Eva Mendes shows us, when it comes to setting goals, there’s nothing wrong with knowing exactly what you want and going for it. Rather than looking to the outside world for approval, it’s important to look inside and stay true to what brings you joy and fulfillment. Everyone is different and everyone’s definition of success is unique. While setting personal and professional boundaries isn’t always easy, especially if you feel you may be letting others down, it’s the healthy thing to do.

Only you can be the judge of what will make you feel empowered and happy and there should never be any shame in pursuing that.