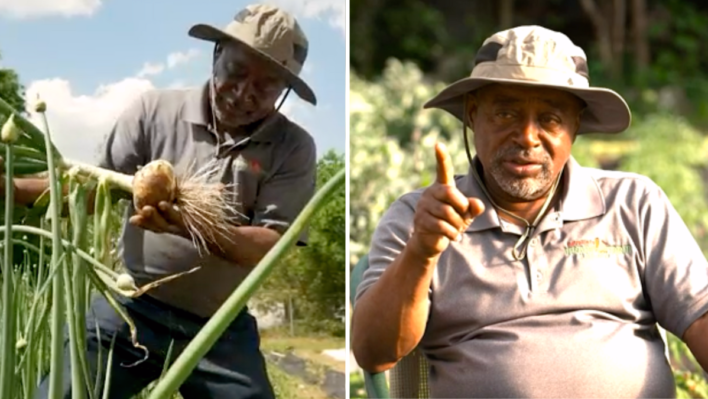 To combat rising food prices, one farmer and grandfather decides to take action in an organic way.
By Amanda Shaw    November 18, 2022

To combat rising food prices, one farmer and grandfather decides to take action in an organic way.

Bobby Wilson is retired. Well, he’s supposed to be. But the Georgia farmer used his retirement savings to buy a farm — the Metro Atlanta Urban Farm — and he hasn’t slowed down since.

Wilson is on a mission. He’s on several missions, actually. While working for the University of Georgia for twenty years in gardening education, he saw a real need for affordable, nutritious food in his underserved community in the Atlanta metropolitan area.

How One Farmer Is Combating Rising Food Prices

As food prices rise, the need has only increased. Families across the nation are feeling the pinch. It’s getting harder and harder for people to afford nutritious food. According to U.S. Hunger, one in ten households faces food insecurity. In Georgia, where Bobby Wilson lives, the problem is even more dire, with one in eight people facing hunger. It also happens to be an issue that disproportionally affects African American and Hispanic families.

So Bobby Wilson is on a mission to help families in his disadvantaged neighborhood grow their own food. At a time when thousands of households are struggling to make ends meet, Wilson insists that people can save thousands of dollars if they grow their own vegetables. And he has set up a teaching farm on five acres of land in College Park, in the heart of the city, to show people how to do just that.

“I’m trying to make sure that my people that live in and around these five acres, that we have access to locally grown food…I’m here to make a difference in their quality of life,” Wilson said.

But for this local farmer, accessibility to low-cost, healthy foods is just one piece of the puzzle. In addition to helping people eat better at a lower cost, he wants families to learn how to feed themselves. Wilson wants to empower the people in his disadvantaged community — and, in particular, the next generation — to grow their own fresh produce, free of synthetic pesticides and fertilizers. It’s a question of food security that extends to the health of the community.

“If we can eat better foods, stay away from the fast-food places, then any community can rid itself of the high blood pressure and diabetes that we are challenged with,” Wilson explained.

He welcomes anyone who wants to learn to come volunteer at the farm or attend one of their events. A farmer for well over thirty years, Wilson is eager to share his knowledge and experience with others. Not only does he show people how to grow their own vegetables, but also how to prepare them nutritiously.

How One Man Is Leaving a Better World for Future Generations

This farmer is very much aware of the economic situation in his community, too. The height of the Covid-19 pandemic was particularly rough. “When small and disadvantaged farmers didn’t have the avenue to get rid of that produce because people were not coming out to buy,” Wilson said, “we had an opportunity to help keep them alive.” And he did, by buying food from African American farmers and giving it away.

His community service initiative provided food for more than 25,000 struggling families in the area. And Wilson is still giving away food to families in need; his farm operates a healthy drive-thru option. He also continues to support farmers in his community by helping them apply for government incentives available to farmers.

The Metro Atlanta Urban Farm is a hub of activity. Students from preschool through high school come regularly for farm tours and STEM activities. Indeed, the younger generation is what inspires Wilson every day. His grandchildren and their future are always in the back of his mind.

“We’re more than just a farm,” Wilson insisted. “We’re about justice, equity, diversity, and inclusion because, at the end of the day, I want my grandchildren to have it better than what I have it today.”

And so he works hard to build up the community. Wilson’s “I Pledge Allegiance to the Environment” event is one of those opportunities to bring the community together, celebrate it, and work together for its future. Wilson says that, at the heart of it, the event is about the four R’s: reduce, reuse, recycle and rebuild. He adds that last one to stress the importance of rebuilding a community that was marginalized in the past.

Years ago, Bobby Wilson saw a need. He worked hard all his life, but when it came time to retire, he knew his job wasn’t over yet. So he poured his time, money and energy into stepping up to fill that need and combat food insecurity. He dedicated his life to helping his community — and to creating a healthier, more sustainable world for his grandchildren.