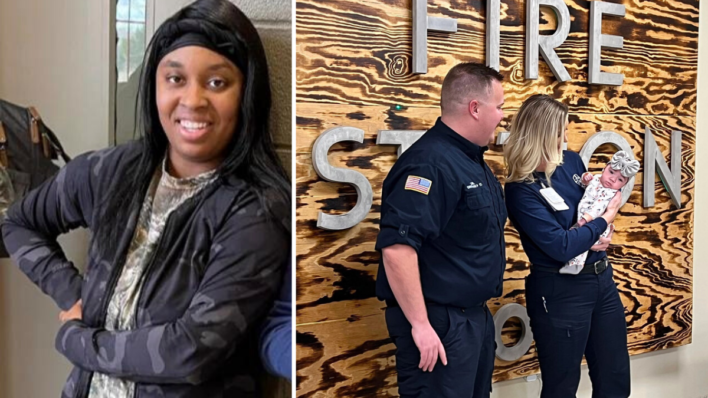 One woman was alone when she began to give birth prematurely, but a couple of first responders made sure both she and her baby were okay.
By Lindsey Staub    May 12, 2022

One woman was alone when she began to give birth prematurely, but a couple of first responders made sure both she and her baby were okay.

Fifteen weeks before her due date, Kitana Garrett went into labor. It was her first time giving birth, and no one was around. She began to panic.

In her home in Columbia, Tennessee, 23-year-old Garrett went into labor. Her partner was at work, but her labor progressed so rapidly that not only was he not able to make it to the hospital in time, but neither was Garrett herself.

She dialed 911, and thankfully, help arrived quickly. Cody Hill, a 10-year veteran of Columbia Fire and Rescue, arrived first on the scene. The first responders that followed him in were, according to Hill, “expecting the worst.”

Instead, when they entered the house, they found both mother and baby alive.

“[A fellow firefighter] looked at us and said, ‘She’s breathing,'” Hill told Good Morning America. “Everything had to kick in gear at that point.”

Most of the responders focused their attention on Garrett, but Hill headed straight toward the newborn. He bundled her up and raised the thermostat, knowing that the infant needed to be kept as warm as possible.

My whole entire hand probably fit from the top of her head down to her waist. She was no bigger than maybe a potato, is what it seemed like.

Additionally, he put a bag valve mask over the baby’s nose and mouth to keep her steadily breathing since her lungs weren’t fully developed.

Finally, paramedics arrived on the scene and took Garrett and her child in ambulances to the hospital. Among the emergency personnel was Jamie Roan, an EMT with the Maury Regional Emergency Medical Services.

“We put her on the monitor and realized that she had a fighting chance,” Roan said. “And as we did CPR and suctioned her, I felt her move her shoulder, and that’s when we were all just amazed by her. We all had a little hope and we got excited.”

For the remainder of the ride to the hospital, the whole crew was rooting for the baby.

We were talking to her the whole way to the hospital, saying, ‘Fight little girl.’

Hill and Roan stayed with the little girl at the hospital until they knew she was stable. After ensuring that the infant was safe with the doctors, Roan ran to meet the ambulance carrying Garrett. She had exciting news to share.

“I went outside and waited … and I jumped in the truck when she got there because I wanted her to know,” Roan said. “I was pretty excited to tell her.”

The news, of course, was that Garrett’s daughter was alive, safe, and fighting. “Jamie showed me pictures of her and told me that she was OK, that they did everything and she was a fighter,” Garrett said.

The Beautiful Surprise One Grateful Mom Gave to First Responders

The baby weighed one pound at birth and spent four months in the NICU. Now, seven months later, Garrett’s daughter is happy and healthy. Her mother named her Za’myla Camilla Miracle Garrett. Za’myla was recently baptized, and in attendance, among her friends and family, were the first responders who saved her life.

Since the birth of her daughter, Garrett kept in contact with Hill and Roan. Mostly they messaged each other on Facebook, but once, Garrett brought Za’myla to the firehouse to meet her saviors. At that visit, Garrett asked Hill and Roan what she had been waiting to ask for awhile now: Will they be Za’myla’s godparents?

RELATED: Woman Leaves Mysterious Bundle with Firefighters – What They Find Inside Changes Everything

“I was shocked and blown away,” Hill said. “Especially in the career that we have, you don’t ever really get feedback much from patients. We pick them up and treat them and drop them off…and we don’t hear a lot back.”

To Garrett’s excitement, they both said yes.

All I can say is thank you a million times, because they are a blessing God has sent. They didn’t give up, so I feel like they will continue do that later on in life [for Za’myla].

Because of two dedicated first responders, Garrett and Za’myla are alive and well. In the face of extreme pressure, both Hill and Roan rose to the occasion and saved not one but two lives. Hill and Roan are a reminder that kindness and support are necessary to our survival, so we must give it out freely.

lend a helping hand
“What people see you do may not be remembered; what they hear you say may be forgotten, but how they feel your intervention in their times of need will forever be remembered.” – Israelmore Ayivor