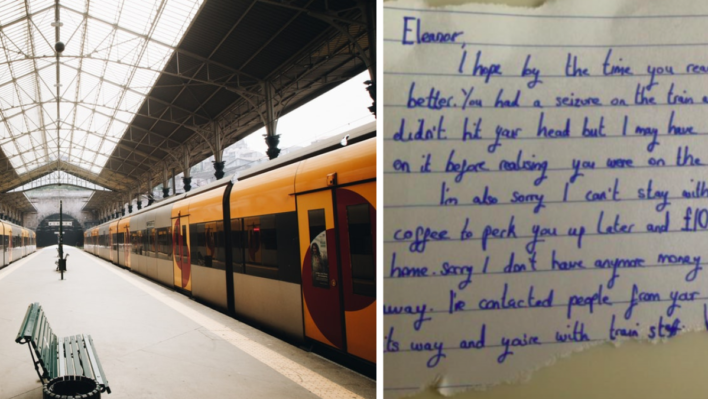 Fitness Instructor Collapses Suddenly on the Train — When She Regains Consciousness, Her Faith in Humanity Is Restored

She was holding two pieces of paper that would change her life.
By Sophie Babinski    January 21, 2023

She was holding two pieces of paper that would change her life.

When people are young and healthy, they feel invincible– like nothing can hurt them. Unfortunately, this false sense of security can be dangerous, and leave people without any safety net when things go wrong.

This happened to a young woman in Britain recently when she lost consciousness on public transit. Luckily, a good samaritan was there to save the day.

She Was on the Train When It Happened

Ellie Farnfield, a 27-year-old fitness trainer from London, was heading to work on the train. Everything seemed normal, she felt good and was anxious to get to her destination.

Ellie’s choice to take the train to work was a practical one, as it cut her commute in half compared to driving. However, many other commuters had the same idea, and her train was packed.

RELATED: 61-Year-Old Homeless Man and His Wife Risk Freezing to Death During the Winter – So, Fourth Graders Build Them a House

Nevertheless, she squeezed into the traincar and found a spot, standing. Not long after her trip started, an unfamiliar sick feeling washed over her.

First, she felt nausea, followed by a splitting headache, a dry mouth, and tingling extremities. Then, everything went black.

The Notes She Found in Her Hand Inspired Her

When Ellie came to, she was totally disoriented. She didn’t know where she was, or how long she had been unconscious. She quickly realized she was lying on her back on a bench, with her fist tightly closed over two pieces of paper.

She anxiously felt around for her purse, afraid she’d been attacked, mugged, or worse. However, she found that all of her belongings were where they were supposed to be. She checked her phone and saw dozens of missed calls, both incoming and outgoing. She opened her hand, and saw a crumpled up note and a £10 bill.

RELATED: Beloved Teacher Battling Cancer Rests at Home – When Police Show Up at Her House With a “Citation”

The note said: “‘Eleanor, I hope by the time you read this you are feeling better. You had a seizure on the train and I took you off. You didn’t hit your head but I may have hurt your leg as I walked on it before realizing you were on the floor having a fit! Sorry! I’m also sorry I can’t stay with you now, but here is a coffee to perk you up later. And £10 to make sure you get a taxi home. Sorry I don’t have any more money so I hope you don’t live far away.”

The note was signed ‘Love, Tom’. Ellie saw that there was in fact a coffee next to the bench. She was relieved to know that help was on the way and that she’d been taken care of by such a kind stranger.

The event inspired Ellie. Already a positive person, Ellie was even more encouraged by the mysterious Tom’s act of kindness. She became preoccupied with the idea that she could find her protector and thank him in person.

She made many social media posts about the incident, asking him to reach out to her, but he never did. It was clear that the elusive “Tom” wanted to stay anonymous. Still, Ellie felt she may owe Tom her life!

One would hope that every person who witnesses a scary or traumatic thing happening to a stranger would jump in and help.

However, that is usually not the case. Good samaritans are few and far between, so when we find them we must always express our gratitude. Tom may not want to be found, but he should know just how grateful we are that people like him exist on this earth.