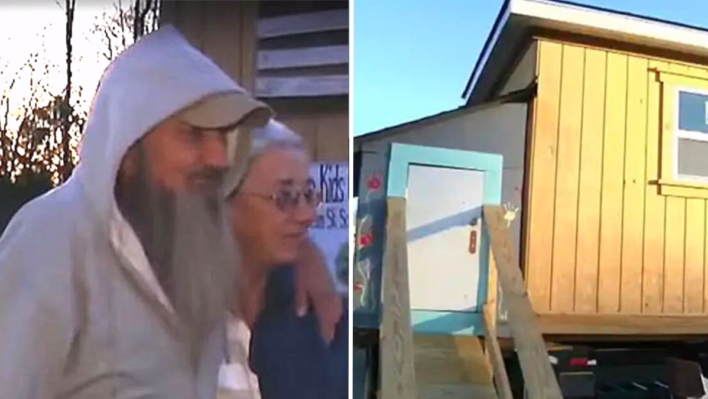 61-Year-Old Homeless Man and His Wife Risk Freezing to Death During the Winter – So, Fourth Graders Build Them a House

A group of fourth graders are changing lives, one tiny house at a time.
By Heidi Hamm    January 20, 2023

A group of fourth graders are changing lives, one tiny house at a time.

61-year-old Navy veteran, Eddie Browning and his wife, Cindy had fallen on hard times. They were living in a broken-down camper when it was partially destroyed by a fire. Unable to afford repairs, the couple were at risk of freezing to death during the long, cold winter nights in their hometown of Norwood, Georgia.

Their only recourse? To pray for a miracle.

Well, turns out, miracles really do happen. Although, in this particular case, help came from a very unlikely source.

After being inspired by a class project on tiny homes, a group of compassionate fourth-graders from Elm Street Elementary in Rome, Georgia, decided to do something big to help the homeless…in the tiniest of ways.

The Tiny Tots With Big Hearts Build a Tiny House

Their plan was an ambitious one — they were going to build a house. As they were only nine-years-old, their experience building homes was, well, zero. So what do you do when you don’t know how to do something? Google it, of course.

With the help of their teacher, the support of the school administration, and armed with instructions on how to build a foundation, frame a house, and construct a roof that they got off the internet, the kids got to work.

They built a simple wooden structure on wheels, with a window and a door, and handpainted the outside with colorful flowers using their own handprints. They also furnished it with sleeping bags, various supplies, and a heater.

However, as is the case with almost any construction project, the kids ran into a roadblock. Once they finished it, they had no where to put it.

Heartbroken, they thought that this was the end of their dream. But as the saying goes, if you build it, they will come. And come they did.

The Students’ Tiny House Was Destined for Big Things

Thanks to the power of social media, word got out and a whole lot of people reached out to the school offering to help make the children’s dream a reality, including John Kernohan with the United Tiny House Association.

Kernohan wrote an email to the school, explaining that the UTHA held a tiny house festival in Eatonton, Georgia and they wanted to come get the house. The group wanted to make some upgrades and use it as part of a house they were donating to a homeless veteran, namely Eddie and his wife.

RELATED: Beloved Teacher Battling Cancer Rests at Home – When Police Show Up at Her House With a “Citation”

With help from numerous corporate sponsors, donors and volunteers, the house, complete with an addition, was finally ready.

Thanks to a large addition, the now-248 square foot tiny home had everything the couple could ever need, including a full bathroom, kitchen, electricity and plumbing. The original structure was turned into a second bedroom.

Twelve of the Elm Street Elementary students helped gift the home to the veteran couple at the Eatonton Georgia Tiny House Festival.

At a loss for words and overcome with emotion, Eddie simply said of the home, “[This] will be warm. We’ve been freezing to death.”

Helping Those in Need One Tiny House at a Time

This is just the beginning. Elm Street Elementary officials say the school now plans to build a tiny house every year for a needy family. They even have a business name, Elm Kids Construction.

“They are so capable,” she told the local press. “Never underestimate the power of an idea. By exploring their ideas, they have changed someone’s life forever.”

And never underestimate the power of tiny things. Sometimes, it’s the smallest things that really do have the biggest impact.