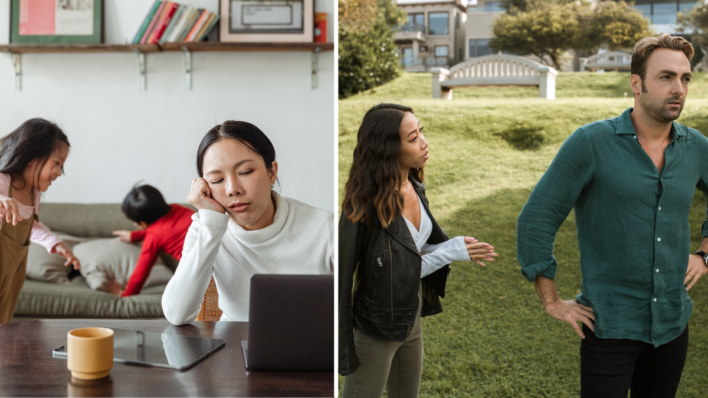 One ungrateful husband received a fitting reply from strangers when he spoke about his wife’s request to them.
By Bryan Liquor    October 10, 2022

One ungrateful husband received a fitting reply from strangers when he spoke about his wife’s request to them.

It doesn’t take a news piece revealing their rich, real-life dollar value for men to know the priceless — and often thankless — role that stay-at-home mothers play. In many ways, they’re the glue that holds the home together.

Yet that message didn’t stick for one tone-deaf husband, and you have to read it to believe it.

Why One Husband Had a Problem With His Wife’s Request

Taking to Reddit’s AITA forum, he aired out his issue: His wife who was also a stay-at-home mom had the gall to ask for a little thanks.

He said that by speaking up, she had ruined a smooth setup of her watching their two-year-old twins day and night, while he’s the breadwinner.

“Recently, she has been coming to me and saying that she feels burned out, unappreciated and taken for granted,” he wrote.

RELATED: Mom Faces Backlash for Making Daughter Sign a Lease and Pay Rent to Live at Home – She Has the Best Response

And just what did she demand? She said a nice gesture now and then — like buying her favorite chocolate bar — would be nice. Apparently, that was too much.

While he posted that he understands where she’s coming from, he added, ‘we both get on with our respective roles,’ and mocking that ‘I get on with my job because I have to provide for my family whereas she wants presents and treats for doing her job.’

If support for his plight is what he expected, he was definitely wrong.

Redditors quickly came to the wife’s defense while dumping on her husband. One reminded him that unlike his wife, he gets plenty of love for all he does at the office.

RELATED: Woman Notices Young Mom And Her Daughter Eyeing Food At Costco – What She Does Next Is Unexpected

“I’m certain he gets ‘appreciation’ from work, his higher-ups notice what he does, the clients and co-workers he works with thank him and recognize him. His wife has no one but him to acknowledge her. She gets no raises, no promotions, no one is hiring her a helper or assistant.”

Another put things more bluntly. “She isn’t your 24/7 on-call employee, OP. You’re still supposed to help her after you get home. No wonder she feels unappreciated.”

Ask, and you shall receive.

How an Ungrateful Husband Reminds Us to Appreciate Our Partners

After licking his wounds, the husband got the point. “I do get to relax at the weekend whereas my wife usually does her normal routine and gets on top of the cleaning etc.,” he wrote.

“I say thank you all the time but I understand that this may not be her love language.”

To be fair to the husband, not everyone is great at sharing their feelings. However, when it comes to having success in love, it takes more than just communication skills. It takes active listening, empathy, and action.

RELATED: Stranger Watches Single Mom With Her Kid On A Train – Then, Hands Her A Note About Her Parenting

In this case, the husband dropped the ball on all three, and left his wife feeling all alone. Let’s hope that the silver lining to this is that the husband wakes up and realizes that it isn’t just about roles, it’s about respect.

When it comes to saying thank you, it doesn’t take much to show a lot. How will you make your stay-at-home spouse feel special?