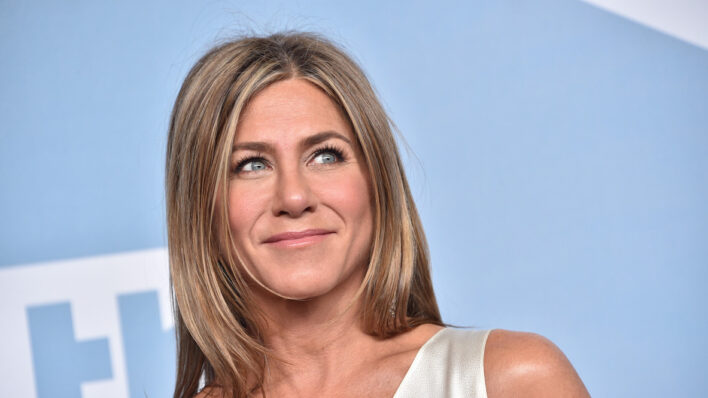 How Jennifer Aniston Got Past Her Toxic Relationship With Her Mom

Jennifer Aniston is the picture of a happy and fulfilled woman but this wasn’t always true in her life. Her relationship with her mother, Nancy Dow, was far from perfect and taught her a lot about dealing with anger and stopping generational trauma.
By Aly Walansky    April 14, 2020

Jennifer Aniston is the picture of a happy and fulfilled woman but this wasn’t always true in her life. Her relationship with her mother, Nancy Dow, was far from perfect and taught her a lot about dealing with anger and stopping generational trauma.

Jennifer Aniston became a household name in the 1990s, starring in the biggest TV sitcom of the decade and at the time married to one of the biggest movie stars on earth.

However, as much as we got to know her, a lot of the painful details of her past have remained unspoken. Yet, just like the good events in her life, they’ve also brought her to where she is today.

Jennifer Aniston grew up having a complicated relationship with her mother, and that has influenced her perspective on life, having kids and motherhood.

Her mother wanted her to be perfect

Aniston’s mom, Nancy Dow, was a model and actress who starred in TV shows like “The Beverly Hillbillies” and “The Wild Wild West.” She died in 2016 at the age of 79 after suffering two strokes in 2011 and 2012.

From a young age, Aniston witnessed the breakup of her parent’s marriage, and it was emotionally draining for her. At only 9-years old, she was left alone with a mother who was difficult to deal with.

Growing up with her mother was a trial indeed. Nancy’s life in front of the cameras had distorted her standards–she wanted perfection at all times from her daughter.

She was from this world of, ‘Honey, take better care of yourself,’ or ‘Honey, put your face on,’ or all of those odd sound bites that I can remember from my childhood.

This fixation on her daughter’s appearance was no doubt residual from the industry Nancy had spent most of her life in. “She was very critical of me. Because she was a model, she was gorgeous, stunning. I wasn’t,” Jennifer told The Hollywood Reporter.

But Nancy was even more toxic

BNancy’s behavior didn’t stop at critical comments on her daughter’s appearance. It also extended to other forms of toxic behaviors Jennifer had to endure. “She was also very unforgiving. She would hold grudges that I just found so petty,” Jennifer revealed, a quality that she certainly did not inherit.

But Jennifer recalls the one moment in her relationship with her mother that marked her forever. Nancy had a temper, something Jennifer could not identify with.

I was never taught that I could scream. One time, I raised my voice to my mother, and I screamed at her, and she looked at me and burst out laughing. She was laughing at me [for] screaming back. And it was like a punch in my stomach.

Eventually, it became too much for Jennifer to handle. Aniston and Dow’s rift reportedly began in the 1990s and intensified after the late actress wrote a book about her daughter and their estrangement, called From Mother and Daughter to Friends: A Memoir.

The two apparently didn’t speak for a decade and only reconnected after Aniston split from Brad Pitt in 2005.

With time, Jennifer developed perspective and realized her mom was always just trying her best. She couldn’t help her worldview, especially since she had lived through a similar upbringing with her own mother. “She did it because that was what she grew up with,” Jennifer concluded.

My mom said those things because she really loved me. It wasn’t her trying to be a b–ch or knowing she would be making some deep wounds that I would then spend a lot of money to undo.

But breaking generational trauma did not come without a cost. Jennifer had to work on her own issues and extracted her learnings about what kind of life she wanted to lead for herself.

Jennifer was passive-aggressive too

Growing up with Nancy left its fair share of trauma on Jennifer, but she chose to “use what I grew up with as an example of what I do not want to be or live in.” And this may explain why she is so happy today, despite what society may think of her being single and never having had children.

The main thing she has learned was to moderate her urge to be always in control. Yes, Nancy had a hot temper and consequently, Jennifer had a longtime history of being “passive-aggressive.”

After her parents’ divorce and moving out of her mother’s house was also her first step towards finding another kind of family–one shaped by the friends she chose. Her friends became as important to her, if not more, as family members.

Unlike Nancy, Jennifer does not hold grudges. In fact, she is big on forgiveness and allowing people to have a second chance.

Indeed, as seen from her lasting friendship with Brad Pitt, despite their heavy past, and his cheating on her, Jennifer proves that her capacity for forgiveness is vast.

In the Netflix movie Dumplin‘, life cane full circle as Aniston plays a mother who is hard on her child. She plays Rosie, a former beauty queen who has a complicated relationship with her daughter, who is overweight. That relationship is tested when her daughter decides to enter the local beauty pageant.

Jennifer channeled a lot of her real-life experience in the way she approached the role. Her real own experiences with Nancy helped her better understand her character of Rosie from Dumplin‘. In the movie, Jennifer plays a former pageant queen with a young daughter. A lot of the movie’s core relationship between the daughter and mother mirrors Jennifer’s past.

One of the reasons I really loved the mother-daughter aspect of it was because it was very similar in a way to what my mother, and our relationship, was. She was a model and she was all about presentation and what she looked like and what I looked like.

Jennifer Aniston to The Sunday Telegraph

What Jennifer teaches us about happiness

Jennifer’s happiness is an affront to the more traditional expectations set on women. As a society, we have attached so much of our happiness on concepts such as being in a great relationship or having children. The truth is, this isn’t true of all women.

What brings me happiness? I have a great job. I have a great family. I have great friends. I have no reason to feel otherwise. If I did, I would need to go get an attitude shift, a perspective shift.

Having grown up in an environment that was toxic, witnessing her parent’s divorce and living through her mother’s constant criticism, has had a strong bearing on Jennifer’s conception of happiness–but it doesn’t dismiss its validity.

Jennifer proves that generational trauma does not have to continue. You can be the one to stop it. All it takes is for you to make that decision.