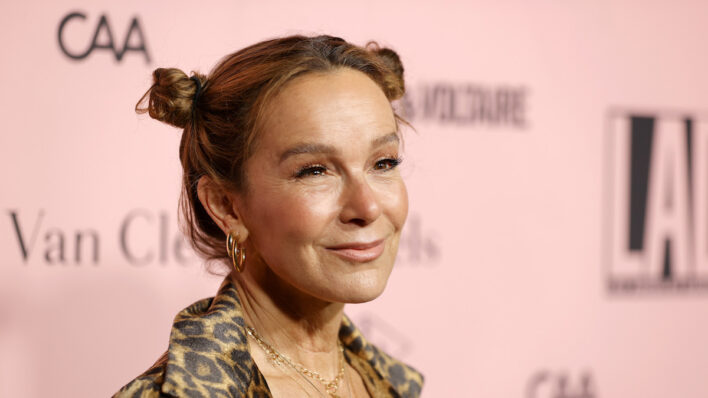 What Happened To Jennifer Grey? The ‘Dirty Dancing’ Star Who Disappeared

She was the most exciting rising star in the industry, destined to be an A-list actress. What happened that turned the public against her?
By Shaoni Das    October 28, 2021

She was the most exciting rising star in the industry, destined to be an A-list actress. What happened that turned the public against her?

It’s always exciting to see the meteoric rise of a personality— they’re dominating the pop culture conversation, their faces are selling magazines, they’re earning accolades left, right, and center— but the gradual descend is far less sensational. You just wake up one day and realize that you haven’t seen a particular celebrity in a while; in fact, you realize you haven’t even thought of them in a while. They disappeared from your consciousness so stealthily you never had a second to examine what occurred.

Jennifer Grey is one such actress whose decline from fame caught everyone by surprise, especially those who had enthusiastically followed and consumed 80s media. She soared into the stratosphere with back-to-back roles in Ferris Bueller’s Day Off and Dirty Dancing, arguably two of the most iconic features of the decade. Her future was looking bright, with tons of thrilling, lucrative projects on the horizon. Everything was laid out for her to seize the moment and become a superstar.

Then occurred a devastating incident that sent her career in a totally unexpected direction.

A car crash that triggered years of “survivor’s guilt”

On August 5, 1987, Jennifer Grey and her boyfriend and Ferris Bueller’s Day Off co-star Matthew Broderick were involved in a fatal car accident in Northern Ireland. Their car careened into the opposite lane and rammed into incoming traffic: a car driven by a local mother and daughter, Margaret Doherty and Anna Gallagher, who were instantly killed upon impact. Matthew Broderick was charged and convinced of reckless driving. Jennifer, meanwhile, suffered from severe whiplash, resulting in broken ligaments in the back of her neck. The injury took a long time to heal — it led to chronic headaches and spasms in the neck area that were triggered by any kind of shoulder movement.

Moreover, Jennifer reported a tragic case of survivor’s death over the death of Margaret and Anna from the other car. Her film Dirty Dancing premiered just nine days later, but Jennifer was in no mood to promote her latest motion picture, even though it promptly became one of the most successful movies at the box office. She felt guilty, she felt ashamed, she felt like she wasn’t worthy of being on the planet at the expense of two completely innocent women. A combination of “deep sorrow, the survivor’s guilt, and then being celebrated as the new big thing” contributed to her agony. “It didn’t feel good to be the toast of the town,” she told Sunday People.

She withdrew from the spotlight at age 27 and decided to deal with her emotional affliction on her own terms – without industry pressures haranguing her at every turn.  Her heart wasn’t in the nitty-gritty of show business anymore, and her ambition was dwindling. It was time to say goodbye for a few years.

A maligned comeback involving a “nose job from hell”

However, Hollywood is an impossible place to navigate as a woman. You only get a few chances, so if you miss your train the first time, the chances are that you won’t be able to board the next one. Jennifer Grey waited years to launch her comeback, so when it did happen, it didn’t land smoothly at all. To put it bluntly, it was a veritable disaster.

In 1995, Jennifer Grey was announced as a guest star in an episode of Friends. The series’s devoted audiences were hotly anticipating Jennifer’s appearance, but upon seeing her on their screen, they couldn’t believe their eyes: she looked totally different. This wasn’t the same Jennifer they’d admired and fawned over during her Dirty Dancing years, and some fans felt betrayed. The actress’s rhinoplasty procedures were to blame for her facial changes. “It was the nose job from hell,” she said.

What’s bittersweet is that Jennifer’s pre-surgery nose was actually distinctive and made her unique from her peers — it was adorable, it was memorable, it was her signature body part. However, she didn’t want to be singled out due to her nose, so she did what many famous people have and continue to do: go under the knife. The first nose job was such a blunder she had to get another procedure done to mitigate the mess. The end outcome was a drastically dissimilar configuration from the one she’d started out with.

It instantly made her into an objection of humiliation among the industry’s inner circles and tabloid stories. “I’ll always be this once-famous actress nobody ­recognises because of a nose job,” she told The Mirror. In her words, she went into the surgery room as a celebrity but came out “anonymous,” losing her visual identity in the process.

It was the nose job from hell. I’ll always be this once-famous actress nobody ­recognises because of a nose job.

What happened to Jennifer is not unlike what’s happened with many female personalities of yesteryear: Lil Kim, Renee Zellweger, you name it. The mainstream media is obsessed with punishing women for looking different, but at the same time, it has no qualms about perpetuating plastic surgery as though it’s a magical fix that can solve all problems. We shouldn’t be surprised when women succumb to society’s impossible beauty standards and seek cosmetic treatment; they’re tired of having their flaws pointed out to them.

The conversation shouldn’t be about whether specific women have altered their faces – who does this affect at the end of the day? The central issue is that women are undergoing permanent, possibly dangerous transformations in the name of beauty. Plastic surgery involves many serious risks, not the least of which is your career longevity. You can’t control how you come out on the other side, so the best practice is to educate yourself to the nth degree before making this life-changing decision.

Today, Jennifer Grey is at peace. She has a wonderful daughter, a thriving career in television, a Dancing with The Stars winner’s medal under her belt, and consistent financial security from her Dirty Dancing days. Most importantly, she is happy where she is and wouldn’t change anything. “I’ve made changes in my life when I realized I don’t want to live a certain way anymore. So I’ve eliminated people from my life because they’re too negative,” she said.

Practice kindness every step of the way

The lesson should be about being careful when judging someone due to their appearance; you don’t know their story, their insecurities, their anxieties, their hopes, their fears, and everything in between. Everybody is concerned with looking beautiful, so a single comment could quite literally destroy someone’s career and self-confidence. Everyone’s features change over time, whether it’s a natural progression or a deliberate adjustment, so instead of questioning these changes, we should embrace them and learn to practice self-love as much as we can.

Jennifer Grey would be a world-class actress had her career not suffered over the reaction of her nose job — we, as a collective, should have never gotten out our pitchforks for this cause. It’s her business and no one else’s, so let’s be kind to the people we see on our screens and those we encounter in everyday life.