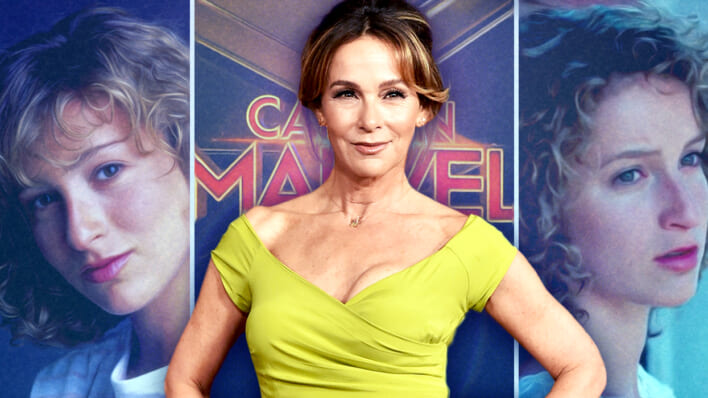 Thirty-five years after her Dirty Dancing character refused to be a wallflower, Jennifer Grey is finally “out of the corner” and living her best life IRL.
By Maya Khamala    May 23, 2022

Thirty-five years after her Dirty Dancing character refused to be a wallflower, Jennifer Grey is finally “out of the corner” and living her best life IRL.

Jennifer Grey may not be a name that is necessarily recognizable to young movie fans today — unless, of course, they happen to be fans of Dirty Dancing, the beloved 1960s romantic dance drama that captured the hearts of millions when it was released back in 1987.

RELATED: What Happened To Jennifer Grey? The ‘Dirty Dancing’ Star Who Disappeared

Grey, who played the role of Frances “Baby” Houseman, was the crown jewel at the centre of that timeless classic. Appearing opposite the late Patrick Swayze, the pair took America — and the world — by storm.

“After Dirty Dancing, I was America’s sweetheart, which you would think would be the key to unlocking all my hopes and dreams,” Grey, 62, writes in her memoir, Out of the Corner, which came out earlier in May 2022. “But it didn’t go down that way.”

“Nobody puts baby in the corner.”

The phrase is instantly recognizable to those who have seen Dirty Dancing. It refers to the journey that Grey’s character, Baby, must travel to go from having her talent — and her desire — suppressed, to feeling empowered enough to express it fully, and even show it off. Ultimately, Baby’s journey is one that enables her to blossom into her best self, in spite of all those who would keep her in the proverbial corner.

But, because of her relative obscurity after that film, and other blockbusters, like Ferris Bueller’s Day Off, fans have often wondered how Grey went from breathing such authentic exuberance into her characters’ journeys — particularly Baby’s self-discovery — only to find herself “banished” from her real best life.

Contrary to the storied pair of nose jobs she got in the early 1990s, which rendered her infamously unrecognizable and “shunned by Hollywood,” Grey would be the first to tell you that her nose was never the root of the problem.

Grey uses her memoir as a tool to revise her own story, exploring childhood lessons on beauty standards, among many other salient themes, and inevitably drawing the conclusion that her “banishment” wasn’t due to anything she did wrong (nose job included). Rather, it was precisely her obsession with where she went “wrong” that caused her to shrink into a corner.

“I spent so much energy trying to figure out what I did wrong, why I was banished from the kingdom,” she says. “That’s a lie. I banished myself.”

In what Grey herself has since dubbed a “schnozzageddon,” she appeared in public for the first time after her second rhinoplasty, only to find that Michael Douglas failed to recognize her, and so did many of her peers and fans. This prompted the young actress to descend into a narrative of panicked invisibility.

“I went in the operating theatre a celebrity – and came out anonymous,” she said of her rhinoplasty in past interviews. “In the world’s eyes, I was no longer me,” she continued in another chat.

Feeling her rhinoplasty was a mistake, Grey also said, “I was so upset with my mother for always telling me I should do my nose. I really thought it was capitulating… I just thought, ‘I’m good enough. I shouldn’t have to do this.’”

In her memoir, Grey, who is Jewish, recalls that after Dirty Dancing, there was still not “a surplus of parts for actresses who looked like me.” She was apparently told that her nose was “a problem,” and her mother encouraged her to get corrective surgery as a pragmatic way of dealing with Hollywood’s anti-Semitic beauty standards. In fact, her parents, who were also actors, both had nose jobs, as well.

Nine days before the premiere of Dirty Dancing, Grey and her then-boyfriend, Matthew Broderick, were involved in a catastrophic car crash while vacationing in Ireland. The accident proved fatal to the two women in the other vehicle.

Dirty Dancing was released just weeks later, thrusting Grey into stardom. But her grief over the accident, along with a sense of survivor’s guilt, stopped her from fully enjoying her success, and led her to step back from acting for a while.

But post-accident anxiety and depression were not the only struggle Grey faced after Dirty Dancing. The crash left her with chronic neck pain, from which she suffered for 20+ years. It wasn’t until she was asked to compete on Dancing with the Stars in 2009 that she met with a neck pain specialist who persuaded her to undergo a life-changing surgery, which finally allowed her to shake off the effects of the car crash… and learn to dance again.

RELATED: Jamie Lee Curtis Opens up About Big Regret With Plastic Surgery, and It’s an Important Lesson for Everyone

Ultimately, Jennifer’s story has a lot to teach us about how anxiety and depression — regardless of their cause — can be isolating, distracting and rife with self-blame.

No matter how you feel about plastic surgery, it’s worth noting that it was an injured, anxious and impressionable Jennifer Grey who believed a nose job would improve her career. But the cosmetic procedure could never have rid her of the internal struggles she was facing. Instead, it may have exacerbated them.

“I think that when you ask other people who you are and you ask people to love you and you take their opinion as a definition of your worth, it’s a slippery slope, man,” shares a wiser Grey today.

Today, Grey is finally learning to walk outside of her own shadow, just like Baby did all those years ago. She’s owning her life and it’s much more rewarding in real life than it is onscreen.

As a mother of one adult daughter, a divorcée, and a recently published memoirist, she’s finally at peace with who she is. In fact, she wants to take up as much space as she possibly can. She’s even working on a possible Dirty Dancing sequel.

“That’s a new feeling,” she says, “to take myself out of the corner — and to recognize that I have been putting myself there, through story, through narratives that weren’t giving me the best life. The story I was telling myself about how I got here was not a great story. And not entirely true. I hadn’t seen the ways in which I’d made choices.”

“I believe in my heart that the second half of a woman’s life is the best half,” she adds.