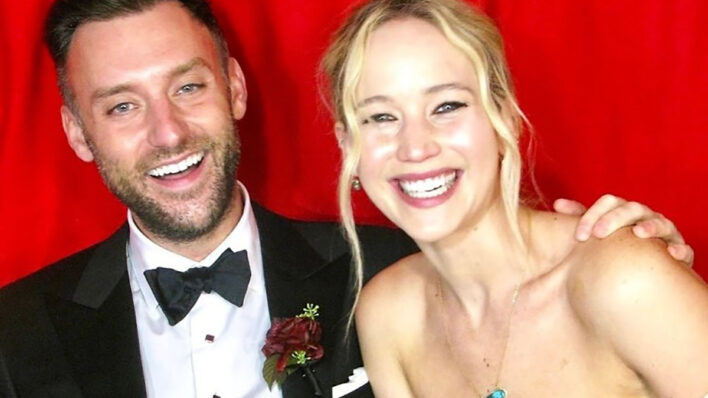 Jennifer Lawrence’s recent marriage to Cooke Maroney after her year of self-discovery is a tale of love finding you when you least expect it.
By Barbara Pavone    October 25, 2019

Jennifer Lawrence’s recent marriage to Cooke Maroney after her year of self-discovery is a tale of love finding you when you least expect it.

There are a lot of sayings about finding true love when you least expect it or when you’re not searching for it and it is easy to dismiss them all as clichés. However, there is truth to them and Jennifer Lawrence is proof of that.

In November 2017, the Oscar winner split from director Darren Aronofsky (who was 21 years her senior) after 14 months of dating because, according to sources, they were “at different places in their lives.”

She had decided to take a break from acting, and from chasing love — “I definitely wasn’t at a place where I was like, ‘I’m ready to get married,’” she told the Naked with Catt Sadler podcast.

That is when she unexpectedly met her husband. Her story is proof that you cannot control the timing of all life’s milestones.

In the spring of 2018, Jennifer was introduced to Cooke Maroney, an art director, by her best friend, Laura Simpson. They had an instant connection. Although the pair managed to stay out of the spotlight, a source confirmed to Page Six in June 2018 that the relationship had been “going on [for] a few weeks.”

When asked to elaborate on what made her certain they were right for each other, the Hunger Games actress explained:

I started with the basics. How do I feel? Is he nice? Is he kind?

“This is the one, I know that sounds really stupid but he’s just, he’s — you know. He’s the greatest person I’ve ever met,” Jennifer continued, “He really is, and he gets better.”

In addition to their obvious attraction, Jennifer’s passion for acting is perfectly aligned with Cooke’s love of art.

Her new husband pushed her out of her comfort zone

In addition to all of their common interests, Lawrence and her beau also share a drive to succeed.

Cooke Maroney may not be a household name, but his career is just as impressive as his famous spouse’s. The Gladstone Gallery where he works represents such prestigious artists as Carroll Dunham (as in Lena Dunham’s father), Richard Prince, Anish Kapoor, and Ugo Rondinone. On top of that, he’s worth an estimated $25 million, according to Metro UK, which is nothing to scoff at, even when compared to the actress’ $130 million net worth.

What’s more, the lovebirds also push each other to be better versions of themselves. Speaking about her decision to take a yearlong break from acting in 2018, Jennifer revealed it was a life-changing experience, not in the least because Maroney forced her out of her comfort zone.

She told Naked, “I met somebody, I fell in love, and I started a new life in New York.”

Jennifer elaborated on her new life: “I have been doing things that I didn’t actually think that I could […] I’d get nervous before going to restaurants, or I felt like I couldn’t go to dive bars. There were just certain things, like, ‘Oh, I can’t do that.’ And then the past year, I’ve just been doing all of that. And I feel like my life is more well-rounded because I took time off.”

Jennifer may not have been thinking about marriage in early 2018, but that quickly changed when she met Maroney, as she confessed to Entertainment Tonight: “He’s just the best person I’ve ever met in my whole life. It was a very, very easy decision.”

And so, after less than a year of dating, the couple got engaged in February, then tied the knot in October 2019.

Like much of their courtship, the nuptials remained under wraps, but People was able to confirm that the ceremony took place at the lavish Belcourt of Newport mansion in Rhode Island. Around 150 guests were in attendance to share their special day, including a slew of A-list stars, like BFFs Emma Stone, Bradley Cooper, and Adele.

Why the rush? According to Jennifer, she saw no reason to wait because she knew their bond was right.

Calling Maroney her “best friend,” she told Naked, “I want to legally bind him to me forever. And fortunately the paperwork exists for such a thing. It’s the greatest. You find your favorite person in the planet and you’re like, ‘you can’t leave.’”

Be ready for love when it finds you

Jennifer Lawrence’s story is a powerful reminder that the right connections often find you when you least expect it. While at the prime of her career and moving on from a high profile breakup, she was still bold enough to embrace love without reservation. All it takes is for us to be receptive and take that fateful jump when it feels right.

Which might just be the most important lesson of all: Even if you’re not searching for it, when love finds you, be bold enough to embrace it without reservation.