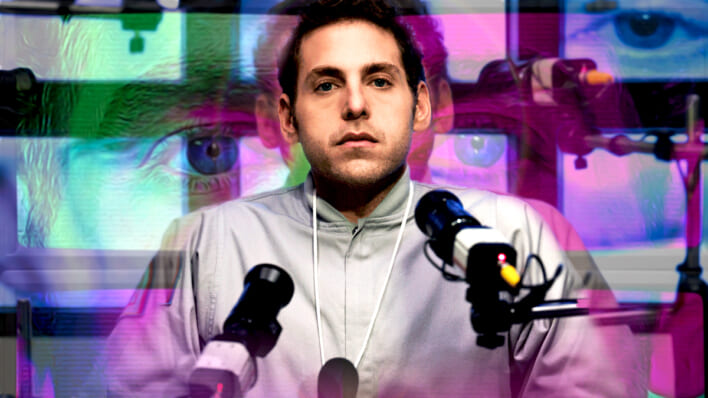 Jonah Hill grew from coming-of-age teenage comedian to full fledged comedic actor and filmmaker. So what has made him suddenly step away from the limelight when everything was going his way?
By Jeff Liddell    September 22, 2022

Jonah Hill grew from coming-of-age teenage comedian to full fledged comedic actor and filmmaker. So what has made him suddenly step away from the limelight when everything was going his way?

Jonah Hill Feldstein, who professionally only goes by his given and middle names, has cemented a vulgar but decidedly comedic legacy. Alongside Seth Rogen and Michael Cera, with whom he co-starred in Superbad, the American actor’s public image revolves around nerdy irreverence. Not only are the actor’s most successful works and most beloved performances connected to this worldview of raunchiness and finding the funny side of things, but it seems to have affected his relationship with the media and his fans.

RELATED: How to Overcome Social Anxiety With This Four-Step System

That being said, no one, not even celebrities, is exactly like what their attitude with other people implies. This includes Jonah Hill himself, who is distancing himself from the image that was cemented in the late 2000s and early 2010s, but only recently made some firm decisions during the promotion of his documentary, Stutz.

Hill recently revealed the troubles that come with anxiety attacks and being a famous actor and filmmaker. He has received positive attention for opening up about his mental health, but what it truly reveals is the effects of fame on even the truly wealthy and successful.

The actor has dealt with debilitating anxiety attacks for over 20 years and states that he will no longer promote his new movies, in order to save his own mental health.

Society as a whole expects people to looks like a certain way even with the evidence that people are naturally prone to physical diversity, and Hollywood is arguably the guiltiest party, at least within American culture. When he first became famous, Jonah Hill did not look like a stereotypical model, but due to his association with comedies, the alienating set expectations of being fit and good-looking likely did not originally affect him. However, in 2011, Hill showed up after having lost weight, and a decade later, he requested his fans not talk about his body image anymore.

RELATED: How to Get Toned Like Megan Thee Stallion: Her Diet, Workout Routine, and Weight Loss Journey

Due to his characterization of the comments as “unhelpful”, descriptors of Hill’s physical appearance likely contributed to his anxiety and his weight loss in 2011, showing that frequent praise about a specific thing can have negative effects on even famous people. The fact that Hill claimed to have lost weight in order to get more serious roles shows that fame puts the “lucky” celebrity in question into a narrow box of self-expression.

Jonah Hill’s Net Worth As of this year, Jonah Hill has a net worth of 73 million dollars, and was among the top 30 highest paid actors at one point, with the peak of his career being an annual paycheck of 16 million dollars. It is safe to say that Jonah Hill does not suffer mentally due to a lack of wealth, and was in fact an actor in demand during the last decade and a half.

The issues arise from an overwhelming amount of money being ultimately hollow, if tremendously beneficial on a material level. Hill can now fund his own projects with the money he got, but that was not enough for him to dislike being in the public eye all the time.

As mentioned beforehand, Jonah Hill’s public image was originally heavily dependent on the movies that made him famous, which were mostly, if not only, comedies. Films such as Forgetting Sarah Marshall, Superbad, 21 Jump Street, its sequel 22 Jump Street, and The Wolf of Wall Street are among the biggest Hollywood films of their genre and eras. Hill also appeared in numerous animated works, such as The Simpsons as Andy Hamilton, the DreamWorks films Megamind and the How to Train Your Dragon franchise, the Lego Movie series as Green Lantern, and Sausage Party, with the latter being another collaboration between Hill, Seth Rogen, and Michael Cera.

RELATED: What is Social Anxiety Disorder? Signs and Solutions

As the surface-level description of his filmography indicates, Jonah Hill had a major role in several beloved and successful contemporary comedies, but during the 2010s, he decided to take a more serious and independent route. This led to films such as War Dogs, a black comedy crime film, Mid90s, a coming-of-age dramedy serving as Hill’s directorial debut and based on his own childhood, and the aforementioned Strutz that he has been promoting. Hill’s fame and fortune appears to have allowed him to pursue more personal projects, but the fact that it took this long indicates that industry-related issues that commodified Hill’s public persona prevented him from pursuing this kind of project when his career really kicked off.

Jonah Hill is currently dating Sarah Brady, a surfer, as confirmed by a post on Instagram. If what he wrote on social media is of any indication, the two are in a happy relationship, and Hill credits her for being supportive, which likely helps with his anxiety.

RELATED: Bradley Cooper and Girlfriend Huma Abedin Are Your Favorite New “It” Couple – Here’s Why

Despite this, people on social media were quick to spread rumors of Hill and Brady already being engaged, to which Hill responded in his signature lowbrow way. Even if their relationship appears to have blossomed recently, it is likely that Hill would not have gotten those obnoxious comments if it were not for the fame attached to his name.

Has Jonah Hill Ever Won an Oscar?

Jonah Hill has received nominations from most major awards associations in Hollywood, from the Golden Globes to the Screen Actors Guild. Of course, among those important ceremonies is the Academy Awards, which nominated Hill for the category of “Best Supporting Actor” for his roles as Peter Brand and Donnie Azoff in the films Moneyball and The Wolf of Wall Street.

Unfortunately for Hill, he did not win the Oscar in either year. However, both of the films the Oscars nominated him for eventually got him an award from the Palm Springs International Film Festival for “Creative Impact in Acting.” The Wolf of Wall Street also got him an award for “Best Comedic Performance” at the MTV Movie Awards.

What Is Jonah Hill’s Future in Hollywood?

With a relatively new relationship and a desire to exit the public view after the presentation of Strutz, Jonah Hill will likely spend the remainder of the decade, and the rest of his career, in more private spaces. For someone with strong enough anxiety to overwhelm him the way it does, it is clear that the fame he enjoyed was not all sunshine and rainbows.

Fans can likely expect more artistically-driven projects from Hill, since he hasn’t mentioned retiring altogether, and he co-wrote an upcoming comedy film with Kenya Barris titled You People, but his involvement with the glamor that comes with Hollywood seems to be mostly over as he is focuses solely on his craft.

KEEP READING:
The Shocking Truth About Lizzo’s Weight (And Why We Have It All Wrong)