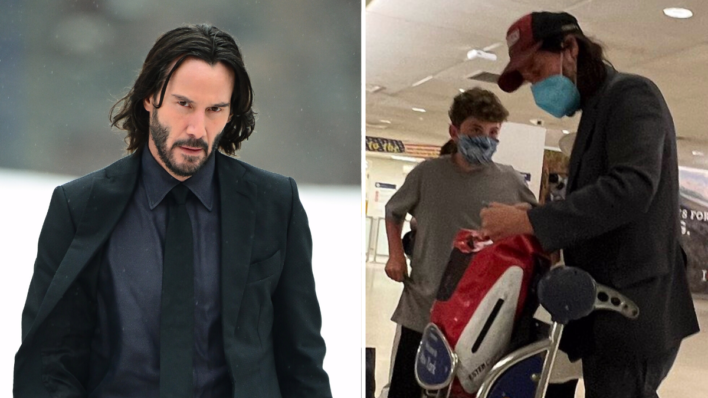 When he was stopped by a fan at baggage claim, Keanu Reeves proved that he’s not just a great actor but also a class-act.
By Lindsey Staub    August 3, 2022

When he was stopped by a fan at baggage claim, Keanu Reeves proved that he’s not just a great actor but also a class-act.

We all know Keanu Reeves as vengeful John Wick and the criminal Neo, but few of us know the real Kanu Reeves, which happens to be his best part yet.

After an eight-hour flight from London to New York on July 4, Keanu Reeves was spotted by a young boy at the baggage claim carousel.

The Questions One Young Boy Asked Keanu Reeves at an Airport

The boy approached Keanu after having recognized him and began to fire off questions, such as does the Canadian actor drive race cars and did he live in New York.

Andrew Kimmel, a television producer, documented the entire interaction on his twitter profile.

Reeves stayed with the young man until all of his questions were answered, skipping out on the stereotype that celebrities always avoid fans when in public.

After getting an autograph, the boy asked Reeves why he was in London (to film a documentary) and if he drove in the Grand Prix, which he pronounced with the ‘x’ at the end. Reeves kindly repeated the name back to him, pronouncing it correctly in a French accent, and then answered that no, he didn’t drive in the Grand Prix (he was more into motorcycles).

“The man could not have been nicer, especially after an international flight,” Kimmel tweeted.

When asked more about his upcoming plans, Reeves shared that he was going to see a broadway show and that he was staying in Midtown while away from his home in Los Angeles.

How Keanu Reeves Proved the Importance of Staying Humble

After firing off question after question, the boy ran out of things to ask. That’s when Keanu took over and began his own interrogation of the young fan, asking the boy why he was in Europe and which galleries he went to in Paris.

“I thought I’d share this because the dude is a class act and little moments like this can make such a big difference in people’s lives,” Kimmel shared. “We need more Keanu’s!”

Kimmel then stepped in to ask for a photo, proving that fanboys can be any age.

“And yes, I geeked out a little and asked for a photo. I mean… had to,” Kimmel said.

Despite his immense success and fame, Reeves is still down-to-earth. He spent so much time after a long flight in order to speak with a little boy, making the boy’s day.

This exchange proved that Reeves is an excellent actor: He can portray a dark character or a moody man, but inside, he is a humble and caring guy.

stay humble
“Art is about trying to find the good in people, and making the world a more compassionate place.” – Keanu Reeves
Tags
Share
← Prev Post Next Post →