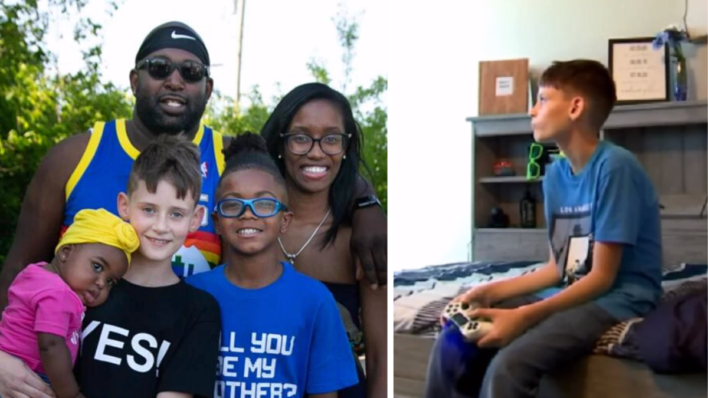 One little boy transformed a couple’s life when they gave him a safe home after going through four years of trauma.
By Amber Dowling    February 1, 2022

One little boy transformed a couple’s life when they gave him a safe home after going through four years of trauma.

Kids can change you, but sometimes the children that affect you most are the ones that you never expected to have. At least that’s the situation one Nashville, Tennessee couple found themselves in when they decided to foster.

Back in 2018, Dominique and Kevin Gill decided to open their home to a foster child named Andrew. He was 10 at the time, and had been in state custody since he was six years old. His parents’ parental rights had long since been terminated, and although Andrew had four siblings, they had all been adopted right away.

Not Andrew though, and after four years of trauma he had a pretty big road of healing ahead of him. “During his first week with us, he sat in his room with the door closed and looked at old pictures,” Dominique told Today. “He didn’t want to talk.”

However, the couple’s son, Joc, asked Andrew if he wanted to play video games. The boys bonded over the games and their mutual love of PopTarts.

They’ve been best friends ever since.

That didn’t mean it was an easy road, of course. According to the Gills, there were times when Andrew was still withdrawn, or when he would misbehave or even shut himself in his room. Eventually though, it seemed as though Andrew finally found a place where he could belong.

“As the years went on, [Andrew and Joc] got pretty close,” Kevin said to WBIR Channel 10. “It’s good to see that bond they have grown over the years.”

From the beginning, the Gills’ plan was to foster and help as many kids as possible, but not adopt. They already had Joc and a little girl named Kynnedi, and there had been interest in another family taking Andrew in. However by the time Andrew was in seventh grade and a second adoption fell through, the Gills knew it was a sign.

The Gills couldn’t just announce their intentions to this special little boy; they wanted to make him a part of their family with a big gesture. So they had Youth Villages Counsellor Molly Parker ask Andrew if he wanted to go for a walk with her.

On the walk, Andrew saw the Gills and family friends he had met throughout his time with them. At first, he was surprised by the balloons and signs. But then the family popped the question, and Joc even had a shirt on for the occasion that said, “Will you be my brother?”

According to WBIR Andrew agreed with a “yeah” and then his new parents gave him a shirt that said “yes” on the front.

“From the beginning, Andrew has always said, ‘Thank you for accepting me,’ ‘Thank you for not giving up on me,’” Dominique also told TODAY. “People would read his file and get scared away. But I knew he was a good child who had experienced a lot of trauma.”

Today the Gill family feels complete. Not only do they have Andrew, Joc, and Kynnedi, but the family also recently welcomed another baby boy, KJ. The matriarch says that getting there has been a journey, but love is what got them through.

Love doesn’t have a colour. (Andrew) is our son just like Joc is our son. He’s a part of us.

As Dominique shared on Instagram in September 2020, the year was full of milestones. “Life has been totally great with a lot of hurdles,” Dominique wrote at the time. “With patience, love and more patience we still managed to adopt our son [and] celebrate every little milestone thus far with patience.”

Not everyone is in a position where they can foster or adopt a child or change someone else’s life the way the Gills did with Andrew. But this family’s heartwarming story reminds us that families come in all shapes and sizes, and home is where you make it. It also reminds us that everyone needs love, and that’s especially true of children who seem to be on a bad path when you first meet them.

There are smaller ways we can all help in our own lives. Volunteering time, money or items to local centres or organizations is one way. Becoming a Big Brother or a Big Sister to a child in need is another. Meanwhile, if you are interested in becoming a foster parent in Canada, the first step is to contact your local Children’s Aid Society or Indigenous Child and Family Well-Being Agency. You never know how it may change a life- yours, or another child’s.

FAMILY IS WHAT TURNS A HOUSE INTO A HOME
“Family means nobody gets left behind or forgotten.” — David Ogden Stiers
Tags
Share
← Prev Post Next Post →