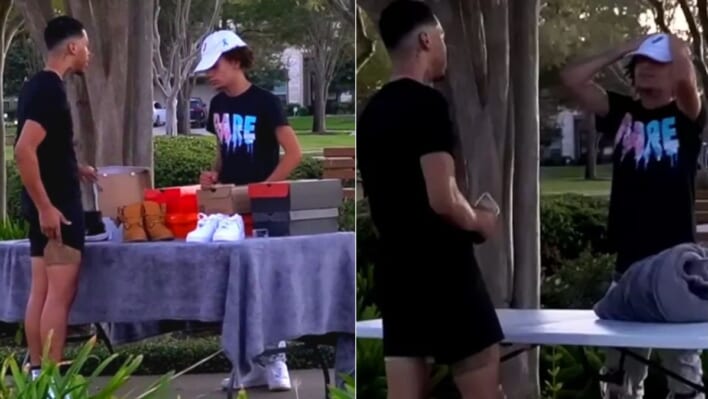 The boy’s sister had gotten into an accident and he needed fast cash.
By Sophie Babinski    November 22, 2022

The boy’s sister had gotten into an accident and he needed fast cash.

There is often no limit to the things we would do for our families. Most of us work hard every day to provide for them– we make sure basic needs are met, including putting food on the table, providing a safe and warm place to live, and providing everyday little luxuries.

Usually, however, it is the parents who are going above and beyond to provide for their kids. One recent story flipped the script when a teenage boy was found doing everything in his power to provide for his mother and sister.

Content creator deno.10k recently came across a few street vendors selling their wares on foldout tables at a park. He noticed that one vendor, who was selling fashionable shoes, looked notably younger than the others.

He sat in his car and watched the man try to sell for a while. When he saw that the man wasn’t making any sales, he decided to approach him and find out what was going on. As he approached the man, he realized he wasn’t a man at all– but a teenager!

Deno looked at the shoes the teen was sharing, including exclusive Jordans and Timberland boots, and he noticed that most of them were almost new and still in their boxes. After talking to the teen, he realized that the shoes were his personal collection that he was selling for “personal reasons”. Deno pressed him and asked what the personal reasons were. The vendor hesitated.

He explained that he needed fast cash for “personal reasons”, and he has even considered turning to petty theft or crime to get it. However, he explained to Deno that he felt crime wasn’t worth it. That kind of fast cash could have devastating consequences. So, he decided to sell his beloved collection of kicks.

Finally, the teen explained that his sister had gotten into a serious accident. His mother was putting all of her earnings towards hospital bills, and they urgently needed financial help to put food on the table. The story touched Deno, who decided to do something major to help the young entrepreneur.

Deno Steps in and Does Something Drastic

Deno told the boy that he felt for him but he didn’t need any new shoes so he couldn’t buy them. He promised the boy that he would come back later to help him out. Deno got back in his car and waited for over 20 minutes to see if the teen would make a sale.

When he didn’t, he decided to make a real difference in the boy’s life. When the boy saw Deno again, he was shocked and grateful to see that he had come back. However, what happened next had him completely speechless.

Deno reiterated that he couldn’t buy any shoes because he didn’t need any. Then, he handed him a wad of cash with $2000 in it. The boy was speechless. He started choking up, and had to walk away before he thanked Deno.

Deno gave the young vendor money because he believed he had integrity and was doing the right thing for his family. We should always remember that when we strive to do what’s right, there are forces everywhere that will help us achieve our goals.