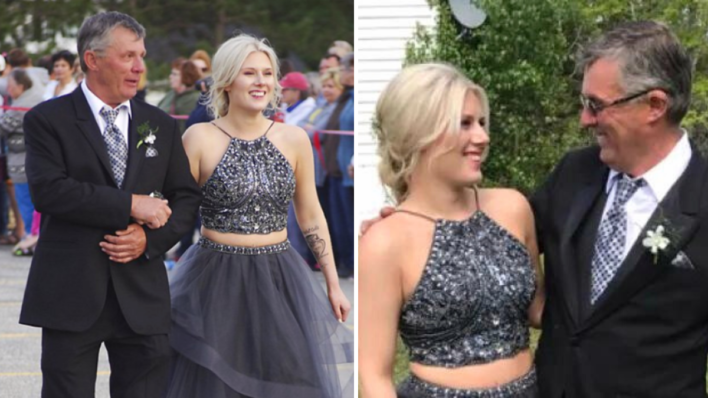 Teen’s Boyfriend Passes Away in a Car Accident – Then, His Father Asks Her to Senior Prom

Because she couldn’t take her boyfriend to prom, she took the next closest thing: his dad.
By Lindsey Staub    July 27, 2022

Because she couldn’t take her boyfriend to prom, she took the next closest thing: his dad.

Just a month before her senior prom, Mackenzie Stewart’s boyfriend, Marshall Curtis, died in a car accident. The two had been together for a couple of years, and Mackenzie couldn’t imagine bringing anyone else as her date.

That is until Carson Curtis, Marshall’s father, stepped up.

Why One Father Took His Son’s Girlfriend to Senior Prom

Curtis had gotten to know Mackenzie well over the course of her relationship with his son and had cared about her; he didn’t want her missing out on a memorable night.

“She’s been a big part of our family for over two years now and she’s Marshall’s girl. It wasn’t easy, but we were overwhelmed of all the support of the community, the people who stand behind us near and far,” Curtis said. ”We love Mackenzie like our own daughter.”

On the night of the prom, Curtis and Mackenzie pulled up at Blackville School in a bright yellow 1965 Volkswagen Bradley. On the back of the car was a sticker with a photo of Marshall and Mackenzie and a caption that said “Marshall and Makenzie forever.”

When the two went inside arm in arm, the room erupted in applause.

“I guess I did the right thing,” Curtis said. “I was kind of nervous thinking maybe [people would think], ‘What’s this old guy doing here?’ But everything worked out, and my whole family — we just can’t believe the supportive community we have.”

Mackenzie then went on to win the prom queen title.

He would be so proud, so proud of everybody. All his buddies were there. It was just like he was there, and I believe he was there.

A proud member of the Anglican Church, Marshall, who had graduated the year before and became a technician at Trevors Nissan, was said to be respected, gentle, and well-liked.

“Marshall loved everyone and everyone loved him,” Curtis said. “He was such a gentle, gentle young man. Loved by everyone. It’s just heartbreaking. It’s not fair.”

Though honored to take Mackenzie to prom, Curtis hopes no father will ever have to do what he did. “It wasn’t the easy thing to do, but it was the right thing to do.”

Amid grief, one father stepped up to give his late son’s girlfriend a chance to enjoy her senior prom. Even in mourning, when we come together, we can see light in dark days.