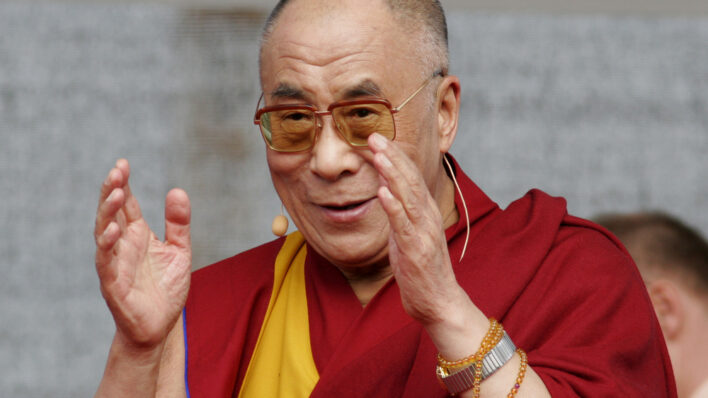 Ever since he was a little boy, the Dalai Lama has had big shoes to fill. As the heir to
By Matt Valentine    February 14, 2018

Ever since he was a little boy, the Dalai Lama has had big shoes to fill. As the heir to

Ever since he was a little boy, the Dalai Lama has had big shoes to fill.

As the heir to the spiritual title of Dalai Lama, Lhamo Thondup has had a wild and eventful life, which has been the center of more than one major motion picture (including Brad Pitt’s 7 Years in Tibet). I’ve studied many of the wisest and most influential people in history, and few have made such a global impact within a single lifetime as he has.

And since I’ve been interested in Buddhist philosophy for years, I have come to know him much more intimately than the average person, learning several powerful life lessons in the process.

Love and compassion are necessities, not luxuries. Without them humanity cannot survive.

It’s difficult narrowing down the most important bits of wisdom I’ve distilled from the spiritual leader over the years, but the three below really stand out.

Take the powerful lessons below and use them to not only make your own life better, but also to help make the world a better place.

1. Prioritize what is most important to you (you’re never too busy)

Since first learning about the Dalai Lama’s morning routine, I’ve been inspired to live by a very simple principle: prioritize what is most important to you, because the truth is, you’re never too busy.

Most of us make the excuse that we can’t do something because we have too much on our plate. But I’ve found that in virtually every case, it’s not that you’re too busy — you just don’t care enough about it.

Every day, the Dalai Lama wakes up early in the morning to meditate, exercise, breathe fresh air, and catch up on current events while eating a healthy breakfast. He lives in a way that prioritizes the qualities that are most important to him — wisdom, knowledge, health, etc.

Life is short and your time is precious, so spend the day on what is most important to you. If the Dalai Lama can find in his incredibly busy schedule to prioritize tasks based on what means the most to him, so can you.

2. Love and kindness are more important than beliefs

War is, predominantly, the result of religious or belief-based differences. There are geographic disputes and diplomatic fall-outs, but rarely has war been fought without that underlying foundation.

We place so much focus on belief when in reality, it affects very little of how we actually live our life. Perhaps it’s the result of our unique intelligence in the animal kingdom. Whatever the case, we live in our heads and often place too much weight on things that don’t exist beyond it. That’s not to say someone’s belief can’t be true, but that the allegiance to a certain belief itself is just an idea in our mind.

Does a Christian fall differently than a Buddhist? We all fall, and when we do, it’s kindness and caring that help us get back on our feet. It’s love that heals our wounds and keeps us from spiraling into depression. After all, we’re social creatures, and without connection our mind quite literally begins to crumble.

Kindness is such a basic quality, yet it continually gets passed over in favor of taking sides. As a result, people — often innocent — suffer because someone doesn’t like the ideas of another person.

The world needs more love and kindness, regardless of religious or spiritual beliefs.

3. There is goodness in all people

Sometimes, it can be difficult to listen to the Dalai Lama speak, specifically when he’s talking about certain notable politicians you might not be very fond of. He’s just so damn….compassionate.

The Dalai Lama demonstrates a remarkable level of compassion. What this translates into is the ability to see goodness in all people, even highly disliked figures.

As someone who has meditated extensively, I am much more understanding and compassionate towards others than I was in the past. I am willing and able to judge people with a kindness that I would have previously criticized, so I understand the impact of regularly practicing meditation on character.

A while back, I created a short contemplative practice called “healing through understanding” that I’ve found a lot of value in. The basic premise is to picture someone who has wronged you or whom you look at unfavorably, and to analyze what might have shaped their actions.

By the end of the exercise, something interesting happens: you suddenly develop more compassion for the person you’re attempting to understand.

We’re all affected by our conditioning. Some of us have had a very rough upbringing or were heavily influenced by a dangerous belief at a sensitive time. That doesn’t make us bad people, just people who were sent down the wrong path. That basic goodness hasn’t disappeared, it’s just being covered by layers of negative or distorted beliefs that color the way we see the world.

This doesn’t mean you invite terrorists over for dinner, simply that you stop looking at the world with such anger and hatred by actually trying to understand it a bit more deeply. By doing so, you stop contributing to the cycle of hatred that causes so much conflict.