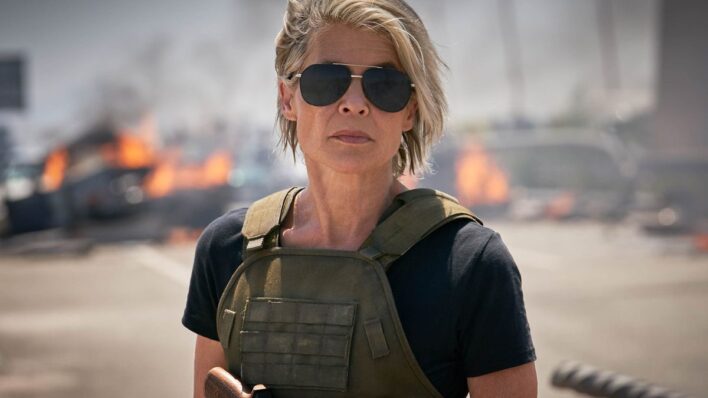 Linda Hamilton became an action when she starred as Sarah Connor in The Terminator. 30 years later, she’s returning to her roots.
By Maya Khamala    November 4, 2019

Linda Hamilton became an action when she starred as Sarah Connor in The Terminator. 30 years later, she’s returning to her roots.

Children of the ’80s and ’90s know Terminator 2: Judgement Day’s Sarah Connor and her unparalleled awesomeness—and those born later have had plenty enough reason to travel back in time to 1991 to become acquainted with the legendary heroine and her enduring legacy.

But what ever happened to Linda Hamilton, the real, live woman who played her? You know, between Terminator 2 and the release of 2019’s Terminator: Dark Fate?

Now, the 62-year-old Linda Hamilton has finally reembodied Sarah for the flick (alongside Arnold Schwarzenegger) after almost 30 years spent trying to free herself from the character’s hold.

So why did Linda Hamilton come back?

And why did she disappear from the public eye to begin with?

Linda Hamilton never predicted the impact that making The Terminator, released in 1984, would have on her budding career. Hamilton, who studied under Lee Strasberg in New York, wanted to be a Shakespearean actress, but The Terminator altered her course, to say the least.

In that first Terminator, Sarah Connor spent much of time running and being scared, which Hamilton found “hard on the psyche,” despite the success that resulted from the role.

Years later, when producer James Cameron contacted her to see if she’d commit to Terminator 2, (much as he did this time around for Dark Fate), Hamilton requested a role other than the damsel in distress—in other words, she wanted Sarah’s character to go crazy and grow a pair. Cameron did as she wished and wrote it in.

And thus was born the Sarah Connor legacy…

Heartbreakingly, Hamilton left by her partner Bruce Abbott while she was pregnant– around the same time Terminator 2 was set to start filming. Hamilton was a new mother with a special incentive to “be that powerful, strong woman,” ultimately taking a stand for her own emotional survival in a role as a mother without any recourse but herself.

Having just given birth, getting in fighting shape for the role was also a special challenge for Hamilton—but not one she shied away from.

“That character still isn’t normalized,” Hamilton’s Dark Fate co-star Mackenzie Davis told the New York Times. “She wasn’t evincing this hyper-fashionable or hyper-feminine aesthetic of a time, so it’s allowed the Sarah Connor character to be this transcendent visual icon.”

The limits of strength

The downside of Hamilton’s seeming overnight success (and indeed anyone’s unmitigated success in a strong, unconventional role) was that Hamilton was only offered other roles as warrior women, none of which she found as interesting as Connor.

Hamilton had hoped to play a range of roles from action to comedy, and instead found that most were too intimidated by her to give her just any old role. At the same time, she also attributes her reduced opportunities as a “strong woman” actress to the fact that she had a baby with Cameron (to whom she was married to from 1997-99) and proceeded to disappear from the public.

The rise of Arnold

If one were following the career of the other Terminator 2 star, Arnold Schwarzenegger, on the other hand, and happened to compare his trajectory post T2 to Hamilton’s, the contrast is altogether striking.

Schwarzenegger has, and continues to enjoy a place in the cinematic spotlight, having played a wide variety of roles over the years. Not to mention, he even entered party politics as the governor of California for 8 years— while still acting. You can’t get much more in the spotlight than that.

In a 2005 appearance on Larry King Live, Hamilton discussed her depression and bipolar disorder, which led to violent mood swings and suicidal thoughts, as well as how she eventually sought therapy and medication to manage her condition.

By 2012, Hamilton, noting that her agents were not calling and that she felt altogether disillusioned with Malibu, decided to rough it for a few years on a farm in Virginia before moving to New Orleans, where she says she knows people better after just a few years than she ever did in California.

Linda had another life-changing decision to make

When Cameron reached out to ask her to breathe new life into Sarah Connor, she had been working occasionally in TV and had not starred in a major studio film in more than 20 years, but she still had to be convinced to sign on.

She didn’t want reentering the spotlight to impact her authentic life, or for her neighbors to see her differently.

But she ultimately said yes…

“Sarah is a broken being at the beginning of this film,” Hamilton says. “She’s a woman without a country, adrift and full of rage.”

To play Sarah Connor, Hamilton had to dig deeper than ever, learn how to fire a rocket launcher, and get back into fighting shape (again), this time at age 60.

She trained in the desert with Green Berets, while doctors put her on a regimen of supplements and bioidentical hormones to build muscle.

But Hamilton’s quick to point out that this was not about vanity. “I want people to see me and go, ‘Oh my God, she got so old!” she says. “It’s incredibly liberating to play someone of this age.”

What we can learn from Linda’s journey

Cameron, aware of the special “risk” at play when hanging a major action picture on an actress who’s 62, was encouraged by the success of 59-year-old Jamie Lee Curtis as a gray-haired Laurie Strode in 2018’s Halloween revival.

“I think you could cite the examples of that kind of chance being taken previously on one finger,” he says.

Linda Hamilton’s journey is proof positive that our story is never truly over as long as we decide to open ourselves up to new challenges and possibilities, regardless of age, illness, or gender.

Though she lived life on an unexpected path, it all led her right back to her most triumphant moment, where she embodied an iconic hero who has inspired millions for three decades now.