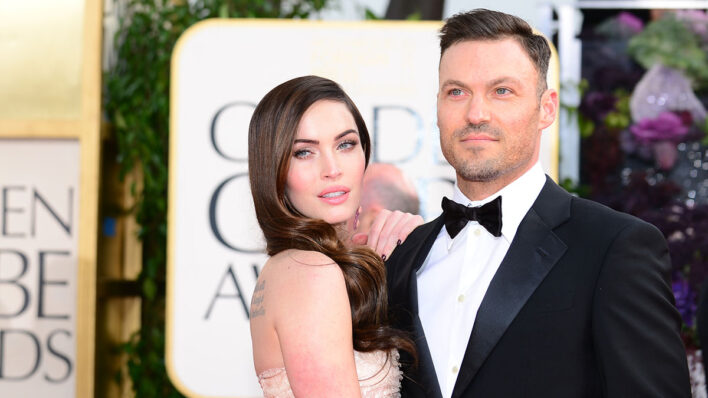 Megan Fox and Brian Austin Green filed for divorce before realizing their love and their marriage was still worth working on.
By Barbara Pavone    November 8, 2019

Megan Fox and Brian Austin Green filed for divorce before realizing their love and their marriage was still worth working on.

At first glance, Megan Fox and Brian Austin Green’s relationship appears to be picture-perfect. However, since first meeting in 2004, the couple has faced more challenges than most.

Their romance has seen a LOT of ups and downs (including a near-divorce), but the actors have managed to work through their issues, find their footing, and come out the other side deeply in love. These days, they’re fully devoted to one another and their three children: Noah, Bodhi, and Journey.

Here’s how the struggling lovebirds overcame a slew of challenges and ended up on top.

What we can learn from Megan Fox and Brian Austin Green

At first, they weren’t on the same page

Megan Fox first met (and became instantly smitten with) Brian Austin Green when he guest-starred on her show, Hope & Faith.

From the outset, their compatibility was tested. For one, Fox was just 18 at the time while Green was 30. For another, he had just gotten out of a serious relationship with his Beverly Hills, 90210 co-star, Vanessa Marcil. The couple had actually called off their engagement just the year before and shared a two-year-old son when Green’s journey crossed Fox’s in 2004.

Most importantly, their feelings weren’t mutual at first

Recalling their first encounter in a 2009 interview with The New York Times, Fox reminisced about the specific moment when she realized Green was something special.

“I liked him right away,” she said, recalling, “Everyone was around the monitor watching a scene, and Brian accidentally touched my leg. I remember literal electricity shooting through me and out me from every direction. It was like magic.”

Unfortunately, Green was not on the same page. Opening up on an episode of Barstool Sports’ KFC Radio, Green admitted that the connection wasn’t instant for him.

Explaining that he “wasn’t looking for a relationship at the time,” the actor remembered thinking, “This can’t f***ing happen. This isn’t going to happen, no way.”

That all changed when he realized he might lose her

“It’s funny, I kept pushing her away early on, because I was like, ‘I don’t want a relationship,’” he continued. “And then she was like, ‘Well cool, I’m going to go date.’ I was like, ‘Wait a second, I didn’t say go date, please!’”

That was his aha moment and their love quickly blossomed into an engagement in 2006.

Their careers got in the way

Despite Green finally coming around to the idea of being in a committed relationship so quickly after his split from the mother of his first child, the pair soon faced another major bump.

Not long after their engagement, Fox’s career really began to take flight, as she landed major roles in the Transformers franchise, as well as the lead in Jennifer’s Body.

Meanwhile, Green continued to solely work on the small screen with one-off appearances and a short stint on Freddie, which lasted a single season.

As he admitted to TV Guide in 2008, their diverging career paths began to test their relationship. He revealed, “We have more time away from each other now than we’d like.”

By February 2009, that separation had taken its toll and the wedding was called off. Both actors kept rather quiet on the subject, but Fox appeared to place some of the blame on age when she justified, “Marriage isn’t a realistic goal for someone who is 23, that’s all.”

I just wanna concentrate on becoming a better person before I try to commit to being someone else’s wife.

She took time to better herself

Keeping her word, Fox took time to work on herself, and decide what she wanted at that stage in her life. By the end of that same year, she knew Green was who she wanted. And she wasn’t afraid to push the failure aside and give love another try.

Rather than holding any resentment against her, Green took a step back and worked to understand Fox’s side of things. As he told Access Hollywood, he knew she needed the time apart to figure things out.

He said, “She was 18 when I met her, and she went through an enormous change in her life because of her career in general. So she went through the natural period of, ‘I’m not sure if I’m ready to be in such a settled relationship.’ I have an 8-year-old, and he was two at the time that Megan and I met. She helped me raise him, and that’s a huge responsibility.”

Jump to June 2010 and the couple was engaged again and, just two weeks later, they wed in a secret ceremony in Hawaii. In September 2012 they had their first child, Noah Shannon, then their second, Bodhi Ransom, in February 2014.

Unfortunately, those gnawing insecurities then popped out of the shadows yet again.

They found a new perspective

In August 2015, Fox filed for divorce, citing irreconcilable differences, but the universe had other plans. In April 2016, she announced she was pregnant again and everything changed. Putting the focus back on their family, the couple found a new perspective and reconciled. Fox even filed papers to dismiss her divorce case in April 2019.

Reflecting on the couple’s breakups and makeups, Green told HollywoodLife that, over the years, they’ve learned the three major keys to wedded bliss. First is staying grounded — “Our marriage is very normal at home” — then there’s communication — “We discuss everything. We try and be as open and transparent as possible with each other” — and finally, embracing each other’s differences.

“The more we talk about things and through things, the more we understand each other,” Green confessed, elaborating, “We’ve really come to appreciate the differences in each other more so than we did before.”

Noting that it’s easy to get competitive and lose sight of what’s important, Green added that the No. 1 thing to remember is the importance of being a team.

“I think that if you lose that competitive nature and you make it a team effort, the team can always produce more than a single person,” he reasoned.

Why not have all of my strengths and all of hers and come together on something?

Yes, “marriage is hard,” as Green concluded, but at the end of the day, it’s imperative to remember that sometimes love takes work — and that’s okay.

Rather than giving up or putting too much pressure on yourself to have the perfect relationship, it’s healthier to take things day by day, talk through issues, and not get discouraged. All you can do is your best and, even if you’re not always on the same page, by putting in the time you can still end up on even (happy) ground.