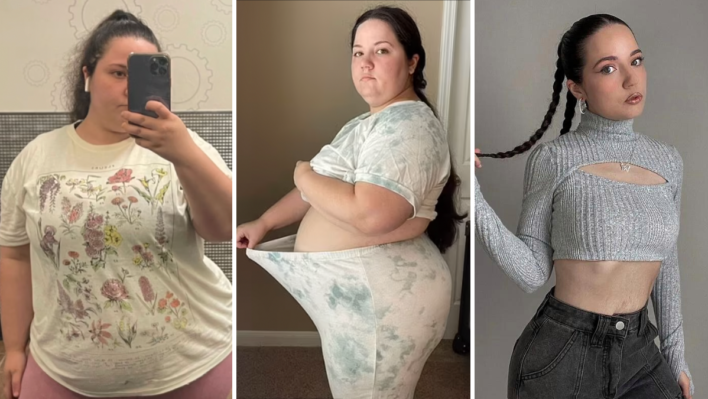 The 25-year-old mom states her kids as her motivation on her weight loss journey.
By Amanda Shaw    November 18, 2022

The 25-year-old mom states her kids as her motivation on her weight loss journey.

Even though she wishes she could erase it from her memory, 25-year-old Sara Lockett of Washington, D.C. remembers all too well that afternoon she got stuck on the playground slide.

“My son was too scared to go down the slide on his own and wanted us to go on together,” she said. The mother of two young kids, Ameliana (four) and Roman (two), wanted nothing more than to play with them; but she was horrified when, because of her weight, she got stuck on a bend in the slide. Her husband had to pull her out, much to her embarrassment.

“That moment is burned into my memory,” Lockett said. “I knew I had to try something else to get my life back.”

Lockett hadn’t always been overweight, but two pregnancies, coupled with preeclampsia and gestational diabetes, had left her seriously struggling to lose the extra pounds. With two young children, Lockett was always on the go, and she didn’t have much time to think of herself.

“I didn’t have the best diet and suffered from binging,” Lockett admitted. She turned to Pop-Tarts for breakfast, McDonald’s for lunch, and fried chicken for dinner. Eating what she could, when she could, she made bad choices, and the weight continued to pile on. She tried exercising and eating healthier, but she couldn’t seem to maintain it. One day, she learned why.

RELATED: Woman Who Was Always Dumped For Her Weight Finds Love With Personal Trainer

When Lockett was diagnosed with polycystic ovary syndrome, which can lead to low mood, unbalanced hormones and lack of energy, the situation began to seem hopeless. Lockett couldn’t find the motivation to eat better; she would always feel tired and hungry. Trying to maintain her energy levels, she would eat more — often up to 3,000 calories a day. She soon reached 252 pounds.

“I felt horrible,” she said. “I didn’t feel like going out in public with my husband…and kids.” The extra weight was impacting her everyday life. It kept her from enjoying herself and her time with her family.

How One Woman Decided to Reclaim Her Life

After that humiliating day at the park, Lockett knew that she had to do something. She had reached a breaking point and never wanted to feel that way again. She knew she had to turn her life around and focus on her health, for herself and for her family. Her kids became her motivation.

Lockett decided to get a gastric sleeve surgery, a surgery where a large part of the stomach is removed. Though not a miracle solution, the surgery did help her take off some of the weight. It boosted her morale and gave her the motivation she needed to get back on the right path.

RELATED: Woman Dumped By Fiancé For Being Overweight Gets Ultimate Revenge

After the surgery, Lockett was encouraged by the initial weight loss; but she knew it wasn’t enough. In order to make a real change, one that would impact her health and her future with her family, Lockett realized she would have to put in more time and effort.

Six weeks after her surgery, she started going to the gym. She also focused on her diet. Instead of Pop-Tarts, Lockett now eats egg whites with turkey bacon for breakfast. She’s swapped the fast food for rice and vegetables.

That’s when she started to see what she called “massive changes.” Lockett set a goal of 154 pounds, but when she reached that point on the scale, she saw no reason to stop. By then, she had developed good habits that was still moving her along a path to success.

How One Mom Proved the Importance of Resilience

Today, Sara Lockett weighs 116 pounds; that’s less than half of what she weighed at her heaviest. Now, she doesn’t have to shy away from playing with her kids; in fact, it’s one of her favorite things to do.

“I feel better than I have ever felt. I can run around with my kids and play with them at the park…I certainly don’t have to worry about not fitting down the slide with them now.”

Lockett is proud of herself for reaching her goal of being a healthier mom for her two children, and rightly so. She has also found the time to take care of herself, too.

RELATED: Woman Brutally Dumped For Being Overweight Gets The Last Laugh

The young mom feels better than ever in her clothes and has begun experimenting with fashion again — something that she totally avoided when she weighed over 200 pounds.

“I’m getting back into my street style,” she said. “I have my confidence back and it feels great…I feel like I have my life back again. I feel and look better than ever.”

Now, Lockett has ditched the baggy t-shirts for leggings and crop tops. She’s glowing with confidence and pride, knowing that she took charge of her life and made the choice to be a healthier, happier mom to her kids. She’s certainly set an example for them on what it means to live your best life.