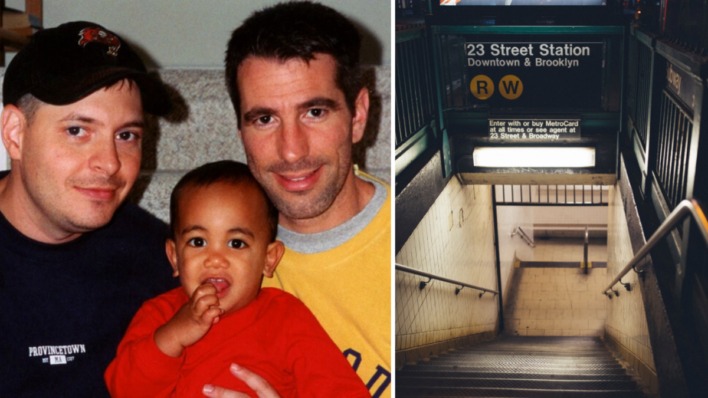 One man adopted a baby that was abandoned in a subway station, proving that family can be found in the most unlikely of places.
By Lindsey Staub    May 19, 2022

One man adopted a baby that was abandoned in a subway station, proving that family can be found in the most unlikely of places.

In the corner of a New York City subway, wrapped in a sweatshirt, Danny Stewart found the greatest gift of his life.

It was August 28, 2000 around 8 p.m., and Danny was on his way to meet his boyfriend Pete Mercurio for dinner.

“I got off at the 14th Street exit and noticed a bundle on the ground against a wall. All I could see was two little legs sticking out of this dark sweatshirt. I’m thinking, “Some little girl left a doll.” I started to go up the stairs but glanced back. That’s when the legs moved,” Danny told People.

Danny realized the doll was actually… a baby.

“I wanted to make sure he was breathing okay and that he seemed to be in good condition,” Danny said. “His umbilical cord was still partially intact, so I thought he was a newborn. I thought he might have been injured, so I didn’t pick him up for fear of causing further injury.”

Danny attempted to get the attention of other passersby, but no one stopped. He quickly headed out of the station and to a payphone on the street where he dialed 911.

“I go back downstairs to wait with the baby. Time was standing still. I was thinking it was taking a long time for the police to come. I didn’t think they believed me,” he said. “I had a quarter in my pocket, and ran back up to the stairs to that payphone and called Pete.”

Pete and Danny had been together for three years at that point and both lived in Pete’s apartment.

“I picked up the phone and he said ‘I found a baby,’” Pete said. “Danny doesn’t joke around, the tone of his voice was just so alarming. He asked me to call 911 again and told me where he was, which is one block from my apartment. I said, ‘I’m just going to come down there. It’d be faster for me to get help once I’m there.’”

When Pete arrived, the police were already there, taking care of the abandoned child.

“Two police officers are walking up and one is holding the baby in his arms. And at that minute, it was just very real, very chilling,” Pete said. “We got to watch this miracle in this police officer’s arms yawn and wiggle a little bit. The ambulance was taking forever to arrive, so the police decided to transport the baby in the back of their car. We said goodbye, watched them put the baby in the car and they drove away.”

Even back then, Pete knew that this child would be a part of Danny for the rest of his life.

“You know, you’re going to be connected to that baby for the rest of your life,” Pete told Danny. “I don’t know how, but someday he’s going to learn about this night and he may want to meet the person who found him.”

Why Adopting an Abandoned Newborn Wasn’t Their First Thought

The next day, Danny went to the hospital to find out what happened to the baby, but he was told only families were given that information.

Six weeks later, Danny received a call from the Administration for Children’s Services, the child welfare agency in New York City, asking him to testify at a hearing to terminate the biological parental rights for the baby.

At the hearing, Danny recounted the events from that night in the subway. Before he left, the judge explained that they often try to place a baby in a pre-adoptive foster care as quickly as possible. That’s when she asked if Danny would possibly adopt the child.

“All eyes are on me. I mean, this is totally unexpected by everyone, mostly me,” Danny remembers about the day. “I pause for a second and say, ‘Yes, but I don’t think it’s that easy.’ And she said, ‘It can be. If you’re interested in adopting, then you’ll need to show up at the next court hearing to state your intentions.’ I said okay.”

Now it was time for Danny to inform his partner about what he had just agreed to.

“He called me and said ‘You’re never going to believe this.’ And I said, ‘Absolutely not. Go back into the courtroom right now and tell her no, you misspoke,’” Pete said.

Pete was a writer and graphic designer and Danny was a social worker. Pete was concerned that they wouldn’t be able to afford raising a baby in the city.

“What were you thinking? How could you say yes? How are we going to make this work? We don’t have any money. We don’t have the space. There’s no way we can raise a child in this city. We have nothing,” Pete said to Danny that night.

But Danny knew this was something he couldn’t pass up. “This is a gift. We can’t refuse this. We’ll never get this opportunity again,” Danny said back to Pete.

Danny told Pete that it was up to him if he wanted to adopt this child with Danny, but no matter what, Danny was committed to it. He invited Pete along for a visit to the foster home, and Pete agreed to see the child.

I was already leaning towards doing it with him anyway. I’d softened up and realized that this was something that we weren’t ever going to get another opportunity to become parents. This was it.

At the visit, Danny held the baby, then reached his arms out to Pete. The child immediately grabbed Pete’s finger.

“I melted. I realized that we were smart, capable men, and we can definitely make this work. I felt overjoyed that we were going to be starting this family together. I just turned to Danny and I said, ‘This is our son.’”

How Two Men and a Newborn Baby Officially Became a Family

On December 20 of that year, Pete and Danny went to the court hearing to tell the judge that they intended to adopt the baby. She offered for them to take the child for a holiday visit, meaning they had two days until the baby would stay with them.

That night, Pete and Danny discussed names and decided to name the child Kevin.

“My parents had had a baby before me that died at birth, stillborn, who they named Kevin. Since I was the next child they had, I always felt that I was being protected by this Kevin, like a guardian angel,” Pete said. “We told my parents and my mom broke down in tears of joy. How could they have ever in their wildest imaginations predicted that their gay son would have a child and he would name him Kevin, after a baby they lost?”

Pete’s mother, father and sister, who lived nearby in New Jersey, came to New York to help Pete and Danny prepare for the child. They baby-proofed the apartment and created a nursery while Danny and Pete read up on baby books.

The holiday visit never ended, and two years later, the adoption was finalized.

Kevin was such an easy kid to raise. I don’t know how else to say it. We got so lucky. He slept all night. He’s always been a very self-sufficient, self-motivated kid who’s really conscientious. He just came to us that way.

When same-sex marriages were legalized in New York, Kevin was 11-years-old. It was Kevin’s idea for his fathers to be married by the judge who brought Kevin into their home.

I told her that it’s only because of her that we’re a family. I’m incredibly grateful to her that we became a family, and her performing our wedding was just a beautiful moment that came full circle.

Now, Kevin is a senior at a top-ranked college, majoring in computer science and math. He loves to run, compete in ultimate frisbee tournaments, and hike outdoors with his parents.

“Sometimes life hinges on little moments, happy accidents, and miraculous surprises. Sometimes babies are born into forever families. Sometimes they are adopted,” Pete wrote in his children’s book Our Subway Baby. “And sometimes, all it takes to find your family is a chance glance at tiny toes wiggling in the corner of a subway station.”

Like Pete said, family is not always blood-relation. It’s also those who support you, who care for you, who find you in a difficult situation and make it better. Danny and Pete stepped up to save a child they found in a subway station, and now that child is their son.

family can be chosen
Family doesn’t have to be blood related; it can be anyone who consistently shows up and supports you.
Tags
Share
← Prev Post Next Post →