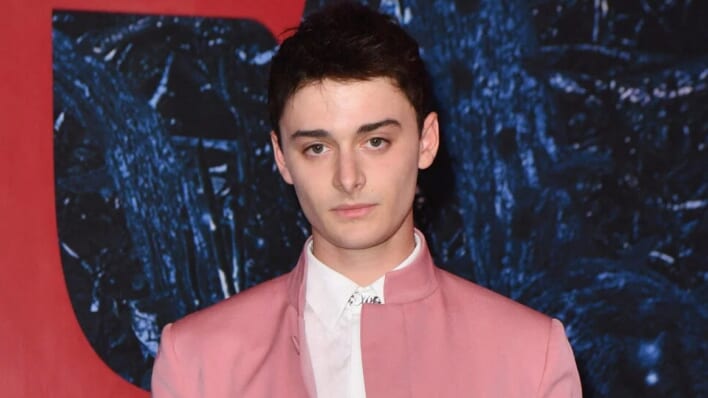 From Noah Schnapp’s role as Will Buyer on Netflix’s “Stranger Things” to his social media presence to his self-made snack brand TBH, there is no denying Schnapp is a sensation. What you may not have expected is for him to have a summer job – and quite a normal one at that.
By Bianca Mercuri    August 28, 2022

From Noah Schnapp’s role as Will Buyer on Netflix’s “Stranger Things” to his social media presence to his self-made snack brand TBH, there is no denying Schnapp is a sensation. What you may not have expected is for him to have a summer job – and quite a normal one at that.

Noah Schnapp is a 17-year-old actor best known for his role as Will Buyers in Stranger Things. He currently has over 25 million Instagram followers as well as a sizeable TikTok following, but that doesn’t even begin to reflect the success that he’s experienced over the last six years working on on one of the top Netflix shows of all time. But what sets Schnapp apart from other child actors is his ability to stay humble.

How does he do this? Well, it has a little to do with SPF and a lot to do with spandex. His ability to lead a normal life is a compilation of all the daily things he’s continued to do despite being one of the most famous teens on our screens. Let’s talk about how Schnapp keeps his life as normal as possible – for a Stranger Things star.

Being one of the most essential pieces to Netflix’s hit Stranger Things is no small feat. Between red carpet premiers, shooting four seasons, and over a billion hours of views, he has his career and finances secured. Schnapp decided that the best way to spend his summer was taking a job as a lifeguard. His summer lifeguarding job is not about money, it’s about humility and being a part of something normal for once.

Of course, Schnapp doesn’t need this (or any) summer job for cash, but it’s about the true experience of being a teenager. “It’s kind of a ‘just for fun thing,’” he told Flaunt. Instead of living the high-rise, fast-paced life of a Hollywood A-lister, Schnapp is choosing to spend his time around people his own age and the people he grew up with. “I’ve kind of grown up with a normal life and normal friends and stuff outside of Stranger Things,” Schnapp said, “So it’s kind of kept me grounded.”

With the hustle and bustle of filming a show like Stranger Things, along with newfound fame at such a young age, it’s vital to connect with real people. Keeping in touch with who you are outside of acting, and finding an identity beyond that is how celebrities keep the fame from getting to their head.

For Schnapp, being 17 and not trying to grow up too fast is exactly what’s kept him grounded for so long. Despite his extraordinary job, he’s an ordinary kid who needs the same love, attention, and downtime with friends as everyone else. His summer lifeguarding job might seem trivial from an outside onlooker, but from Schnapp’s perspective, it’s what helped him maintain his down-to-earth aura.

The Cast of Stranger Things Go to College

Schnapp is making sure to hit every milestone and teenager experience he can. He doesn’t want to miss out on anything, including college. We already heard that his co-star Millie Bobby Brown is going to Purdue University to study human services. But what you may not have known is that Schnapp is going to be attending one of the highest-ranked universities around at the University of Pennsylvania.

He’ll be studying business, a dramatically different path than what he’s currently practicing as a career. And like any other freshman, he’ll be staying in the dorms. Schnapp is expecting to have a typical college experience full of learning and growth. “Acting was just kind of repetitive, and I wanted to try something new,” he said, “I thought it would make more sense to do something different. And business was a pretty clear next thing for me.”

He’s got a point. His snack brand, TBH, is a hazelnut spread that we all know and love but without palm oil. He took something familiar and made it more sustainable and better. This entrepreneurial adventure he’s taken has distinguished himself among his teen acting peers, not because it’s a business venture but because he’s using his platform to create change in the world regarding health and the environment.

“I want to leverage my voice and use it to make a change on this earth,” He said, “it’s always been a passion of mine – health, and the planet, and being environmentally conscious. It’s always been something I’ve cared about.”

Why Noah Schnapp Is a Great Role Model

Schnapp is a much more complex person than we could have ever imagined. A business major, a lifeguard, an entrepreneur, and an activist for change. It’s exciting to see someone so young truly exploring all of their options rather than succumbing to the money of Hollywood.

RELATED: 21 Integrity Quotes to Become your Own Biggest Role Model

Schnapp is a great role model for children, showing them that there’s life beyond what they see on screen, and that life is even more impressive than they can imagine.

Schnapp is well-rounded and that’s the bottom line, and he’s determined to stay that way. For someone who seems so out of reach given his popularity, he’s extremely approachable and relatable which is something to be praised.