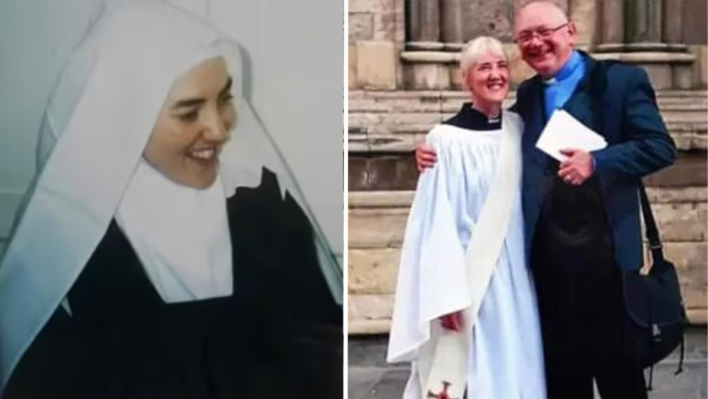 A Nun and a Monk’s Forbidden Love Faced Disapproval – So, They Both Walked Out to Get Married to Each Other

The turn towards a spiritual inner world for many clergy members often requires a certain shunning of the exterior world, and with it, romantic relationships.

Sister Mary Elizabeth, of Middlesbrough, England, once might have agreed with this sentiment, but her world was flipped upside down after one particularly spiritual encounter with a monk.

How a Nun’s Life Changed After She Met a Monk

Sister Elizabeth joined the Carmelite order — an ancient order of the Roman Catholic church — at the age of 19.

According to the BBC , as a child she “would make her own way to one of the Roman Catholic churches in her home town and sit alone in the second pew – where she says she developed an overwhelming love for the Virgin Mary, mother of Jesus, and ultimately a feeling she had a vocation.”

The monastery she eventually joined has origins in the 12th century, and has been noted for a particularly “spartan, secluded, and strict” lifestyle. About her time at the monastery, Sister Elizabeth recalls, “we had two recreation times a day, about half an hour, when we could speak, otherwise you were on your own in your cell. You never worked with anybody, always on your own.”

So when Sister Elizabeth met Robert — a friar from a distant priory– she had no idea how much her life was about to change.

Twenty-four years after becoming a nun, the prioress of Sister Elizabeth’s order brought her along to check on Robert, who was visiting from a priory in Oxford, and likely was in need of a meal. Neither thought anything of the encounter, until Sister Mary Elizabeth’s superior was called away to take a phone call, and the two were left alone.

Apparently, the spark from there was immediate, and undeniable. Sister Elizabeth recounts to BBC that “as she let Robert out of the door, she brushed his sleeve and felt something of a jolt.” She said, “I just felt a chemistry there, something, and I was a bit embarrassed. And I thought, gosh, did he feel that too. And as I let him out the door it was quite awkward.”

RELATED: Black Couple Adopts a White Child – Shows Everyone What It Means to Be Family

She recalls that it was about a week later that she received a message from Robert asking if she would leave to marry him.

Speaking on the swift evolution of the relationship, she continues, “I was a little bit shocked. I wore a veil so he never even saw my hair colour. He knew nothing about me really, nothing about my upbringing. He didn’t even know my worldly name.”

Surely, neither saw this coming, and were both taken aback by the encounter. For such devoutly religious, inward-facing people, their meeting certainly seems tinged by the divine.

The Struggles a Nun and a Monk Faced After Marriage

However, the next stage of their relationship was not without unique struggles. Initially, Sister Elizabeth did not answer Robert’s request, and did not know what to do. Eventually she found it difficult to ignore her feelings, and confessed her feelings for Robert to her prioress.

Her confession was met with disbelief, and soon Sister Elizabeth was faced with a crossroads of sorts. In a flurry of uncharacteristic impulse, she put her few  belongings in a bag and walked out, never to return.

RELATED: White Woman Was Afraid of Her Black Colleague – 73 Years Later, They Fought for Their Love and Are Happily Married

However, on her way to meet Robert at a nearby pub, she recalls feeling a frightening new low point. “The rain was lashing down as I was walking along the Garstang road.

The traffic was coming towards me with bright headlights and I just thought ‘I could just finish this,'” she told BBC, referring to a momentary suicidal thought.

Thankfully, Sister Elizabeth, who reverted to her worldly name Lisa once leaving the monastery, continued on her journey and on to her fateful encounter with Robert at that pub.

Their relationship was hardly smooth sailing after this, with unexpected difficulty transitioning to a life outside of the secluded monasteries they had previously known. They each detail many difficult moments where the weight of their decision fell heavy.

One such moment was at the job center, when they both burst into tears when asked about their transferrable skills — and another time when they were driving from Preston to Yorkshire.

“I had ordered a book in Polish about nuns who had left their orders for various reasons. I read and translated it for Lisa in the car, but she had to pull over on the M62. We both needed to cry because their stories were so emotional and we could relate to them,” says Robert to BBC.

RELATED: Man Passes Away After 41 Years of Marriage – Days Later, His Heartbroken Wife Receives a Letter From Him

Despite the initial difficulty, things seemed to work out for the two, as they eventually married, and now share a home in the village of Hutton Rudby in North Yorkshire — where Robert is a vicar of the local church.

Though they found the transition to married life overwhelming at times, Lisa and Robert overcame the hurdles in their way, and now enjoy a different relationship with their religion.

Lisa says they both agree there are three of them in the marriage. “Christ is at the centre and comes before everything. If we were to take him out of the equation, I think it wouldn’t have lasted really.”

Father Forbids Man From Marrying A Single Latina Mom – Then, The Son Made A Shocking Decision