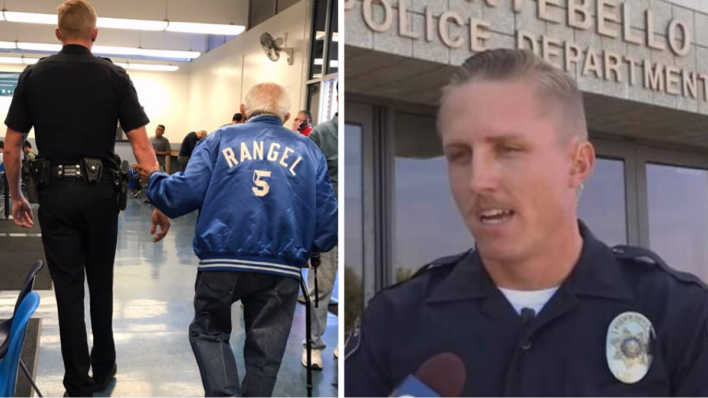 By showing some compassion, one police officer turned a disturbance call into an opportunity for kindness.
By Lindsey Staub    February 11, 2022

By showing some compassion, one police officer turned a disturbance call into an opportunity for kindness.

When Officer Robert Josett was called to a local Bank of America to settle a disturbance in Montebello, California, he didn’t see robbers in black masks with loaded guns. Instead, he saw a 92-year-old man named Jesus Rangel.

The Montebello Police Department took to Facebook to explain what occurred at that Bank of America between Officer Josett and Rangel.

With some fellow officers, Officer Josett arrived on the scene. Luckily, he knew exactly what to do.

“Once officers arrived, Officer Robert Josett decided to take the man to the DMV in town to help him renew his identification card,” the post shared. “With the assistance of the DMV, his identification card was renewed and he was taken back to the bank at which time he was able to withdraw money from his account. He thanked Officer Josett and went on his way.”

An act of care

Instead of arresting the man for disorderly conduct, Officer Josett practiced patience and compassion. He settled the dispute between the bank and the man by helping instead of punishing.

A photo of Officer Josett and Rangel walking through the DMV accompanied the Facebook post explaining the situation. It currently has 278,000 likes and over 85,000 shares.

Thanks Montebello Police Department, things like this are what the communities all over this country needs. Thank you for the example! God bless and stay safe!

“Now that’s how u solve a problem,” wrote another Facebook user. “Many people do not want to get involved. But once you are aware of the problem, you are involved. This is what it means to serve the community. It may not be part of his job responsibility, or above or below his pay grade; but he made it happen. I love people like this.”

Officer Josett explained his thought process when he learned of the issue at the bank and attributed some of the plan’s success to his fellow officers.

[I] kind of just said the idea to take him to the DMV, help him get [his ID renewed], and my sergeant was super supportive. She jumped all over it and kind of streamlined the idea and made it go smoothly.

When he became a policeman, Officer Josett swore to serve and protect. That’s exactly what he did when he helped Rangel withdraw his money. Officer Josett led by example, showing us all that sometimes a person just needs some help and understanding, two things we are all capable of.

choose compassion
“A kind and compassionate act is often its own reward.” – William John Bennett