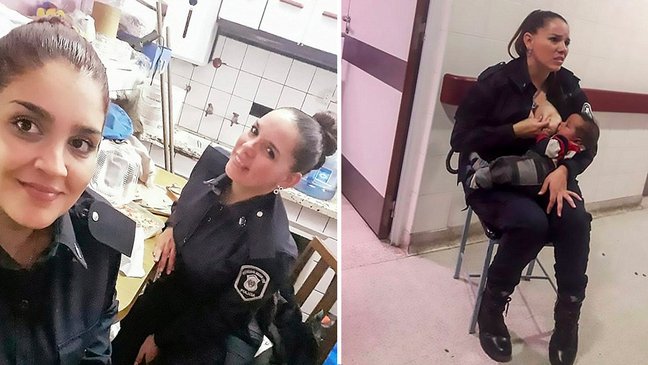 An Argentinian police officer’s gesture of love is receiving recognition from around the world after a photo of her breastfeeding
By Hadassah Alencar    August 23, 2018

An Argentinian police officer’s gesture of love is receiving recognition from around the world after a photo of her breastfeeding a malnourished baby went viral.

Officer Celeste Jaqueline Ayala was working overtime on guard duty when she and her partner Marcos Heredia were called to the Children’s Hospital of La Plata. Social workers had arrived to the hospital with a family who needed urgent care.

The couple’s 6 children were being separated from their parents due to signs of abandonment. The children, who ranged from the ages of 9 years old to 6 months old, were malnourished and severely dirty, and described to have been living in detrimental conditions. Both the parents were described as unemployed and having addiction problems, and were deemed unfit to care for their children.

As Ayala escorted the children to receive care, she noticed the 6-month baby would not stop crying. She described feeling a strong maternal instinct, and asked the caretaker if she could breastfeed the baby since she had a 18 month old toddler whom she was still breastfeeding, and the caretaker approved. Ayala did not hesitate to take the baby and care for her, feeding and showing affection for the baby.

RELATED: Flight Attendant Asks Mom And Crying Baby To Step To The Back – What He Did Next Surprised Them

“I noticed that he was hungry, as he was putting his hand into his mouth, so I asked to hug him and breastfeed him,” she said to Cronica. “It was a sad moment, it broke my soul seeing him like this, society should be sensitive to the issues affecting children, it cannot keep happening.”

In the interview, she was asked what she felt about having to separate the children from their parents, and what was going through her heart at that moment.

“When the children arrived at the hospital, and we saw their situation, we could not stop crying. The kids would cry and we would cry… later the children calmed down, and we played with them” She explained how they helped to ease the children by using office chairs to play with kids and roll them, and this helped their treatment to go smoother.

Her act of compassion was recorded by her partner, Heredia, who praised her in an endearing message honoring Ayala’s selflessness:

“I want to make public this great gesture of love that you had today with that little baby… who without knowing you didn’t hesitate and for a moment you fulfilled how if you were her mother. You don’t care about filth and smell… things like that don’t [happen] every day.”

The post went viral and has been shared over 162K times, and has earned her numerous tributes from organizations in Argentina and abroad. The fire department where Ayala volunteers honored her act of compassion:

“Actions like that of this cadet fill us with pride and force us to redouble our efforts, work and solidarity with our community,” the department wrote on Facebook.

Cristian Ritondo, minister of security of the Province of Buenos Aires, met with Ayala in person to announce her promotion from officer to sergeant, writing in a Twitter post:

“We wanted to thank her in person for that gesture of spontaneous love that managed to calm the baby’s cry. The police that make us proud, the police we want.”