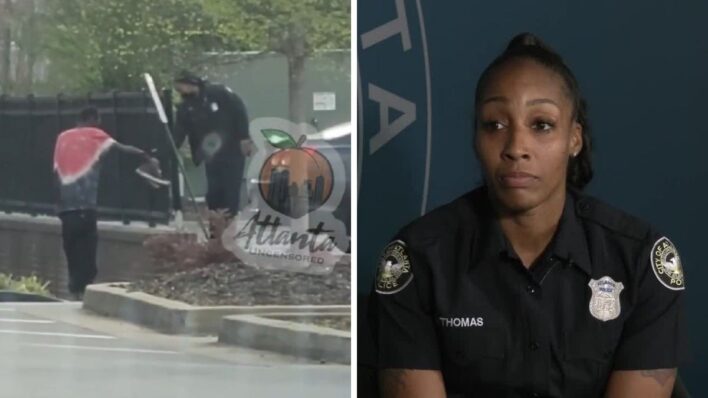 Police often make the news for all the wrong reasons these days, but a random act of kindness from one
By Joel Balsam    September 8, 2021

Police often make the news for all the wrong reasons these days, but a random act of kindness from one officer proved to be a refreshing, heartwarming change.

Atlanta Police Officer Sheretta Thomas was on patrol one day when she noticed a man walking around in the rain without any socks or shoes. “So, I asked him if he would be still here when I came back and I would go and grab a pair of shoes for him,” she said in an interview with the Atlanta Police Department.

Thomas could have just left the man to fend for himself, but she did something special. She went out and bought the man a pair of shoes.

“I’m a sneakerhead,” Thomas explained. “I love shoes, so sometimes I may put shoes in my trunk to give to people who may need them. It’s never a time I don’t think of others.”

But when Thomas returned to give the man the shoes, he was gone.

She gives simply because she can

It turns out Thomas would get another chance at doing a kind thing. When on patrol another day, she saw a different man with no shoes. So she quickly ran to her car and brought the man the sneakers from her trunk.

Little did she know, the officer was being filmed and her kind deed went viral before the video was eventually taken down.

With tears in her eyes, Thomas revealed her motivation for gifting the shoes.

“I haven’t always been able to give. So now that I’m able to, I just like to help.”

“I was just being kind and doing what I enjoy doing and that’s helping people who are really in need,” she added.

The police department is proud to have her

“This week the Atlanta Police Department learned that one of our officers was unknowingly filmed by a bystander as she gave a barefoot man a pair of shoes,” the post reads. “Officer Thomas’ actions reflect a level of kindness that comes from within. We could not be prouder to have her as part of our APD family.”

While it is unquestionably true that police officers are capable of doing some truly awful things — as we’ve seen time and time again — they are also members of our community with the capacity to help, as seen in this story.

Now, could they help with a lot less funding? Probably. But that’s a debate for another day. What this story shows is the kindness of one woman whose good deed is a reminder for us all about how important it is to give. And that goes for those with and without a badge.