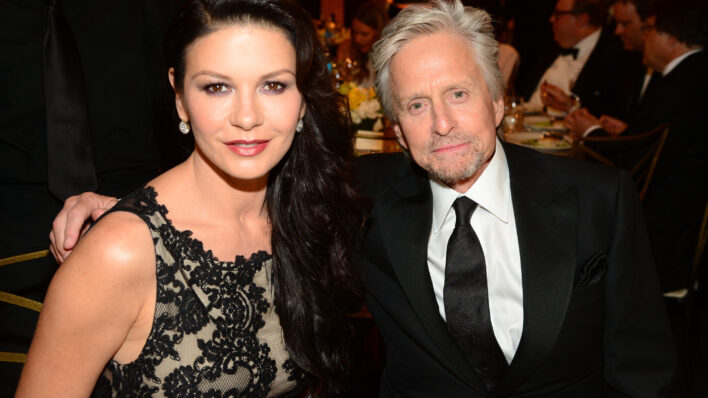 Welcome to #RelationshipGoals, where we’re giving the stage to the power couples we admire. From admirable long-term relationships to inspirational
By Matt Valentine    February 22, 2019

How long do you have to be with someone before you begin to forget how long you’ve been together? Twenty-two years, apparently.

At least, that was true in the case of one of Hollywood’s most iconic power couples, Catherine Zeta-Jones and Michael Douglas.

“We met in 1996 at the Deauville Film Festival…I think it was 1996!” Zeta-Jones told Larry King in a 2011 interview. “I had been told Michael Douglas wanted to meet me. I was a little nervous because I didn’t quite know what he wanted to meet me about.”

After mutual friends and former couple Antonio Banderas and Melanie Griffith introduced the two at a private dinner for the premiere of Zeta-Jones and Banderas’ film Zorro, they hit it off. However, it was Douglas who, as he tells it, nearly blew his chance.

“I met her in the bar and was a total gentleman,” he says recalling the night they met.

Shortly after making her press rounds, Zeta-Jones joined Douglas once again at the bar before the night had ended. “I said to her after about half an hour, ‘You know, I’m going to be the father of your children.’ It sounded good, and she said, ‘You know, I’ve heard a lot about you and I’ve seen a lot about you, and I think it’s time I say goodnight.'”

The next day, Zeta-Jones flew out of town. But Doulgas didn’t give up– “[I] got her some flowers and an apology—anyway, so I guess it worked out OK!”

Nearly a year later, the two were speaking constantly and having frequent dinner dates.

“Nine months later, I’m still having long conversations with him on the phone, having great dinner dates, constantly wondering, ‘Why are we not together?'” said Zeta-Jones.

“When my mother was telling me about men and telling me the facts of life, she never actually put an age bracket on [love]. And it’s so funny, because Michael and my parents are the same age. So, my parents, whenever they see us together, never even question that there was a 25-year age difference,” she says.

And two years later, both hole up with the flu in Douglas’ Aspen home, Douglas himself proposed to Zeta-Jones on New Years Eve of 1999, just a month prior the couple announcing that Zeta-Jones was pregnant with their first child together.

Later that year, the couple was married at the world-renowned Plaza Hotel in New York among the likes of Tom Hanks, Goldie Hawn, Jack Nicholson, Brad Pitt, Barbara Walters, Steven Spielberg, a slew of other A-list celebrity guests, and, most importantly, their now four-month-old son Dylan.

“I don’t take any of this for granted. When I look at Michael, I run around like a little girl. I can’t believe I came into his life and he came into mine,” she said in an interview with People.

Nearly three years later, before the couple’s second child, daughter Carys, was born on Easter Sunday of 2003, they decided to pack up and move to Bermuda. “I’ve gone there all my life,” Douglas told Forbes. “My mom’s family has been in Bermuda pretty much since the island was settled. My first birthday was in Bermuda and I’ve been going there ever since. It’s always been a special place to get together with family and friends.”

It was here that Zeta-Jones and Douglas would plant their flag, with the two wanting somewhere ideal to raise their children around lots of loving family.

In fact, the island offered such a perfect refuge that daughter Carys didn’t even know her parents were famous until they moved when she was older.

“I thought my dad was a pancake maker,” Carys told Town & Country. “I didn’t know he was an actor. Honestly.”

By the time Zeta-Jones, Douglas, and the family had decided to move back to New York, it was 2009 and the two had been married for nine years.

Daughter Carys, now 15, told Town & Country that the shift was difficult for her and the rest of the family. “I hated it…I used to get really upset. [Paparazzi] would jump on the subway and sit right in front of me. I was, like, 6. I was confused.”

But that was only the beginning of their challenges. A year later, Douglas was diagnosed with throat cancer and underwent both chemotherapy and radiation treatment.

“It really knocks you out,” Douglas said in an interview with People. “The hardest part is seeing his fatigue, because Michael is never tired…If there’s anything Michael has, it’s strength,” said Zeta-Jones.

By January of 2011, Douglas was remarkably declared cancer free. However, the couple’s health challenges weren’t over as just three months later Zeta-Jones entered herself into a mental health facility to treat her bipolar II disorder, the first of several visits to treat the disorder.

“I’m not the kind of person who likes to shout out my personal issues from the rooftops. But with my bipolar becoming public, I hope fellow sufferers will know it’s completely controllable,” she told InStyle. “I hope I can help remove any stigma attached to it.”

“She’s doing a really good job of getting balanced,” Douglas told People. “I’m proud of her.”

Surprising everyone, it was revealed that the couple had quietly separated several months later. However, before the end of the year, the couple had found each other once again and were stronger than ever.

However, in a true test of their bond, Zeta-Jones stuck by her husband’s side with an openness that she says defines their relationship.

“Michael came out with that preemptive statement. He was articulate, said it from the heart. He was honest, open and transparent,” she said while appearing on an episode of The View.

The challenges that Zeta-Jones and Douglas have had to weather over the past decade have been great. However, they’ve only seem to make them stronger together than ever.

But despite how crazy they are for one another, each understands that relationships take work.

“It’s a long road, and I think people today are so quick to throw in the towel on marriage,” Zeta-Jones told Good Housekeeping. “You have to give it your best shot and not give up when the first problem arises, because that won’t be the last problem.”

This past November, the iconic couple celebrated their 18th wedding anniversary.

Zeta-Jones marked the occasion on Instagram with a simple black and white photo of the couple and a caption, “18 years.💕.”

As for what she believes has been the secret to their long and happy marriage? Honesty and openness, she says.

“Both Michael and I have a very open relationship,” Zeta-Jones said in an interview with Today. “When you have kids that didn’t ask to be born into a world where [the marriage is] scrutinized or looked into, you’ve got to be open and honest and share things that probably people at the drug store wouldn’t share over the counter.”

“I’m a big European kind of family girl, and so everything is shared around the table,” she continued. “Issues with my daughter if she’s feeling insecure– she’s a teenager and girls can be mean. My son’s going off to college. And then you just clear the air. Everyone knows what’s going on. There are no surprises.”