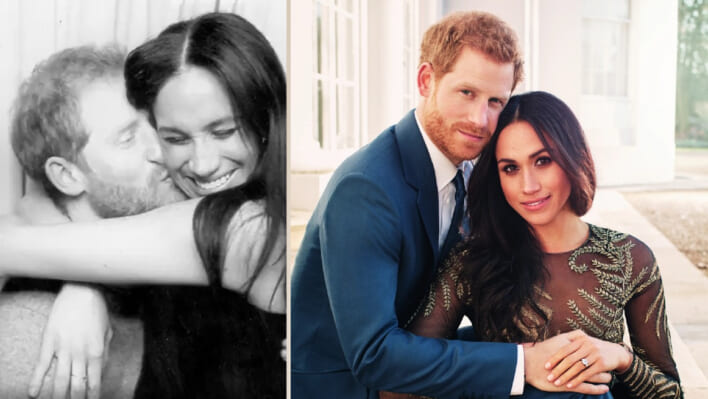 The Royal family secrets are aired during the new “Harry & Meghan” Netflix Docu-series. What did Harry and Meghan Markle say about their blue-blood experience and what can they teach us about setting healthy boundaries?
By Bianca Mercuri    December 31, 2022

The Royal family secrets are aired during the new “Harry & Meghan” Netflix Docu-series. What did Harry and Meghan Markle say about their blue-blood experience and what can they teach us about setting healthy boundaries?

Prince Harry and Meghan Markle had been slowly separating themselves from the royal family over the last few years. The rumored animosity between the couple and their royal relatives has put a damper on their relationship and also on the way that the public views the monarchy as a whole as themes of racism have also been in question. The bombshell of the couple leaving their roles in the royal family shocked the world and sparked controversy.

RELATED: The Truth Behind Meghan Markle’s Relationship With Her Parents

The death of Queen Elizabeth II brought up the gossip once again. Between Markle’s “Archetypes” podcast, and the plethora of “anonymous sources” that have commented about what’s gone down, it’s hard to decipher what’s true or not. Well, Markle and Prince Harry’s new Netflix docu-series spilled some piping hot, British tea. Here’s what Markle and Prince Harry have done to set healthy boundaries for themselves.

The docu-series holds the crown for highest Netflix documentary debut.

Prince Harry jumped into the Harry & Meghan docu-series headfirst, quickly addressing his decision to give up his royal title. When this happened in real-time, the world nearly stood still. It’s been almost unheard of for royal blood to deny their lineage. But, Harry had some pretty good reasons for doing this.

“My job is to keep my family safe,” he said in the docuseries, “But the nature of being born into this position amid everything that comes with it and the level of hate that is being stirred up in the last three years, especially against my wife and my son, I’m generally concerned for the safety of my family.”

RELATED: How Meghan Markle And Prince Harry Navigated The Grief Of A Miscarriage

There had been gossip circulating about the royal family showing racist tendencies and ideals toward Markle and her son. The media itself perpetuated some of these narratives but from what Harry had to say, it seems as though there might be some truth to that.

While Markle also made comments in her interview with Oprah Winfrey about racism in the royal family, Harry has also confirmed the presence of discrimination. Harry calls out an “unconscious [racist] bias” in the Windsor family which ultimately prevented the royal family from understanding why Markle and her son would need more protection as they were mixed race and being targeted heavily in the media. That being said, Harry stated that he is “really proud” about his children being of mixed race.

Meghan Markle’s Struggle with Mental Health and Lack of Support

Markle opened up about her suicidal ideation in the docuseries, shedding light on how her mental state was deteriorating during this time. She had previously opened up to Winfrey about her mental health struggles as well, but this particular comment felt more shocking than the last. “It was like, ‘All of this will stop if I’m not here,’ and that was the scariest thing about it,” Meghan had explained in the docuseries, “That it was such clear thinking.”

She expressed this to her husband who claimed he was “devastated” once he really understood how dark it had gotten for Markle. “We were both struggling,” he said, “But I never thought that it would get to that stage and the fact that it got to that stage, I felt angry and ashamed.” Princess Diana, Harry’s mother, had gone through some similar media scrutiny that left her vulnerable. Harry has seen people he loves fight this battle before.

But, he also talked about his mishandling of this situation the first time around and his lack of support – as well as how much he now regrets it. “I didn’t deal with it particularly well. I dealt with it as institutional Harry as opposed to husband Harry. I had been trained to worry more about what are people going to think if we don’t go to this event, we are going to be late.” He said, “Looking back on it now, I hate myself for it. What she needed from me was so much. More than I was able to give.”

Harry wasn’t the only person that failed her at this time in terms of support. Markle explains that she wanted to seek help while still a part of the royal family but “she wasn’t allowed to” because “they were concerned about how that would look for the institution”. The couple also says that the royal family didn’t understand why she couldn’t deal with it when everyone else had previously, but what they didn’t understand was how different it was for Markle. Not solely because of her internal conflicts but because of the harrowing media coverage that was going on at the time. She was ultimately left to fend for herself.

How Prince Harry and Meghan Markle’s Boundaries Shifted their Situation

Harry and Markle needed things to change, and when they were denied help from their royal relatives, they decided to do it themselves. They decided to leave. This decision was hard for many reasons, including the fact that it was going to distance him from his family. But we always talk about leaving toxic relationships and family relationships also count in this.

A relationship goes two ways, and all the things that bond people together such as support, love, and trust, were ultimately non-existent between Harry and his family at that point. His child and his wife had their general security in question and Harry needed to protect them since no one else had the courage to do it. Markle was in a toxic relationship with the royal family, and in many ways, so was Harry.

RELATED: Meghan Markle Shares Cake With Waiting Children in New Zealand, Reminds Us That Kind Gestures Don’t Have to Be Grand

Even when this is the case, and even when the solution seems crystal clear, it’s never hard to set a boundary that shouldn’t have had to exist in the first place. It’s not in our nature to abandon the life we knew and the people in it, but if it’s harming someone you love, or yourself, then we have to put limits in place to protect ourselves.

Harry and Meghan made some difficult decisions and placed some drastic boundaries in place to protect their peace, their lives, and their marriage. While this couldn’t have been easy, sometimes in the long run, setting boundaries with family and friends is the only thing to do.