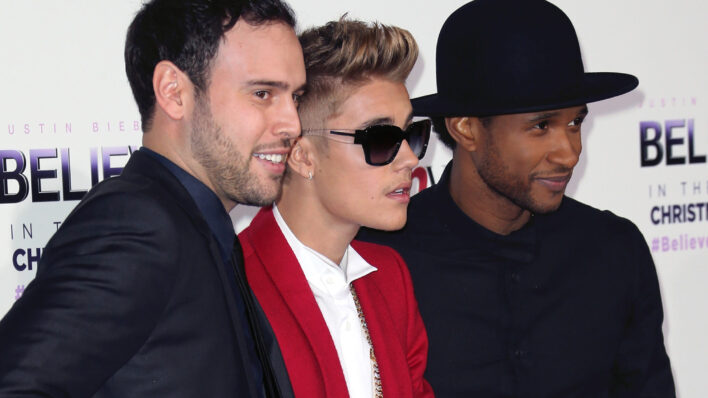 Scooter Braun is the type of person you’d be wise not to second guess. Best known as the manager who,
By Jenny Medeiros    September 19, 2018

Scooter Braun is the type of person you’d be wise not to second guess. Best known as the manager who, against all odds, took Justin Bieber from YouTube to superstardom, Braun is arguably one of the biggest managers in pop.

Aside from Bieber, Scooter Braun is the founder of School Boy records and currently manages top artists in the music industry such as Ariana Grande, Kanye West, Carly Rae Jepsen, Martin Garrix, and Psy. But he wasn’t always a powerful player in the entertainment industry with money to spare.

Before all the fame and fortune, Braun was just a young boy getting into fist fights and dreaming of taking his basketball skills to the NBA. Driven by the personal quest to prove everyone around him wrong, Braun’s perseverance led him from failed childhood dreams to an affluent lifestyle dedicated to “inspiring others to try”.

From having swastikas scratched into his car by vandals to making Time magazine’s list of “100 Most Influential People,” Scooter Braun’s journey to success is filled with valuable life lessons, fresh perspectives, and Braun’s resounding belief that, “the only real legacy in life is family and charity.”

This is his story.

Scott Samuel “Scooter” Braun was born on June 18, 1981, in New York City to conservative Jewish parents. He and his three siblings were often told the story of how their grandparents had barely escaped the Holocaust and had fled to the US in the 50s. Their family history was a constant reminder that the world would not always be on their side.

Braun learned this lesson soon enough when neighborhood kids would taunt him with anti-semitic slurs, a recurring situation which usually ended in fist fights. He also found a swastika carved in his family’s car after he had been elected class president in high school.

Nevertheless, Braun tried to lead a happy childhood. He developed a passion for basketball and would bury his nose in countless Superman comics. Although his biggest hero was his own father, who gave him a piece of advice he’d never forget.

Braun recalls the day like it was yesterday. When he was just 14, his father pulled him aside and told him, “You’re a liar.” His father went on to say, “Because you’re so good at lying, you’ll probably go through life and be incredibly successful. But you’ll always know that you’re a liar. Or you could go the harder route and find the same success knowing that you did it with integrity.”

Young Braun didn’t sleep that night. The next morning, he walked up to his father and told him he wanted to be a man of integrity instead. It was a turning point in his mind and a principle he continues to live by today.

At 18 years old, Braun went to Emory University in Atlanta with the goal of earning a degree and playing his way into the NBA. While studying, he began to think up ways of earning some spending money. So he started his very first business with a friend, selling fake IDs to party-goers.

Unfortunately, the partnership only lasted two months and Braun left a few weeks before his friend was caught for using his real name. Braun needed a new source of income that wasn’t against the law, so he began going to nightclubs and organizing parties for them.

His very first party earned him $800, a clear sign that he could actually make this work. He organized more and more parties in different nightclubs, making a name for himself as the biggest party promoter on campus and beyond. At this point, he had realized basketball wasn’t his strongest suit, so he quit the sport and dedicated himself to the party business.

Meanwhile, at college, his grades were dropping. Braun quickly consulted with an academic advisor on campus on how to manage his new career and his studies. The advisor bluntly told him his “chances of succeeding at both were one in a billion.” So, when producer and rapper Jermaine Dupri asked Braun to become the head of marketing at his label So So Def, Braun said yes and swiftly dropped out of college.

If you’re not going to do it to the best of your ability, then don’t do it at all.

Where it really began

At just 19 years old, Scooter Braun was a star in his new role. His “crazy ideas” about using social media to promote artists weren’t welcome at the label, though, and after a few years, Braun decided to branch out and go his own way.

RELATED: The Power of Starting From the Bottom: Why Being Disadvantaged Is Your Biggest Strength

With his funds quickly running out, Braun tried his hand at freelance consulting. Eventually, he scraped enough together to set up his own management company and began hunting for new talent on the internet. He soon stumbled across the rapper Asher Roth on MySpace. With no time to lose, Braun flew Asher out, found him a place to live and paid for his bills.

In a similar fashion, while consulting for signer Akon, Braun came across a clip on YouTube of a 12-year-old Canadian kid singing at a talent show. He tracked down Bieber’s mother and convinced her to come to the US with her son. Again, he set them up in a house and paid all their bills.

Braun estimated he had enough savings to keep this up for about 14 months. But when the 11th month came by, his funds were already drained.

A lucky break and a struggle While Scooter Braun worked day and night to promote Bieber to L.A. executives who refused to sign on a YouTuber, his other client Asher Roth walked in with a miracle.

Roth’s song ‘I Love College’ earned a publishing deal that saved Braun’s failing company. In a Blueprint interview with Complex, Braun describes this turnaround moment by saying, “It just shows you how close success and failure lie.”

Braun also began making leaps and strides with Bieber, taking his YouTube following from 60,000 to 66 million. He eventually got the Canadian singer signed with a label and convinced Usher to be his spokesman.

With passion and perseverance, Braun had successfully achieved what his colleagues at So So Def had long scoffed at. He had turned not one, but two independent artists from social media websites into world-renowned stars and has continued to do so with many others ever since.

But his string of good luck didn’t last long. When Justin Bieber turned 18, his personal life began to spiral with the help of drugs and misdemeanors. While many managers would have jumped ship at this point, Braun, who has the word “Family” tattooed on his wrist, was determined not to give up on him.

RELATED: 3 Secrets to Persevering (When All You Want to Do Is Give Up)

Gradually, Bieber began to rehabilitate himself and his public image. He found strength in his Christian roots and vowed to stay clean. With both Braun and Bieber coming from deeply religious backgrounds, Braun supported Bieber until he was firmly back on his feet again.

Worst case scenario: you fail. No one is paying attention. Try again.

Branching out beyond music

“Daddy let’s take another one!” Best day ever ❤️

With a solid reputation as a manager in the music industry, Braun began to set his sights on other endeavors. His company branched out into movie and television production and tech investing (including Uber, Spotify, and Dropbox). He even has a stake in a new comic-book movie studio called Mythos.

However, the glamour of his current lifestyle hasn’t distracted him from his real reasons for succeeding: his family and the ability to give back. Every venture he undertakes must align with a charitable cause or he simply won’t do it.

With this in mind, Braun partnered with his brother’s nonprofit Pencils of Promise to build schools in developing countries. He is also known for organizing large-scale events to raise funds for hurricane relief. Most recently, Braun and George Clooney helped set up ‘March for Our Lives,’ a student-led demonstration in Washington D.C. advocating for stricter gun laws.

Scooter Braun is undoubtedly in a place of privilege nowadays, but his family history has taught him that taking action and caring for our neighbors is more important than seeking riches. He continues to act as a “big brother” to his clients and has shifted his life’s focus from work to his family.

While his career has certainly taken a few surprising twists and turns, his belief in himself and his own potential to change the world continues to inspire others to do the same.

Chasing what’s reasonable in life isn’t gratifying. Whatever is holding you back, just go for it because tomorrow’s not promised.